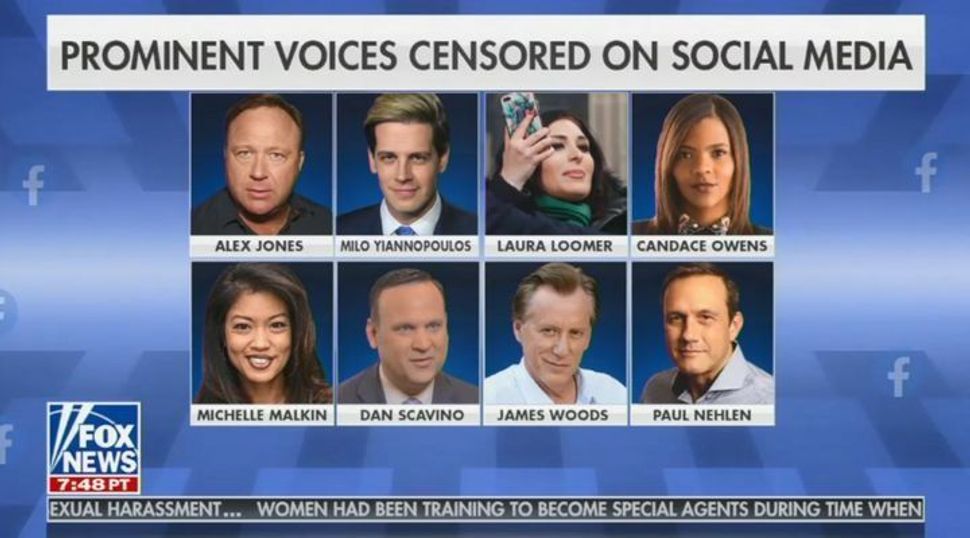 A graphic on Fox News Channel listed white supremacist Paul Nehlen as a prominent voice that had been censored by social media companies. Image by YouTube

Fox News Channel host Laura Ingraham listed white supremacist Paul Nehlen as a “prominent voice” in a segment on her show on Thursday.

During a segment claiming that liberals are trying to “silence conservative voices” on Facebook ahead of the 2020 election, a graphic listed Nehlen, as well as other far-right figures like conspiracy theorist Alex Jones and provocateurs Milo Yiannopoulos and Laura Loomer, as “prominent voices censored on social media.”

Many of those shown on the graphic were banned from Facebook earlier this month in what the platform said was a ban of accounts that “promote or engage in violence and hate.”

Nehlen had been banned from Twitter last year after Photoshopping the face of a dark-skinned caveman on the body of Meghan Markle, the Duchess of Sussex. Over the last two years, Nehlen has debated fellow white nationalist Patrick Little over the best way to start a race war, blamed “Jewish media” for unfair press coverage and published an enemies list of Jewish journalists.

The graphic preceded an interview with conservative commentator Candace Owens, who had been suspended from Facebook for a day after a user flagged one of her posts as inappropriate.

A Fox News spokesperson released a statement on Friday criticizing those who found issue with Nehlen’s inclusion.

“It is obscene to suggest that Laura Ingraham was defending Paul Nehlen’s despicable actions, especially when some of the names on the graphic were pulled from an Associated Press report on best known political extremists banned from Facebook,” the spokesperson said. “Anyone who watches Laura’s show knows that she is a fierce protector of freedom of speech and the intent of the segment was to highlight the growing trend of unilateral censorship in America.”