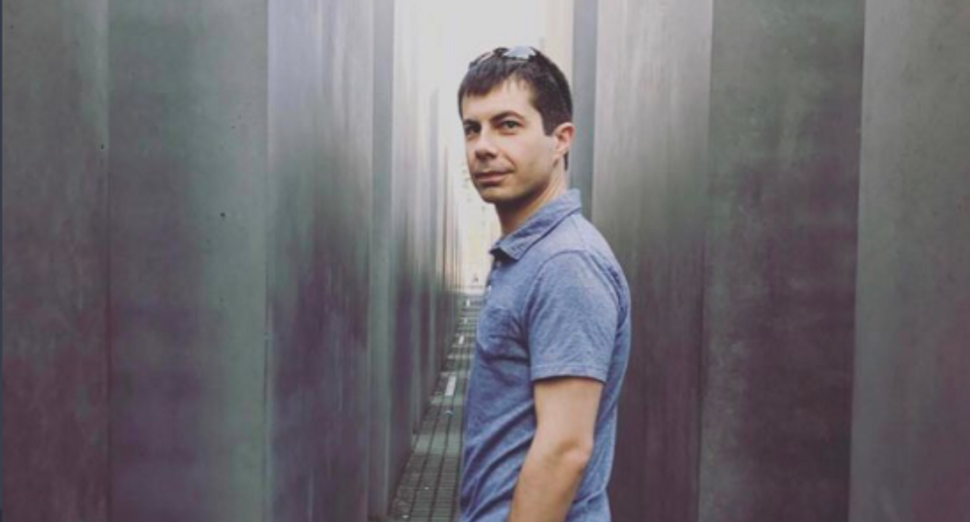 Democratic presidential candidate and South Bend, Indiana mayor Pete Buttigieg was criticized on social media on Sunday after a 2017 photo was resurfaced that showed him posing at Berlin’s Holocaust memorial.

The photo, taken by his husband Chasten in 2016, showed Buttigieg posing among the stones at the Memorial to the Murdered Jews of Europe. Chasten Buttigieg’s caption: “This guy.”

Buttigieg is the Democratic candidate with the most support from American Jews, according to a Forward analysis from July. But he has been criticized by some Jews for promising to put conditions on military aid to Israel.

This kind of thing has happened before. The singer Pink, who is Jewish, was criticized earlier this year for posting Instagram photos of her children running between the stones. And selfies taken there and at the Auschwitz concentration camp in Poland have long been criticized by many Jews upset that visitors don’t appreciate the sites’ gravity.

Indeed, the photo of Buttigieg, and particularly the accompanying caption, attracted criticism on social media:

And here’s a taste of the reaction: pic.twitter.com/yfHzWoSCfG

I don’t think taking a picture there necessarily has to be disrespectful. But when you see it came out looking like a fashion shoot, maybe don’t post that.

It’s wrong to judge Mayor Pete for taking a touristy photo at a Holocaust memorial. It’s a personal picture posted to his husband’s Instagram account, and not an official campaign photo, which surely would have had a person of color photoshopped in next to him.