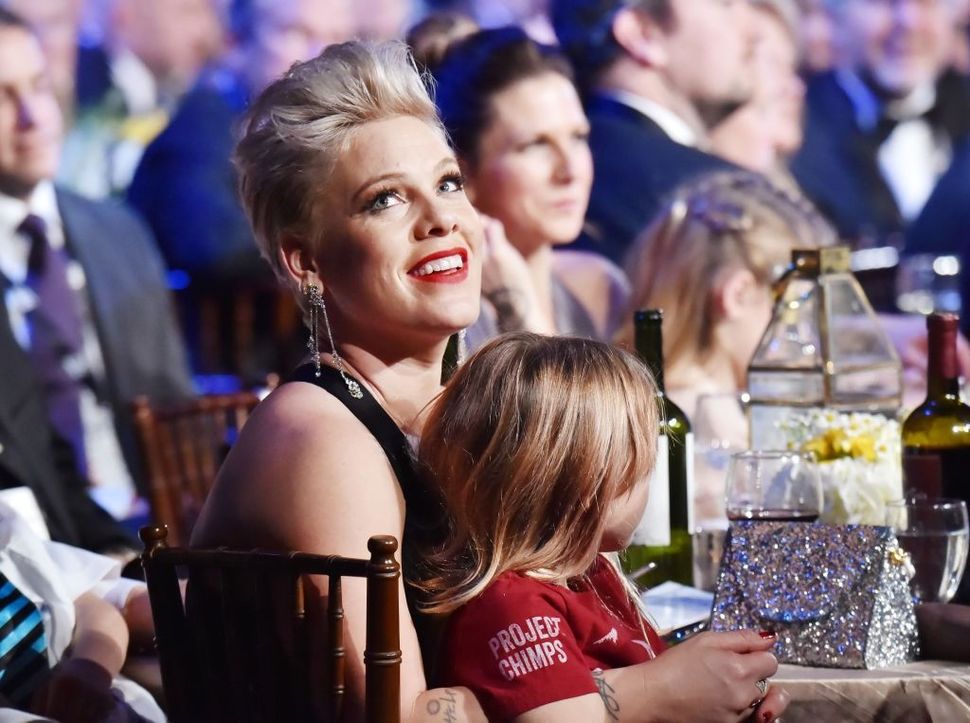 Singer Pink with her daughter Willow Image by Getty Images

The 39-year-old artist Pink (she named herself after a Steve Buschemi character, for what it’s worth) vacationed with her family in Berlin, where they visited the Berlin Cathedral, and the singer enjoyed a mixology class. The singer and her husband, motocross racer Carey Hart, also took their children to Berlin’s Memorial To The Murdered Jews Of Europe, a massive art piece that honors the six million European Jews who were murdered during the Holocaust.

There, among the 2,711 concrete coffin-like slabs, Pink and Hart’s two and eight-year-old children chased each other joyfully through the shadows. Pink, whose given name is Alecia Beth Moore, shared the picture on social media with a powerful explanation.

Berlin, I love you. #holocaustmemorial #panamarestaurant #cocktailclasses #history #herstory #worldtour and for all of the comments; these two children are in actuality Jewish, as am I and the entirety of my mothers family. The very person who constructed this believed in children being children, and to me this is a celebration of life after death. Please keep your hatred and judgment to yourselves.

“For all of the comments; these two children are in actuality Jewish, as am I and the entirety of my mother’s family,” Pink wrote. She is a celebrity who is rarely associated with Judaism, despite having been clear through her decades-long career that she has a Jewish parent. She went on, “The very person who constructed this believed in children being children, and to me this is a celebration of life after death. Please keep your hatred and judgment to yourselves.”

Her reference is to American architect Peter Eisenman, who won a competition to design the memorial in 1999. “We cannot comprehend what happened,” Eisenman said, of the Holocaust. “It makes us helpless. And the monument lets one experience something of that helplessness.” But the giant memorial, set in the heart of the city, was designed to serve as a center of life and death. “Children play hide-and-seek here, young people take ‘selfies’ and couples kiss,” DW Magazine wrote of the memorial on its tenth anniversary. And Eisenman told told the publication “he likes it all.” It was never his intention to create a “sacred place,” but rather, “something banal.”

Selma Blair, a Jewish actress who has recently spoken movingly about living with multiple sclerosis, commented in support. “I love Berlin too,” she wrote to Pink. “I love that what happened is not being forgotten. I love this celebration of life. I love you.”

“These children are learning their history,” added an Instagram commenter, who identified herself as a descendent of victims of the Holocaust and a friend to some who have been victims of mass shootings in American synagogues. “It gives me joy to see children enjoying life and continuing on when so many died.”

Another woman commented on the post, referencing her experience as a child visiting Westerbork, a transit camp where Jewish prisoners, including Anne Frank, were held captive. “I was running and singing around and my mother tried to stop me,” she wrote. “Until an old man said: Please let her joy fill this place. I survived this place, please let your daughter celebrate her freedom this way.”