Amid coronavirus pandemic, Holocaust survivors at special risk — and getting extra help 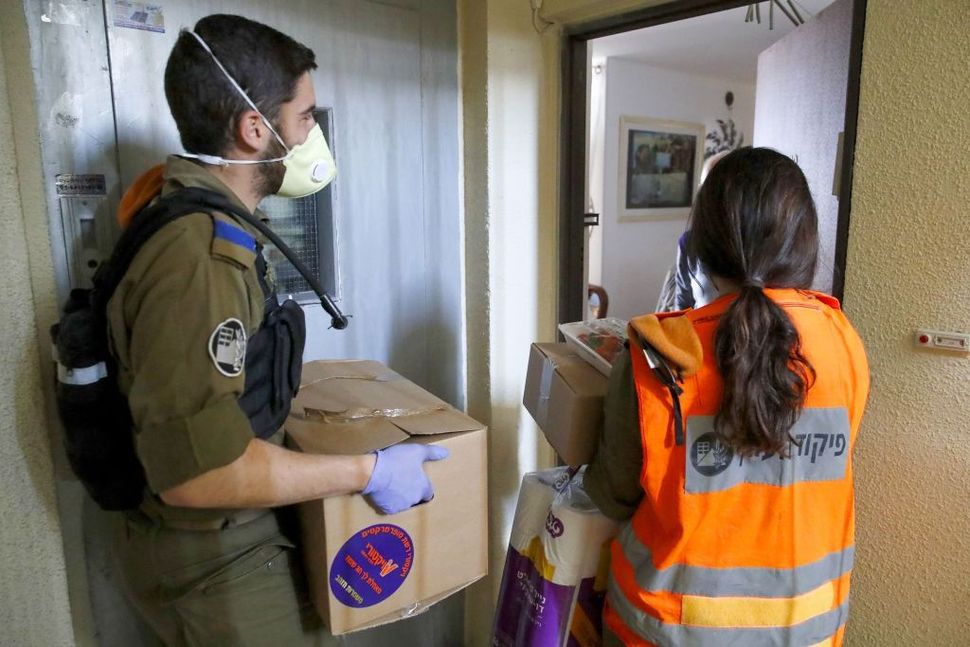 Israeli soldiers deliver food and other essential supplies to elderly people under isolation in the Israeli coastal city of Bat Yam on April 7, 2020. Image by JACK GUEZ/AFP via Getty Images

(JTA) — Earlier this year, when the coronavirus pandemic began to unfold in Asia and appeared destined to hit the United States, the Jewish agencies that deal with America’s most vulnerable Jewish populations decided they had better get ready.

Holocaust survivors, whom many consider to be the most vulnerable of the vulnerable, were of grave concern. Due to their advanced age — the vast majority are in their 80s and 90s — survivors are at particularly high risk of experiencing the virus’ life-threatening complications.

What’s more, the quarantines accompanying the pandemic have compounded the crisis for survivors, many of whom were socially isolated before the virus hit. They’re also at heightened risk of emotional distress.

“I am very much reminded of being in Auschwitz, with all the fear of going out, and that there may not be food to eat,” said Sam Schwartz, a 92-year-old survivor of Auschwitz who lives in South Florida’s Palm Beach County.

Now the social workers, case managers and volunteers who help survivors on a daily basis, including local Jewish federations, Jewish Family Services and other federation-supported agencies, are mobilizing to address the survivors’ physical and emotional needs.

“Many are anxious during the best of times,” said Shelley Rood Wernick, managing director of the Center for Advancing Holocaust Survivor Care at the Jewish Federations of North America. “One-third live in poverty. Some have poor bone health, poor dental health. And then imagine a survivor being unable to get food and medicine, even if they have the funds. That produces extra anxiety. Many are hesitant to ask for help, to admit vulnerability, because during the Holocaust vulnerability led to death.”

In Chicago, staffers from the Jewish social service agency CJE SeniorLife are reaching out in both English and Russian to more than 1,700 clients.

“Even those who are bilingual tend to revert to and find comfort in communicating in their native language,” said Yonit Hoffman, director of Holocaust Community Services, a Jewish United Fund of Chicago program administered by CJE SeniorLife.

Due to the social distancing restrictions, survivors who attended in-person programs that provided social interaction, activities and a nutritious hot meal can no longer do so. Their sense of isolation is compounded by the fact that a significant percentage aren’t tech savvy.

“Many of our survivors don’t use technology,” Hoffman said. “For those who do, we are asking them to let us know, so we can virtually ‘see’ them through Zoom, Skype or other platforms. We’ve been able to hold some of our support groups through Zoom or conference calls, so that survivors can see or hear each other – and know we are there for them.”

Some service agencies are mailing out written instructions on how to use the technology or walking their aged clients through the process by phone. The Chicago program is also trying to relaunch an initiative in which survivors telephone one another, an act that helps both the caller and the person called to feel less alone.

Hoffman worries that some of the survivors’ caretakers may not be able to provide the necessary support during this crisis.

“What happens when either the caregiver or survivor gets sick?” Hoffman asked. “What happens if family members who are delivering food aren’t able to do so, whether due to illness or new restrictions? And what if a relative who provides financial support suddenly loses his or her job? Who knows what’s coming down the pike in the coming weeks?”

She added, “Holocaust Community Services will of course be there for them if that happens, but possibilities like those make a highly stressful situation even more challenging for the survivors and those caring for them.”

Staffers have been making hundreds of weekly well-being calls to survivors to make sure they are OK, and to be proactive with needed financial and functional assistance. Simply knowing that they’ll get a phone call checking in on them can be reassuring, Hoffman said.

This week, each survivor will receive a package with bilingual resources and information, masks, gloves and a little extra financial help to purchase food, medication and supplies.

In Palm Beach County, which has one of the largest concentrations of survivors in the U.S., case managers from Ruth & Norman Rales Jewish Family Services — the Jewish Federation of South Palm Beach County’s primary beneficiary provider of human services in the area – are finding alternative ways to help the 408 survivors they serve.

Due to the COVID-19 virus, all in-person social activities for survivors, including the regular Nosh and Nachas programs, have ceased, and the heavily used senior center in Delray Beach is shuttered. The Model Seder, usually attended by more than 300 survivors and low-income seniors, was canceled.

Instead, Jewish Family Services is trying to deliver by phone the services that were provided in person, including case management and counseling, volunteer visiting and more. The agency’s critical home health aide service continues using CDC-recommended practices, but a few survivors have canceled the service because they fear personal contact with anyone coming in from outside.

“Survivors always see a second layer in the world not seen by non-survivors,” said Howard Horowitz, director of the Holocaust Survivor Assistance Program at the Jewish Family Services. “The current situation brings that second layer to the surface with flashbacks and fears.”

One survivor who was hidden on a farm during the Holocaust has been badly triggered by not being able to leave her home, Horowitz said. Another has had flashbacks to the war after seeing the shelves of her local supermarket nearly bare and the worried looks on everyone’s faces.

Morris Katz, an 80-year-old survivor who fled to Russia from Romania, said he fears going hungry after nearly starving to death during the Holocaust.

“My doctor told me I’ll die if I go out and get exposed to the virus,” he said. “It reminds me of the war. I’m grateful for the food I’m receiving from Family Services.”

Although Holocaust survivors are understandably worried about COVID-19 and the limitations it’s placing on their lives, they are also lifting up the people helping them.

“They’re resilient. They remind us that we will get through this,” Wernick said. “They tell us we will be forever changed but that we will persevere. They are still our teachers. They know what it means to have love and humanity in the face of adversity.”

The post Amid coronavirus pandemic, Holocaust survivors at special risk — and getting extra help appeared first on Jewish Telegraphic Agency.

Amid coronavirus pandemic, Holocaust survivors at special risk — and getting extra help