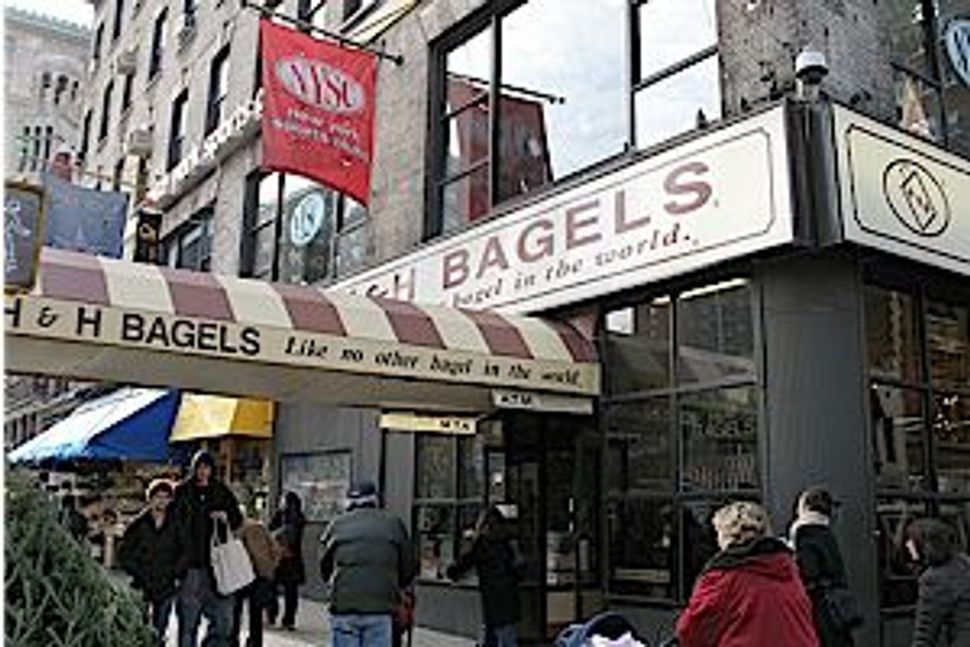 Only H&H’s bagels are for eating hot and plain — crisp on the outside and a little doughy inside. And though this bagel is as essential to Manhattan’s Upper West Side as the beignet is to New Orleans and the croissant to Paris, today is the last day you will ever be able to enjoy one there.

It appears that H&H’s store and bagel plant on 46th Street near the West Side Highway will stay open, though the company has made no formal comment.

But the Midtown location is a good mile from the edge of the Upper West Side, and a hot and plain H&H bagel is best enjoyed on the way out of the store. Barring an idling motorcycle waiting to speed a batch of bagels from 46th Street to 80th Street the moment it falls from the oven, the hot and plain and the Upper West Side will be forever parted.

For a child of the neighborhood, that’s a tragedy. I was more or less teethed on H&H bagels. I’ve spent cumulative days waiting in line on H&H’s sawdust-covered floor, watching bakers fill the Plexiglas bagel boxes and strategizing to pick the freshest variety. I’ve gasped as the price has climbed from 90 cents to a staggering $1.40 for a single bagel, then gone ahead and bought a bag anyway.

Not everyone loves the taste of H&H. A 1996 round up of Manhattan bagels in New York magazine suggests that the store’s owner, Helmer Toro, may overload his secret recipe with sugar, noting that a hot H&H bagel “tastes remarkably like a toasted marshmallow.”

That’s not entirely fair, though perhaps not far off. A slightly inferior flavoring doesn’t take away from the experience of eating the hot and plain, however, which is as much about texture and warmth as it is about taste.

Toro started his bagel company in 1972 with Hector Hernandez, his brother-in-law. Besides selling at their New York locations, Toro shipped bread around the world. Their toll-free number, (800) NY-BAGEL, signaled the hubris of their brand positioning, but also the degree to which the H&H bagel came to be seen as the Platonic form of the New York bagel.

That phone number now appears to be disconnected.

Late on a Friday or Saturday, as the ovens were preparing the next day’s deliveries, fresh hot plain bagels were always in ready supply. The store’s location near the 79th Street subway station made it a convenient stop on the way home, even when nothing else was open but Big Nick’s, the 23-hour diner and pizza shop a few blocks away. On cold winter nights, the ovens steamed the store windows. Panhandlers held the front door open, and only the most jaded lifelong New Yorker could ignore them while walking out with a hot bagel in a paper bag.

The store is across the street from Zabar’s, seemingly the most solid of the neighborhood stalwarts. But Broadway between 72nd and 96th Streets is at the tail end of a radical turnover among commercial tenants as retail chains and cell phone outlets and storefront banks have replaced the old local businesses. The block is changed. With H&H gone, it might be changed beyond recognition.