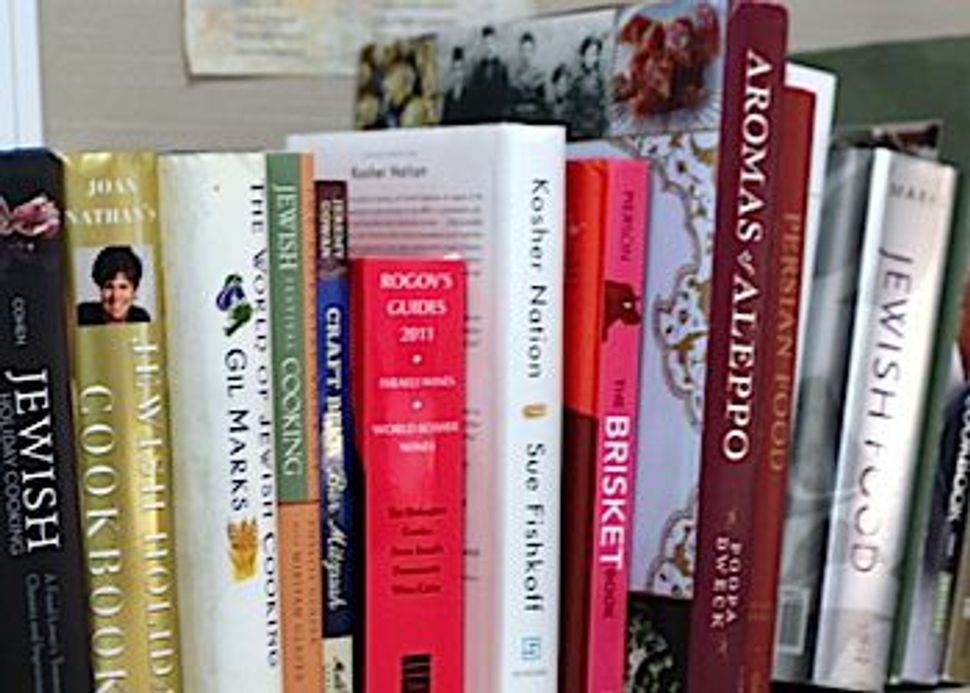 I have often wondered what would happen if I was able to meet the matriarchs and patriarchs of Jewish food in one place. In my mind, I imagine a council of dignified cooks, cookbook authors, culinary historians and restaurant critics, some donning aprons and carrying wooden spoons, others carrying historic Jewish cookbooks, all passionately debating the best Jewish food. In this dream, there’s smorgasbord of global Jewish food.

In reality, when five of the major thinkers in Jewish food gathered to speak at the Roger Smith Hotel Cookbook Conference’s panel “Eat and Be Satisfied: Jewish Cookbooks, Past Present and Future” last Friday the situation wasn’t terribly different from what I had imagined — minus the smorgasbord and aprons. Cookbook authors Gil Marks and Joan Nathan were joined by historian Jenna Weissman Joselit and James Beard Foundation VP, Mitchell Davis for a series of mini-lectures moderated by food historian and writer Cara De Silva.

The heated debate about Jewish food and its origins was as lively as I had dreamed. Each talk focused on Jewish cookbooks in one way or another and while the topics ranged from Nathan’s lecture on French Jewish cuisine to a discussion of recipe contests in the 1920’s and ‘30’s given by Weissman Joselit, each of the speakers came back to the same key point: Cookbooks are not simply for cooking. “Cookbooks are cultural artifacts… They’re a reflection of a moment in time more than a manual,” as Davis put it.

“A good cookbook tells a story,” explained Marks. Using the editions of the “Settlement Cookbook”, as an example, he traced a movement of early 20th century Jewish immigrants away from culinary and religious isolation towards assimilation. Historic French Jewish cookbooks and recipes show a movement of Jews from Alsace westward into France, Nathan noted. More than 20 cookbooks were named during the conversation, each one illuminating a fragment of Jewish culinary thought as well as larger Jewish cultural currents that existed when they were published.

In my dreams, I’m permitted to ask this council of Jewish culinary experts a single question. So here it was: What culinary moment will contemporary Jewish cookbooks (and those in the coming years) capture? The question is nearly impossible to answer, as more and more people “return to the kitchen,” and as a wider variety of more Jewish restaurants — like the Bay Area’s Kitchen Table, New York’s Kutsher’s and D.C.’s Sixth and Rye — open, all representing different voices in the culinary scene. But the experts didn’t disappoint.

The books will display “a playfulness and irreverence,” similar to the approach to food at the new Kutsher’s, said Weissman Joselit. Nathan interjected that they will also capture a search for authentic flavors, pointing to chefs who are traveling the globe in search of the roots of Jewish dishes. There’s a “search for novelty and authenticity at the same time,” Weissman Joselit told me after the event. For many Jewish chefs and cooks, we are caught between these two ideas — wanting to preserve authentic flavor, but hoping to have some fun with it by making it our own too.