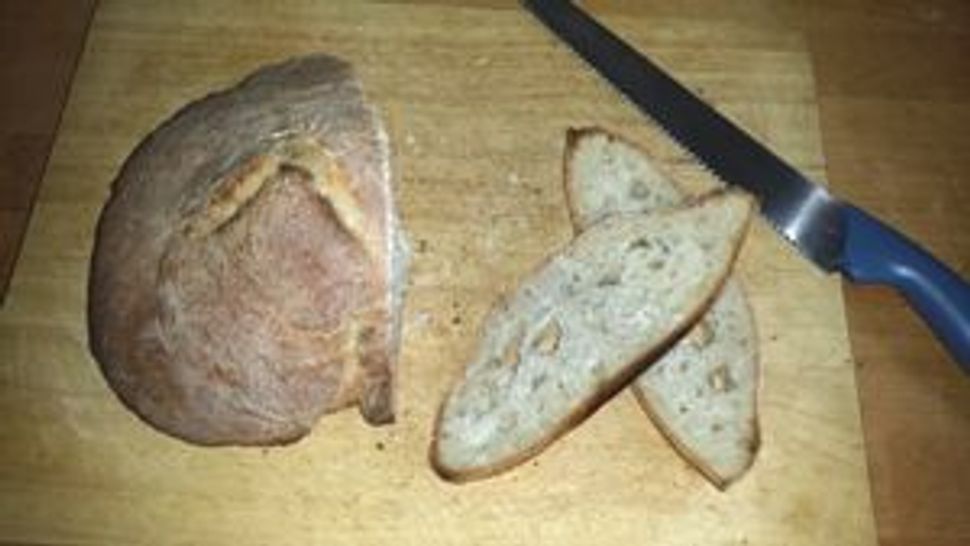 My new year’s resolution was not to eat bread that I didn’t make. Between December 31st and January 1st, this already proved too difficult, so I scaled it back to not purchasing bread. In other words, if I wanted bread, I’d have to make it.

I’ve already mastered my classic challah recipe (which is actually not classic because it’s vegan). What used to take me hours and hours of anxious waiting and careful kneading, I have now turned into a quick and easy Thursday night dough making, and a pre-Shabbat braiding that takes less than an hour including 30 minutes in the oven. And every time, people can’t believe that I actually made my own bread.

With a solid challah recipe under my belt, I set out for my next challenge and got my heart set on making sourdough. When I get my heart set on something, I don’t give up easily (just ask my mom about the teddy bear she didn’t buy me when I was two), I will continue to work on it until I’ve perfected it. Maybe it’s because I’m an eldest child.

For those who are unfamiliar, sourdough is simultaneously the easiest and most plebian bread and also the fanciest and most complex. In order to make the bread you need to make or obtain a sourdough starter – a simple mix of equal parts flour and water, allowed to ferment for a few days a room temperature capturing the natural yeasts in the air. A new starter needs to be fed daily, while a mature starter needs only to be fed once a week or so. I was ecstatic when a friend of a friend brought me some of her starter.

I started by purchasing the book she recommended to me, The Bread Bakers Apprentice, which is filled with gorgeous, glossy pictures of crusty-on-the-outside, airy-on-the-inside breads that will undeniably make you think “I cannot do this” and put it back on the shelf. Fatefully, I accidentally shipped the book to my parent’s house and was eager to try my hand at the bread before they could ship it back to me.

So I started the same way I start most other recipes I’ve never tried before, by reading a bunch of recipes, deducing the most necessary and cheapest ingredients, and hoping for the best. But with sourdough there are already only 3 ingredients already (flour, water, and salt), so I moved onto phase 2 of my research: watching bread-baking Youtube videos. There are a surprising number of internet videos about making sourdough, none of which I found particularly helpful – mostly because they all claim how easy it is to make sourdough and how hard it is to mess up. Of course, this only made me feel even more strongly that not only would I create dense, mushy bread, but that I would probably also burn my apartment down too. Feeling defeated, I fed my starter and left it out to see just how close I could come to doing the so-called impossible (killing the starter).

When I came back in the morning, I couldn’t believe what I saw: a bubbly, pasty, gooey mixture that was literally growing inside the container! It smelled tangy and sour, just like a freshly baked loaf would (note: don’t let this fool you, it doesn’t taste good). I scooped out a bit of the fed starter and put the rest back in the fridge. I added more flour and water to the starter, which after the additions is now called a barm – and hit the books again to see exactly how long I had to wait. Here was my first, and maybe my only mistake; contrary to popular belief, baking is not exact. This is particularly true with “slow breads”, the longer you leave them out, the more time they have to develop rich, complex flavors.

If you are a type-A personality like me, I highly recommend taking up baking sourdough as a hobby precisely because you cannot follow a single recipe. The variables brought out by humidity and temperature and air quality are so significant in the process, that it seems almost crazy to think you could have a recipe in the first place. You also don’t need a bread hook or a bread maker or a temperature controlled proofing box or even a banneton (thought this will probably make the final product look really pretty). I kneaded the dough until it felt ready, what was once sticky like paste had become smooth and soft. I let the bread rise in accordance with my schedule, rather than spending my nights and weekends waiting around for it (consequently, this also seems like good dating advice) Using my hands, a bowl, and a baking sheet I made 2 amazing loaves of bread. When the loaves came out, steaming from the oven I felt in a way like a parent. The process is absolutely amazing and mind-boggling; you take basically nothing, a little flour and water, give it time to rest and develop, and you create a miraculous product. Something from nothing, almost.

Liz Traison is a Program Associate at Hazon and a health coach through the Institute for Integrative Nutrition. She is a graduate of The University of Michigan where she received a BA in History and Judaic Studies. She also studied at Midreshet Lindenbaum and Hebrew University. She is thrilled to be a member of the 2014 PresenTense fellowship. She likes being outside, particularly on Skeleton Lake. And also being inside, specifically doing creative workshops in prison.