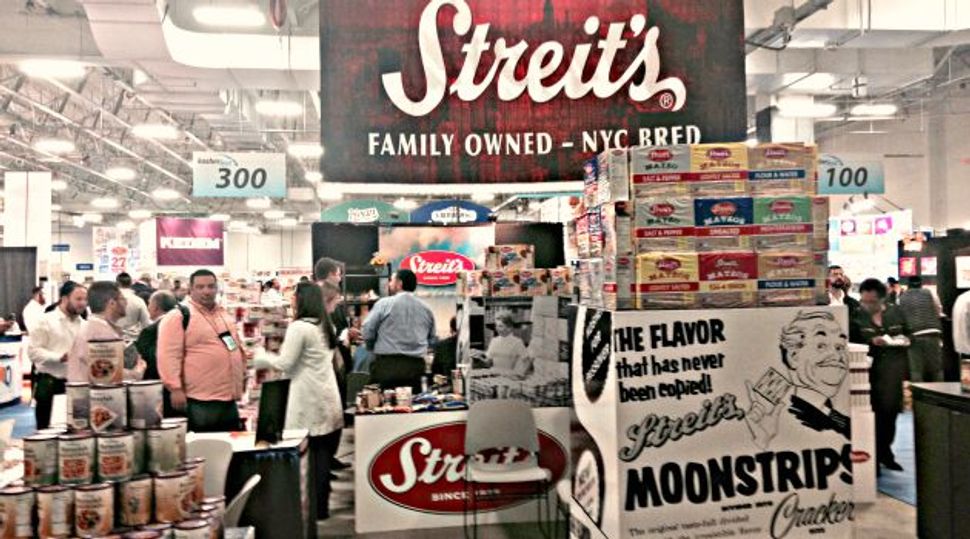 Inside Kosherfest 2014. Photograph by Liza Schoenfein

The first food that jumped out at me yesterday when I walked into the vast Meadowlands Exposition Center in Secaucus, New Jersey, for Kosherfest 2014 was the gluten-free granola. The latest offering from Foodman’s Original Matzolah, the cranberry-and-orange flavored product is wheat- and nut-free. Its prominent placement (Matzolah is distributed by Streit’s, whose matzo is a key ingredient) heralded what seemed to me to be the trend of the show: foods that not only follow the laws of kashrut but also specifically address other dietary restrictions, whether they involve gluten intolerance, veganism, or avoidance of dairy.

Among the gluten-free highlights at Kosherfest — the largest business-to-business trade show for the kosher industry — were new matzo ball mixes from Streit’s and the Manischewitcz Company, which also offered a gluten-free brownie mix.

I sampled some really good kale-based veggie burgers from Dr. Praeger’s filled with a mixture of vegetables, grains, and roasted garlic. The patties were being seared on two cooktops at the Dr. Praeger’s booth, giving off quite the enticing aroma. (I must admit that I doubled back for a second taste.)

I was impressed with a series of gluten-free flour blends from Orly the Baker. Each of five blends is optimized for use in different types of baking — one is best for breads, another for cookies, another for cakes and muffins and so on.

Our intrepid food intern, Hadas Margulies, came with me to the show, and was delighted to find all sorts of vegan offerings.

Personally, I was skeptical of the vegan, gluten-free seafood from Sophie’s Kitchen — I don’t tend to like ersatz anything. But the enthusiastic Alan Linder explained that the products were entirely plant-based, with no GMOs, preservatives, or added sugar, and that because they’re not made with soy, but with something called elephant yam root, the texture is firm, not mushy. The fried “shrimp,” coated in a crispy, gluten-free batter, was surprisingly toothsome and flavorful. The vegan “crab” cake I tried was pleasant enough — it didn’t taste fake or feel rubbery, like so much imitation crab, though I thought it might be improved by a crunchy coating.

Hadas was thrilled to find ravioli stuffed with a vegan ricotta cheese substitute at the Tofutti booth. “I can’t remember the last time I had ravioli,” she said, happily digging into the steaming little plate.

Even a number of wines were designated as vegan. (Without getting deeply into it, animal products such as milk proteins, gelatin, and egg whites are sometimes used as a fining agent to clarify wine during the wine-making process.) Looking for a few bottles that would go well with a turkey or a Hannukah brisket, I tasted some very nice vegan reds — my favorite, from Yarden, was a blend of two portugese grapes, Touriga Nacionale and Tinta Cao, called 2T.

Toward the end of our visit I tasted something that I hope becomes a trend: wild smoked salmon. This one was cold-smoked wild Alaskan salmon from Tilgner’s, a family business whose plant is located on the shores of Cook Inlet in Ninilchik, Alaska. The salmon was deeply flavorful, and tasting it made me wonder why, with what we know about the perils of farming salmon, there wasn’t more of a demand for the wild stuff.

But in case you think that Kosherfest’s gone completely health crazy, I’ll assure you that there were plenty of good old pastries and cakes, fabulous sausages (a new beef merguez from Jack’s Gourmet Kosher was out of this world), and a whole lot of booze, including a new silver tequila called Baron, whose booth, as you might imagine, gathered quite the crowd. (Visiting their website just now, I noticed that even they tout themselves as being gluten free.)

Hadas and I had the great pleasure of sampling this tequila at another booth, that of Burning Bush Hot Sauce, when the company’s gregarious “president and chief saucerer” Neil Wernick walked us through four stages of hot-sauce tasting, one being Baron tequila doused with Burning Bush. There’s way more to tell you about this vendor, but I’ll leave that to Hadas and another post.

I’ll end with a product that is most decidedly neither vegan nor gluten free: Dufour Pastry Kitchens was a first-time exhibitor at Kosherfest this year, having received kosher certification in June. I’ve used this frozen all-butter puff pastry dough to make flaky mushroom tarts, and I was happy to meet and chat with the co-owners of this woman-owned small business, Judi Arnold and Carla Krasner.

As Hadas and I trudged toward the exit after three and a half hours of nibbling (if not noshing), we wondered aloud how much we had consumed — it was all tiny bites, after all — and consoled ourselves with the notion that our wine was vegan, our ravioli dairy free, and our fried shrimp and burgers devoid of even a drop of gluten.