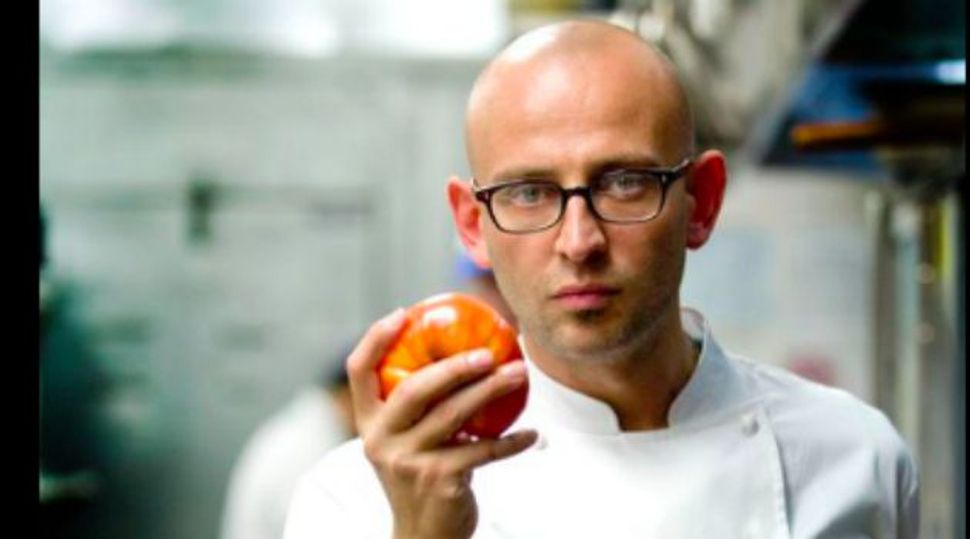 Los Angeles-based kosher-cuisine wizard and Top Chef survivor [Alex Reznik][2] is returning to his hometown with a new Glatt kosher restaurant, Eater reports. Reznik, who runs the well-reviewed Ditmas Kitchen & Cocktail in L.A.’s Jewishy Pico-Robertson area, will launch Bedford Kitchen & Wine Bar in Queens, New York, “in a few weeks.” Eater’s Los Angeles blog reports the chef will come out as bicoastal, juggling kitchen duties at both spots. And keeping with Reznik’s theme of “restaurants with Brooklyn-y names that aren’t actually in Brooklyn, Bedford Kitchen will open in a Jewish pocket of Flushing near Queen’s College,” Eater says…

…Brooklyn-based chef Ilan Hall, on the other hand, can save on airfare back to L.A. — for now. The Knife Fight star told the Forward he’s actively seeking a new home for The Gorbals, the recently shuttered downtown Los Angeles hotspot where he pioneered bacon-wrapped matzo balls, among other treyf treats. “We decided to move The Gorbals in L.A. and closed the original location this past December to look for new a space,” Hall said. “The new location will also be downtown, but it’s going to have a pretty different menu. We’re in the process of testing recipes, and we’re hopeful that the new space will open later this year.” Hall continues to wow diners at his Brooklyn branch of The Gorbals, which opened last year…

…In April, Chez Panisse alum and California-cuisine legend Jonathan Waxman will open a reincarnation of JAMS, his renowned 1980s Upper East Side restaurant whose “West Coast style was something new: a fresh, produce-driven approach that presaged the farm-to-table movement,” according to The New York Times. Waxman owns Barbuto in Manhattan’s West Village and had consulted for Mexican chain Rosa Mexicano. “OK, I love bacon (and yeah, I’m from a Jewish household),” Waxman wrote in A Great American Cook, his modestly titled 2007 cookbook.

…Meatball Shop co-owner and “resident hottie” Michael Chernow will open a new “sustainable seafood” restaurant called Seamore’s in Manhattan’s Little Italy, Eater reports. Chernow’s “hooked up with local fisheries in Montauk for ‘under-utilized, wild, local, and less branded species of fish’ — like skate, monkfish, squid, porgy, dogfish, fluke, and flounder,” according to Grub Street. When NYC’s Meatball Shop chain debuted in 2012, Chernow told told Serious Eats: “I’m a Jew from New York. And, like, half a Jew really because I’m a Jew by culture and by association, not by religion.”

…Breaking news from Details magazine, whose March issue reports on — wait for it! — the “Israeli food boom” led by places like Philadelphia’s (Zahav](http://www.zahavrestaurant.com), L.A.’s Madcapra, and NYC’s [Bar Bolonat][14].

…Potluck Video, whose reports on food and drink air online and on NYC cable channels, went inside the soon-to-be-defunct Streit’s matzo factory on Manhattan’s Lower East Side. “After 90 years, their history is incredible. So before they leave the old equipment behind, we went to see how matzo is made in the old-fashioned way,” the site says. With Passover not too far off, the video report might make you get misty.

…Morris Cohen, who founded “Lower East Side institution” Economy Candy 70 years ago, has died at 97, the New York Daily News reports. The Rivington Street confectionary empire “started as a shoe store with candy hawked from a pushcart outside. Shoe sales plummeted during the Depression, so candy became the Cohen family moneymaker,” the News said. His son Mitchell continues to run the business.

[14]: http://www.barbolonatny.com]and Mile End Deli [http://www.mileenddeli.com]. Israeli food has always gone “beyond hummus,” the magazine says, noting that high-end Hebraic chefs are “elevating the classics, fetishizing falafel… in the same way others have the burger, the taco, and the pizza.” Next, we predict the magazine will “discover” [nouveau deli](https://forward.com/food/202655/nouveau-jewish-food-hits-streets-of-manhattan/?#ixzz38KEuYizM