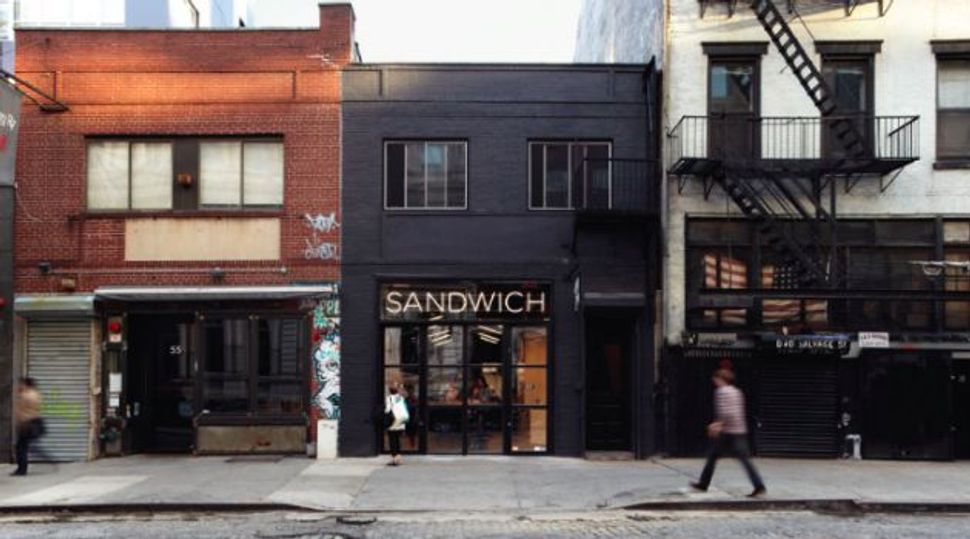 It seems like every restaurant in the Big Apple is hosting a Seder-style meal this Passover, but two stand out. Mile End, the always-fabulous Montreal-inspired deli, will host “a casual Seder with the core blessings and the four questions, followed by dinner with wine pairings.” On the $125-per-person menu: chopped liver with house-made pickles; matzo ball soup with smoked chicken, leeks, asparagus and garlic schmaltz; Gefilteria gefilte fish with fennel, radish, chrain, and dill; bitter greens and soft egg with spring vegetables and pickled ramp vinaigrette; and smoked lamb shoulder with merguez, tsimmis and rhubarb charoset.

“The inspiration for the dinner is the Seder plate itself,” owner Noah Bernamoff told the Forward. “There is also an element of decadence to the meal along with its wine pairings that speaks to the notion of relaxation and luxury: We recline at the Seder and speak of the exodus from Egypt as a way to exhibit our relative comfort and the generations that have sacrificed to bring the Jewish people from slavery to freedom.”

Mexican-Jewish chef Julian Medina of Toloache is adding Jewish accents to his menu for the Passover week. Photograph courtesy of Toloache.

….Meanwhile, 2015 is becoming a banner year for aficionados of Passover wines — we know you’re out there. Winemakers are introducing a record 100 kosher-for-Passover varieties this year, according to KosherToday. “A growing trend in kosher wines is the increased presence of the small family wineries,” KosherToday said. Renowned vintners Shimon and Liora Welner, whose Welner Wines produces in seven countries, have added prosecco and moscato to their roster; longtime kosher purveyor Kedem has unveiled a raft of new labels, including Or Haganuz Har Gelili White Dessert Wine ’13 from Israel; Zakon Unoaked Cabernet Sauvignon ’12 from California; Goose Bay Blanc de Pinot Noir ’13 from New Zealand; and Ovadia Montepulciano d’Abruzzo 2014 from Italy.

….Cancel the shiva for Full Belly Deli, the only Jewish deli in Portland, Maine. A Facebook page is touting the deli’s imminent reincarnation at an as-yet undisclosed Portland location. “We will give you the best deli experience north of Katz’s,” the page crows. As The Weekly Dish reported last month, deli owner David Rosen blamed high rents for Full Belly Deli’s demise after more than 50 years.

….A venerable Chicago luxury hotel is going kosher. The Fairmont Chicago, Millennium Park has opened a dedicated kosher kitchen under the supervision of the Chicago Rabbinical Council, according to Crain’s Chicago Business. The new operation targets “Chicago’s growing Jewish community, which expanded about 8 percent to 291,800 between 2000 and 2010, according to a study commissioned by the Jewish United Fund and Jewish Federation of Metropolitan Chicago,” Crain’s says. The hotel’s already booked seven kosher events.

….Look for a hipster-kosher food truck at this year’s South by Southwest music and culture festival in Austin, on through March 21. Caracas-born chef Deborah Benaim is serving up her version of “street food”, Chabad.org reports: Latin-Jewish-inspired fare “eaten out of hand…. it’s fun, it’s playful, and it’s refined in its own way.” Her menu includes Venezuelan-style arepas, yucca fries or fried plantains and sweet drinks like limeade. A highlight: Benaim’s barbecued-beef arepa, an “ode to Austin,” the state’s capital.

…Langer’s Deli in Los Angeles has once again made LA Weekly’s annual roster of 99 Essential Restaurants. The deli was opened in 1936 by Harry and Rose Langer, immigrants from Odessa, and sons Al and Joe; grandson Norm still runs it. “Langer’s will never change, or at least we hope with the fiercest of hopes that it will never change, writes LA Weekly’s Besha Rodell.

…Sarge’s Deli — dubbed the “Jewish Phoenix” of delis for its revival after a devastating 2012 fire — gets a loving shout-out from deli maven Noah Arenstein in the Chopsticks and Marrow blog. “The ‘Souper Soup,’ now $9.95, is still the single best, most comforting chicken soup in town,” Arenstein writes. “I don’t make these bold pronouncements lightly.”