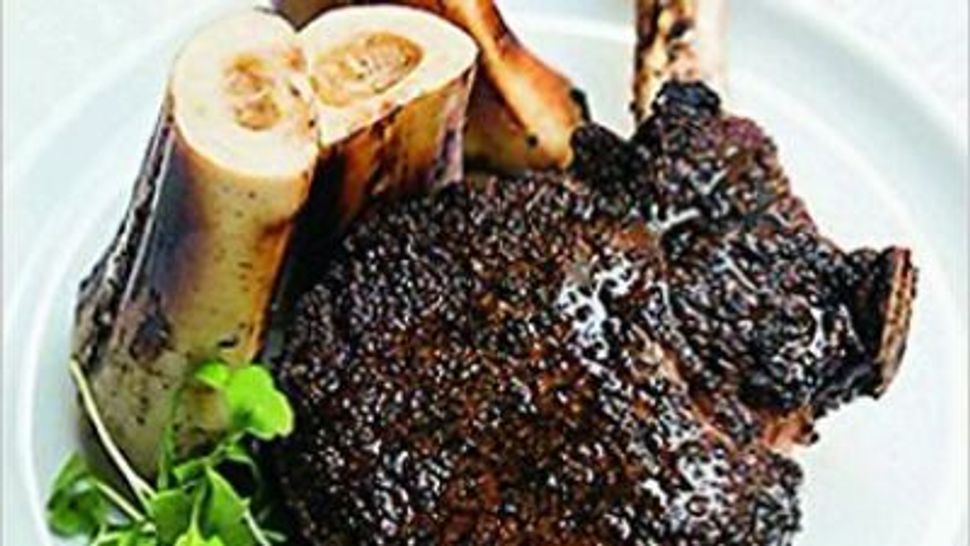 A top kosher steakhouse is sharing its secrets in a new cookbook. Image by Martim Meirelles

This is an occasional column in which the writer evaluates a new cookbook by making some of its recipes, sharing the dishes with friends and asking her guests what they think of the results. She recently cooked her way through “Le Marais: A Rare Steakhouse…Well Done” by Mark Hennessey and Jose Meirelles (Gefen Publishing House).

Jose Meirelles, the owner of Manhattan kosher steakhouse Le Marais, is a typical “New York story,” according to former Senator Joseph Lieberman and his wife, Hadassah. In the foreword to “Le Marais: A Rare Steakhouse…Well Done” they ask, “Where else would a non-Jewish Portugese immigrant open a French bistro, hire an Irish-Catholic as its executive chef, and create one of the finest and most successful kosher restaurants in the United States?”

That story is well known to New York’s kosher diners, because for the last two decades Le Marais has helped set the standard for kosher restaurants. As greatkosherrestaurants.com says, “Without sounding over the top, Le Marais is simply one of the best kosher steakhouses in the country.”

“We now live in an unprecedented golden age of kosher restaurants, which Le Marais helped bring about,” the Liebermans conclude.

But how did Le Marais come about?

As the introduction, written by chef Mark Hennessey, describes, Meirelles was already doing great business at another French brasserie, Les Halles, with his then business partner Philippe Lajaunie, when Lajaunie was asked by some lawyers he had hired if he would consider opening a similar restaurant, but making it kosher. When Lajunie took the idea to Meirelles, Meirelles balked. The thought of running a French restaurant without using cheese and butter — not to mention pork or shellfish — was unthinkable. To be closed on Friday and sometimes Saturday night? Crazy talk.

The lawyers used their powers of persuasion, saying that if the pair were willing to attempt this new venture, the funding would be there for it. That is how the restaurant came to be.

Le Marais quickly became known for its dry-aged steaks and for having an in-house butcher shop, from which diners could take home things like house-made sausage, rillettes and pates, and the restaurant’s signature bacon (made from veal, which appears often in its recipes).

And with this book, the restaurant is offering an instruction manual. The new cookbook makes quite an impression. While it’s not a hardcover, and its pages are matte rather than glossy, it features many beautiful photos (not for every recipe, but for many) taken by Martim Meirelles, Jose’s son.

For anyone interested in learning kosher versions of classic French techniques — making the mother sauces, for example — this is a great resource.

While steak is the main attraction at the restaurant — and it is in the cookbook as well — other sections should not be overlooked. There are plenty of recipes for other proteins (fish, chicken, lamb), with corresponding salads, sides and desserts.

For our tasting dinner, I invited Marc Smolowitz, director and producer of a documentary I am working on, “The Lonely Child,” and his husband Yves, because I hadn’t met Yves yet — nor had Marc met my husband. I also figured one should not squander an opportunity to have a Frenchman at the table when evaluating a book of French recipes.

We began with parsnip and apple soup. I chose it mostly because it seemed to make a good contrast with the showstopper of the next course (stay tuned), and because I couldn’t remember having tried something like it before. It’s a pretty basic recipe, with parsnips and Granny Smith apples simmered in chicken stock and white wine.

My only gripe with the soup was that it looked like puréed mashed potatoes (read: not all that appetizing) and the authors offer no suggested garnishes. We sprinkled chopped parsley and black salt on top to “pretty up” the bowls, and I offered pumpkin seeds toasted with a bit of coriander — a spice in the soup — to lend a crunchy element. (We let our guests put them on their soup tableside, so they could first evaluate the soup on its own.)

Despite its lackluster appearance, we all loved the soup. My husband, Paulie, immediately noticed how the Granny Smiths created a tart element, as would vinegar or another acid. “It was a smart use of produce to make it brighter,” he said.

Yves raved about the density, while Marc said it was almost “porridge-like.”

Yves said that he thought parsnips as an ingredient could be “kind of awkward,” but that this soup was an excellent use of them. We all gave the recipe a major two thumbs up. The recipe yielded 12 portions, which would have been too much for our party of four, but it was easy to halve. 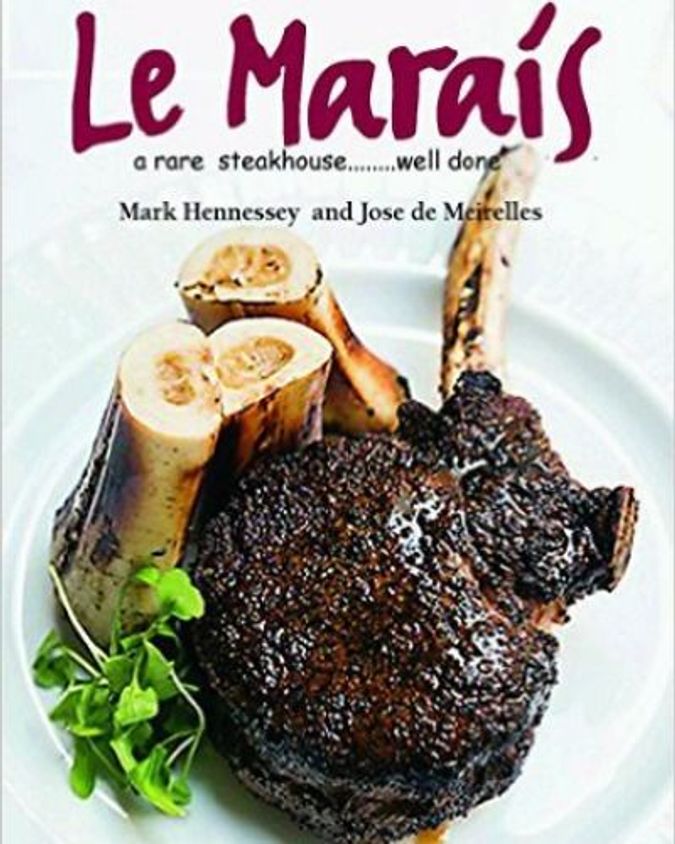 I chose an occasion-worthy main course: braised lamb shanks. I had never made them before. The recipe yielded eight portions, so I halved that, too. I don’t own the 14” X 17” braising dish the recipe calls for, and I wondered how, even if I did, eight lamb shanks would fit into it — my four just fit in one layer in a roasting pan that size.

The lamb shanks are browned and then slow cooked in the oven for three hours, similar to the technique used to make brisket. The braising liquid consists mostly of red wine, with some aromatics and spices and some dried fruit added near the end. (By the way, the soup, side and main course recipes for this dinner required two full bottles of wine —and that doesn’t count what we drank!)

I took the chef’s recommendation and served the lamb on a bed of fluffy polenta, which was perfect for soaking up the sauce.

While the lamb did get tender enough in the three and half hours allotted, it wasn’t quite falling off the bone. None of us found fault with the recipe and we felt that braised meat is just the thing on a cold winter’s night — to a carnivore, of course.

Because I had some fennel from my CSA box in the house, I made a fennel, apples and onions side, in which the ingredients are braised in white wine with thyme. Again, the Granny Smith adds a nice bit of tartness, and again, this dish was a bit too white for my liking. While we thought it made a nice complement to the lamb, it didn’t blow us away.

I chose a pistachio and olive-oil cake with citrus sabayon and candied pistachios, which called to me mostly because I wanted to avoid margarine, and because the California olive-oil harvest had just happened and I had been given some excellent bottles. This cake would be just the thing to showcase some of it.

My sabayon (egg yolks whisked with sugar and liqueur) didn’t quite set up properly, and we thought the required full cup of orange liqueur might be to blame. Indeed we found the sabayon a bit too boozy for us. But even despite these issues, we thought the dessert was fantastic.

The cake, in which ground pistachios are added to the flour, was simple, which allowed the intense olive-oil flavor and citrus zest to shine through. (The authors do not say this, but I do: Don’t skimp and use cheap olive oil; your cake will suffer for it.)

With the sabayon and candied pistachios sprinkled on top, this is a stunner of a cake. (Note: I added a pinch of salt to the candied pistachios, finding them too one-note with just the sugar, and I suggest you do, too.)

I did notice a small editing error in that the sabayon recipe called for citrus zest in the list of ingredients, but the instructions never said when to add it. My guess was to add it after the sauce was heated.

I didn’t love the index to this book — it has a problem I’ve encountered with other cookbooks too. I had to flip back and forth a number of times to make several recipes for the same meal, and the fact that the dishes weren’t indexed by ingredient — there was no entry for fennel or pistachios, for example — meant I had to look under the “sides” or “dessert” listings and skim down until I found the desired recipe. This made things harder than they needed to be.

That aside, “Le Marais” will please the most discriminating kosher cooks and diners — and non-kosher ones, too — provided, of course, that they are carnivores.