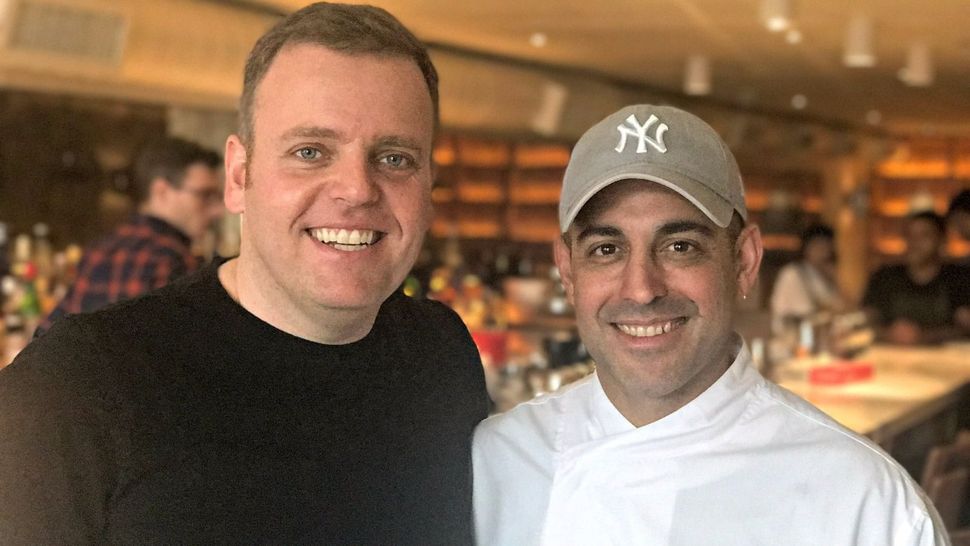 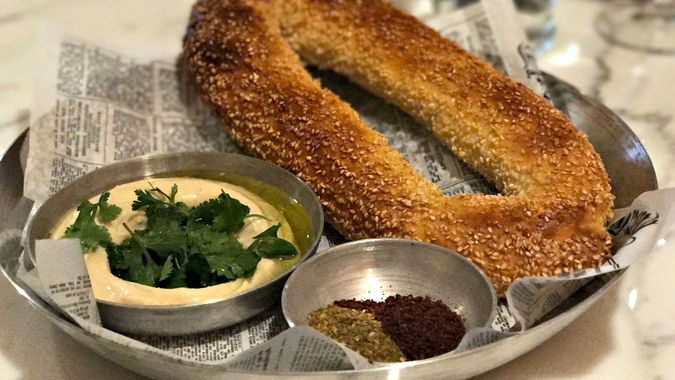 But hummus it was not. For his first New York restaurant, which he opened April 28 with Breads Bakery co-owner Gadi Peleg, Israel’s most celebrated chef is steering clear of Israeli-food stereotypes, defining his cuisine instead as modern Middle Eastern. There is no falafel on the menu, and no hummus either. The little dish of creamy goodness that accompanied the “Jerusalem Sesame Bagel” was called lima bean messbaha, and it was fresh and unexpected, scattered with chopped herbs and paired with a tiny bowl of sumac and za’atar.

Adoni’s aim with Nur is to incorporate the flavors of the entire region, broadening diners’ understanding of Middle Eastern food while attempting to bridge cultural boundaries.

The bread service alone represents a variety of countries and cultures. The restaurant’s breads — there are currently four on the menu — are made at Breads Bakery, exclusively for Nur. In addition to the large “bagel” there is a Yemenite kubbaneh, a honey-and-garlic challah, and a sourdough, served with a paprika-and-garlic aioli and whipped salted butter.

“Bread is really such an integral part of the cuisine,” said Peleg, while making a dipping gesture with his hand above the fava spread. “It’s all designed for that. It’s designed to rip apart and dip into all those spices.”

Like most things on the menu, it’s also designed for sharing: Rather than putting “entrees” on the menu, the larger plates appear under the heading “Dishes to Share.”

One of these is called “Palestinian Tartar” and Adoni serves it at his Tel Aviv restaurants, too. It’s a magnificent dish of seasoned raw beef scattered with fresh peas, fava beans, thin rounds of hot green chili pepper and red onion, with little mounds of crushed fresh tomato and herbs set amid swirls of tahini and an inky black cream of smoky charred eggplant skin. The dish is named to honor the Palestinians who work in Adoni’s kitchens in Tel Aviv at Catit, Blue Sky, Mizlala and Lumina.

Among Nur’s small-plate offerings is a savory, sour, sweet and spicy pair of what the menu calls “doughnuts” made with a mixture of Medjool date, smoked trout and almonds, scented with keffir lime leaves and served with a little dish of curry-citrus vinaigrette.

“It’s an example of how we do a modern Middle Eastern,” Adoni said. “Spices that might not exist in the Middle East, like lemongrass or curry leaves, I mix it inside this food, creating something different, something more refreshing.”

“That’s my favorite bite,” Peleg said. “It explains the chef’s story in one bite.”

Another big part of the concept is to take street food of the Middle East and elevate it to fine dining, according to Peleg and Adoni. One example is a dish of lamb kebabs grilled within pita bread. The dish, called Horias From The Alleys Of Nablus, incorporates familiar and exotic components.

“I like to combine a lot of flavors, but harmonically,” Adoni said.

Harmony can also be found in the restaurant’s name itself. Nur is a word that exists in both Herbrew and Arabic.

“It’s a word that bridges a lot of these cultures,” Peleg said, acknowledging that it doesn’t hurt that the word is easily pronounceable in English. Nur means light, or flame. The restaurant, though small, has an airy, light feel, and the space, designed by the Nema Workshop, is layered with a variety of textures — rough painted-wood ceiling, smooth blonde-wood chairs, soft leather banquettes, cool marble tabletops, matte tile floors — that together give off a subtle glow that, not unintentionally, put me in mind of Jerusalem. 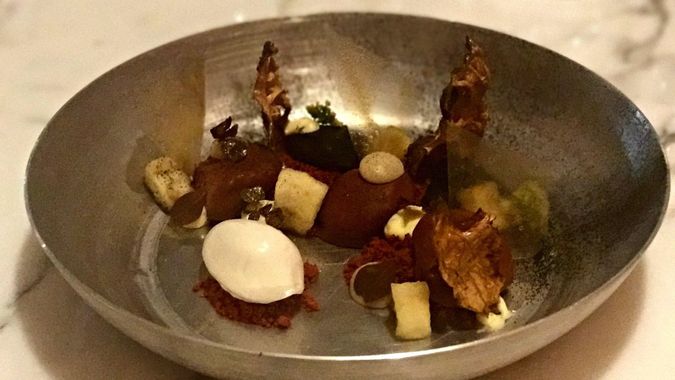 Hills of Jerusalem: ‘Rocks’ of cardamom-scented chocolate, some filled with halva, rest atop pistachio cream. Paired with smoked yogurt ice cream and crisp Jerusalem artichoke leaves, the plate is meant to invoke the the city’s hills. Image by Liza Schoenfein

Speaking of Jerusalem, the city’s hills are invoked in a dessert set before me by pastry chef Lisa Meisenger. Called “Hills of Jerusalem,” the dish consists of “rocks” of cardamom-scented dark and milk chocolate, some filled with halva, all resting atop pistachio cream and paired with a smoked yogurt ice cream and crisp Jerusalem artichoke leaves. It was highly conceptual, and deeply delicious.

That might be an apt description for the restaurant itself. New Yorkers may never look at Middle Eastern food the same way again.

“For me it’s really exciting,” said Peleg. “How often do you get to bring something new to New York?”