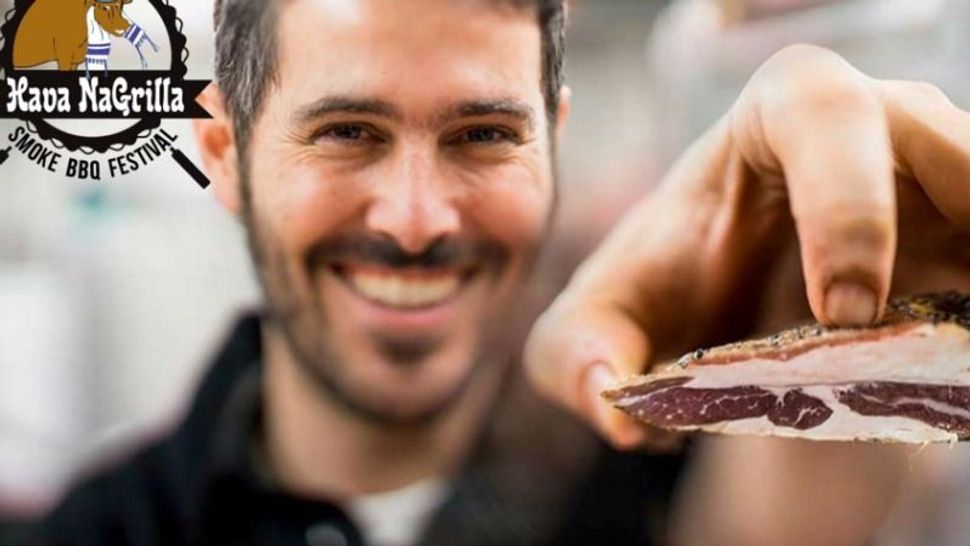 New York BBQ King Ari White of Wandering Cue will be serving his smoked meats for lunch and dinner at the festival. Image by Courtesy of Hava Nagrilla Smoke BBQ Festival

Song and dance are only a fraction of the fun to be had at Hava Nagrilla Smoke BBQ Festival, the smokin’ hot event taking place this Sunday, August 27, in Philadelphia. The first kosher barbecue competition in the area to be sanctioned by the estimable Kansas City Barbecue Society, the event is hosted by the men’s club of Temple Beth Hillel-Beth El to raise money for Philadelphia food banks.

“This is going to be the biggest Jewish event in Philadelphia in many, many years,” said Dr. Stuart (“Stu”) Gordon, who founded and organized the festival.

Indeed, the numbers are impressive: 2,500 people have already pre-paid to attend; there are 120 volunteers coming from various synagogues in the greater Philadelphia area; 35 vendors; 20 barbecue teams of four people each; and 300 pickles donated by The Pickle Guys for a pickle-eating contest.

The 2016 New York Brisket King, Ari White of The Wandering Cue, will be on hand to serve his award-winning barbecued meats (for purchase) for lunch and dinner. Star chefs including Alon Shaya of New Orleans’ Shaya restaurant and Yehuda Sichel of Philly’s Abe Fisher (part of the CookNSolo restaurant group that includes Zahav) are among the judges of the kosher barbecue competition. Teams are traveling from across the country to participate, and the winner will be given the Walter Hofman Award for best barbecue. Hofman, a well known local pathologist and barbecue aficionado, died in 2016. His wife, Ethel Hofman, a food writer for the Philadelphia Inquirer, will be on hand to present the award.

“This is my way to get the Jewish community together, one community; one heart,” said Gordon. “We try to make this a strictly kosher event so the Orthodox among us and the less observant, the Reform, everybody can participate, everyone will be respectful of each other. Everybody can feel comfortable and enjoy the wonderful camaraderie of the event, coming together over barbecue, bourbon and beer.”

“The charity is very important to us,” Gordon said. “We’re raising money and collecting cans of kosher food for the Jewish Federation of Greater Philadelphia food bank. The Mitzvah Project collects food for the five different food banks in Philadelphia and the suburban counties. Regardless of race, creed color, anybody who’s needy can come.”

In addition to the barbecue and pickle-eating competitions, there will be mechanical bull riding, music from bands including Dead Flowers, which will perform a version of Hava Nagila à la Jimi Hendrix’s performance of the Star Spangled Banner at Woodstock. “It’s going to be Jewstock,” Gordon said.

Gabriel Boxer, the “Kosher Guru,” is MC of the event.

Tickets are still available for the Hava Nagrilla Smoke BBQ Festival this Sunday, August 27, from 11 a.m. to 4 p.m. The event will be held on the grounds of the Temple Beth Hillel-Beth El, 1001 Remington Road, Wynnewood, Pennsylvania.