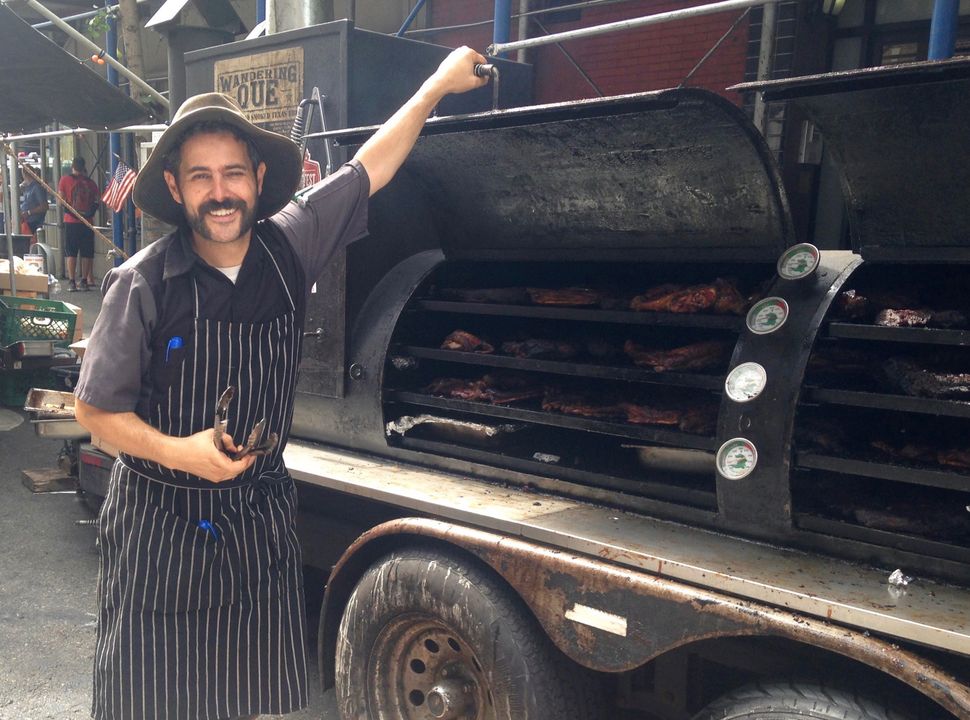 Last year’s Brisket King, Ari White, poses in front of his smoker at a street fair in Manhattan. Image by Lilly Maier

After 18 years in New York, Ari White still calls himself a tourist. So it shouldn’t come as a surprise that his cooking is true to his roots. He was raised in a conservative Jewish family in barbecue-loving El Paso. Combine those two elements of his background and you get Texas kosher barbecue.

Following an uninspired career in finance, White started a kosher catering company in 2004. In 2012, he launched the Wandering Que, a cross between a food truck and a pop-up restaurant. (The name is a play on the negative term “wandering Jew” and the Q from BBQ.)

White’s food — pulled brisket, ribs, turkey legs, tacos and even Vietnamese Banh Mi — is served directly from an 18-foot steel iron pit smoker that he drives to events all over the Tri-State Area.

I recently talked to White in the Lincoln Park Jewish Center, a Modern Orthodox synagogue in Yonkers, New York, that doubles as his catering kitchen. The 37-year-old father of four has a youthful personality, a big grin that never leaves his bearded face for long, and despite being married to a vegetarian, he was voted “Brisket King of New York” in 2016. 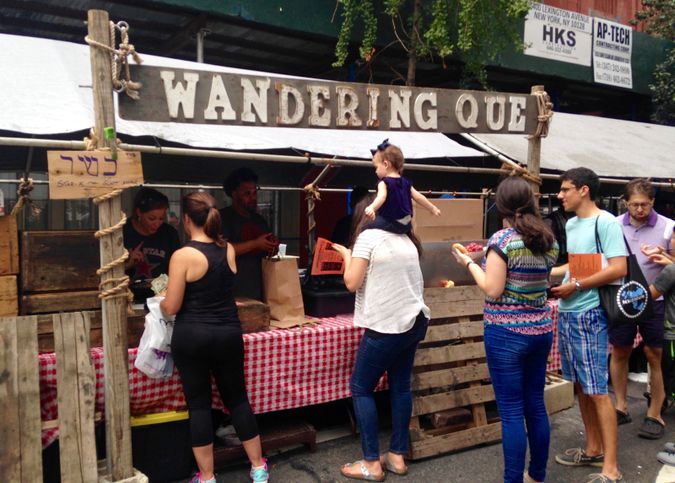 During our hours-long talk, the passionate pit master couldn’t sit still for longer than a minute. Instead he was constantly turning meat, getting wood, advising his Jamaican crew or talking to the mashgiach.

Lilly Maier: Barbeque and kosher, that sounds like an odd combination.

Ari White: It’s funny that you say that. There is an incredible guy in Texas, Daniel Vaughn, the barbecue editor for Texas Monthly, and he was searching for the earliest recorded examples of barbeque brisket. So where did he find it? It was 1910 and not one but two kosher deli butcher shops in my hometown in El Paso, Texas. And why? Because Jews forever have known that brisket and short ribs are amazing for Shabbat. They cook slow for a very long time, which is perfect for Shabbat.

You bring your pit smoker to all your events. Do you actually need it or is it an attraction?

It’s both. This is how we heat so much food at the same time. But yes, it is an attraction, because people are curious to see it.

And then you serve food out of it?

Basically we set up six tables. There is a carving station, there is a guy doing lamb ribs with chimichurri, a guy doing tacos, another one doing sausages. I don’t want to serve just one sandwich; we really build a restaurant out of nothing.

You operate a fire in a crowd. Is it hard to get a permit for this?

Doing business in the city in any capacity is probably a pain in the butt. We have to have tons of permits. I need all my vendor’s licenses, my insurances and everything else. If I wanted to use propane — and I don’t — that requires a whole other world of permits. 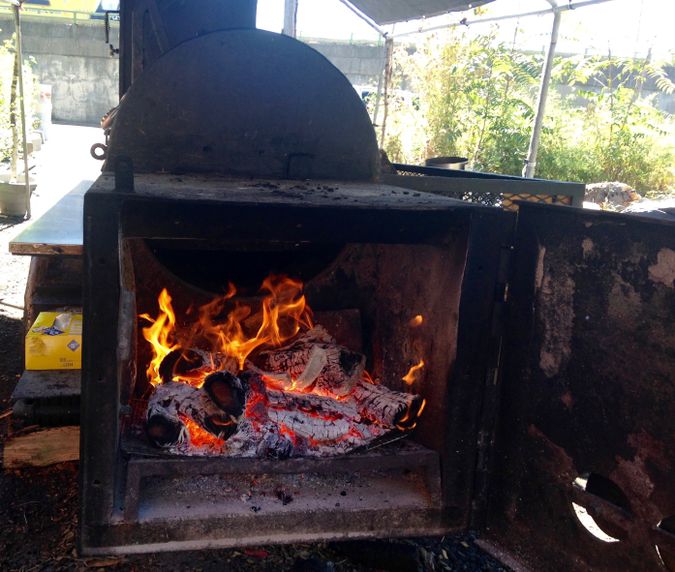 A mashgiach needs to build a fire in Ari White’s smoker every morning. Image by Lilly Maier

You are a certified kosher food operation, so you have to have a mashgiach here at all times. But his job is a little different than in other places, isn’t it?

Well, I can’t light this fire here. [He points at burning wood spans in smoker.] That’s always done with Rabbi Newman. He is super involved, and has grown to love this. For most of these guys, it’s a lighter, and you are done. But he gets to come here every morning, and — as a kick-back to his eagle scout days — build a real fire.

Let’s talk food. How long does it take to smoke a brisket? Depending on the size, it will be at least 8–10 hours. We are cooking it at 180 to 225 degrees the whole time.

Where does your meat come from?

It’s hard to get meat these days. A third of the kosher processing plants have closed in the last year. On top of that, there is bigger demand than ever. Throw on top of that, it’s the holidays. Generally, nine months out of the year I am the only guy buying every pound of brisket I can get a hand on; right now every house in America wants brisket. Literally. But I can’t be greedy. I get my thousand pounds of brisket a week.

The thousand pounds when cooked down is half that. Which will serve 1,000 sandwiches. 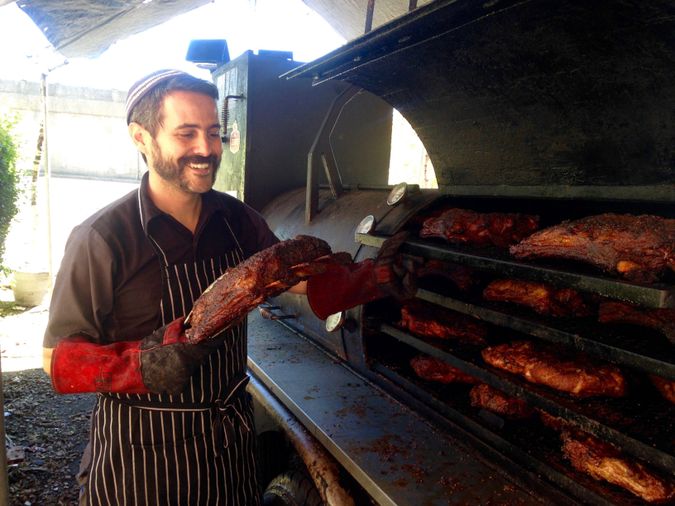 What kind of spices do you use?

Coffee? Coffee is super important. There is a style of rub in the South; it’s called a hobo. It’s things that they could always get their hands on — coffee grinds, sugar, salt and pepper.

Do you use fat or oil?

Honestly, I don’t have to do anything. That right here (points to open smoker) is schmaltz dripping down. That happens to every brisket, except the bottom row, which is why we rotate them.

What kind of wood do you use?

I am all over the place. Oak is probably my go-to. It burns really hot and for a very long time. It takes about a year to season. But there is nothing like fruit wood.

What do you mean, it takes a year to season?

As the wood dries, different things happen. Obviously without water in it, it burns better. Whereas the fruit wood, I actually want to cook it as fresh as possible. When you burn it, it gives this perfume that is just mind-blowing. 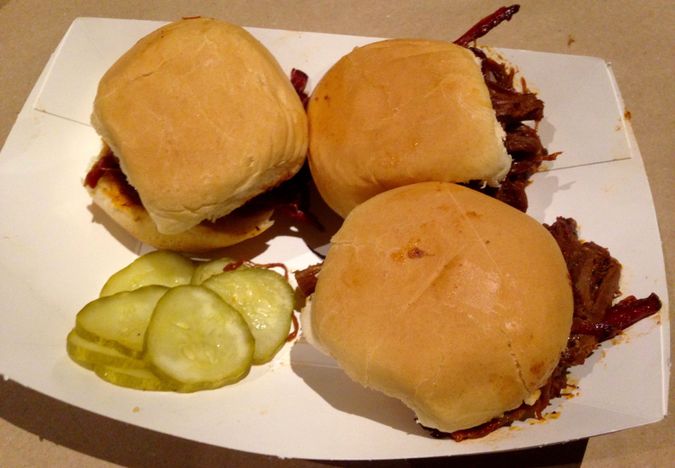 If they haven’t had anything of mine before, I tell them the brisket. Because it’s awesome. And it’s so different than anything you have had.

Speaking of your brisket. You were recently voted “Brisket King of New York”

I am still proud. It was one of my best pieces of anything I have ever put out. So now this year, I am not allowed to compete in Brisket King, actually. Technically as the reigning king, I am supposed to be one of the judges. But it will be funny, because I can’t taste anybody’s brisket. [He laughs.] It’s not kosher.

How do you choose which places the Wandering Que goes to?

The overwhelming majority we do are street fairs. There can be no-brainers like the 92nd St. Y, but then there are always surprises, like the first time we went to West Orange and sold out. They have so few [kosher] restaurants out there that literally the entire community came.

Do you ever think about staying in one spot?

No, I don’t. Let’s say I did open a restaurant. First two years, everyone would be really excited about it and thrilled, but then you are just that place. And I think that is why so many restaurants have such a hard time. 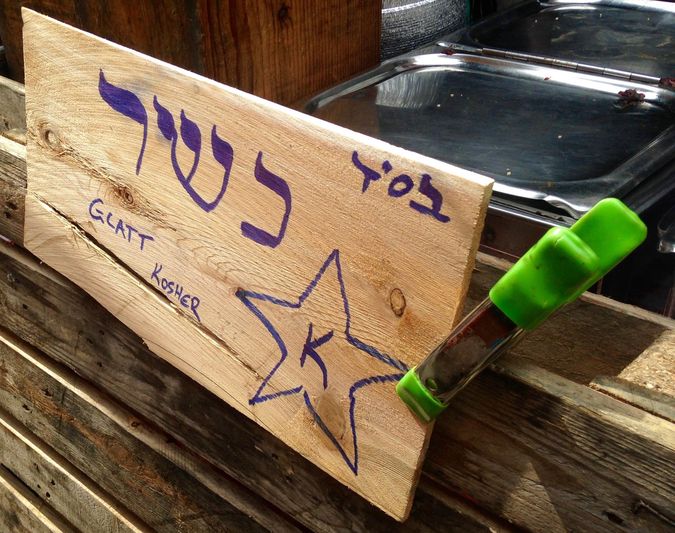 A lot of your customers are not Jewish. Do they realize that you cook kosher?

Some people definitely don’t have any conception. They point at the chicken and ask for the pulled pork.

Do you tell them? Oh yeah. My guys have a million ways to joke around. “No pork on my fork.” “We ain’t down with swine.” [He laughs.]

How do New Yorkers take to Texas barbecue?

Listen, there are actually people who call New York the barbecue capital of the world. There is this romantic idea that it’s all great over there in the South. It’s not.

You have so many barbecue cultures in one place. Guys like me can serve a jerk chicken with my Jamaican crew, and on the same menu have a Vietnamese Banh Mi.

Is there a kosher barbeque trend nowadays?

There is no question that it’s blowing up. I hit the sweet spot. This is just the cooking I have been doing my whole life. And I don’t think I will get credit, but when I look at just about any menu in any kosher restaurant in New York, there is a pulled-barbeque slider or a taco or a jalapeño corn bread. There are things directly from my menu. Everywhere! 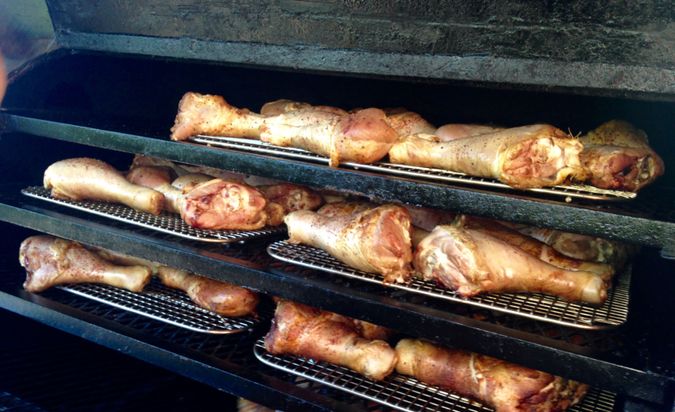 So what are your plans for the future?

Where our growth is really headed is in expanding this into both packaging and regular food trucks, like the ones you see on the street [where food is served out of a truck not a smoker.] Right now, we work really hard to make enough food for one tiny part of the city for one day of the week. So I think getting a lot of this stuff packaged is the most exciting next leap.