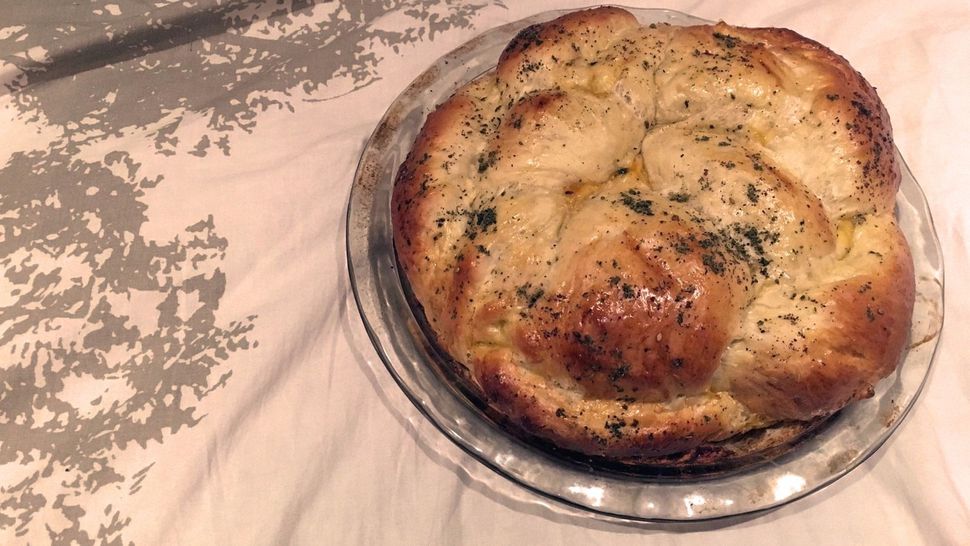 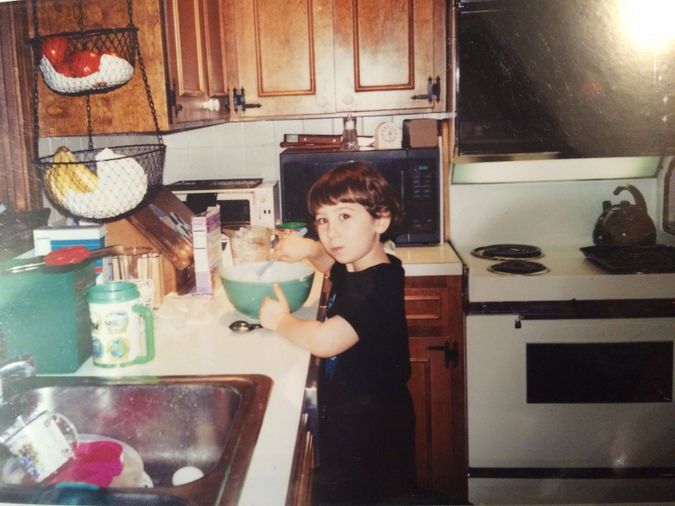 Baking and I have a complicated relationship. It was certainly the first thing I was allowed to do in the kitchen — I was a pro at whipping up brownies, cookies and cakes of the boxed variety (until the oven became involved) as early as age three. But it was also the source of a lot of waste and angst for my parents growing up. Cooking is more forgiving than baking; making “surprise” scrambled eggs for my family one Sunday in elementary school resulted in a scolding for using the electric stove unsupervised, but also in a delicious breakfast. Baking, however, is tougher to master: I believe my father called my first attempt at cookies “bricks,” and promptly chucked them in the garbage. 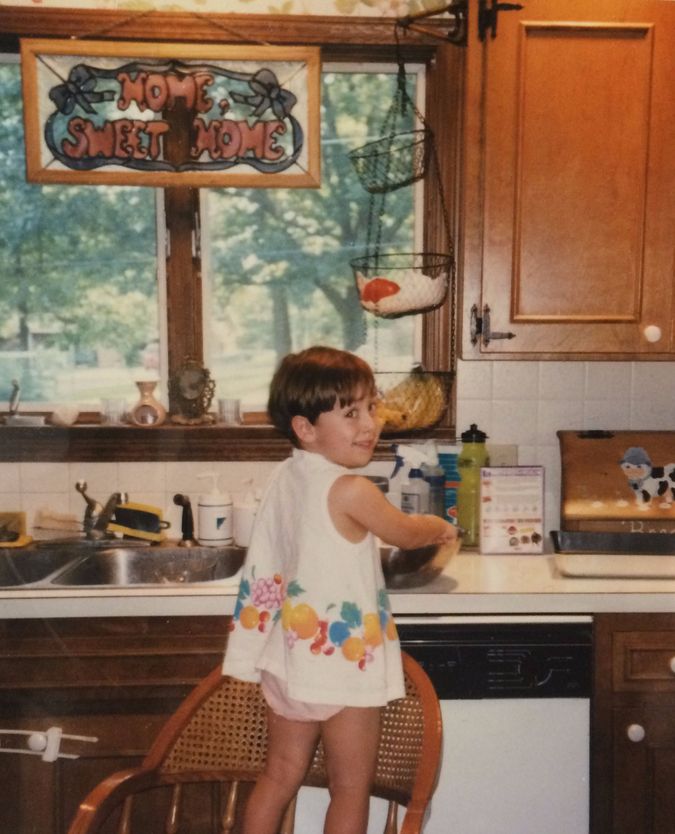 I was blessed — growing up, my parents tended to err on the side of creativity rather than order and discipline, and overtime, I became pretty proficient in the kitchen. But I still have never met a recipe I’m not immediately itching to tweak, and so cooking remains my preference over baking. And yet, there are few things more soul-nourishing than a freshly baked anything — and few things better at bringing smiles to the faces of friends, family and coworkers.

And then I met a cookbook that piqued my curiosity and inspired me to bust out the flour once more. Earlier in October, my wonderful colleague (and our food editor) Liza Schoenfein brought in Shannon Sarna’s enticing new book, Modern Jewish Baker, and was kind enough to let me take it home over the holidays to borrow and bookmark — which I did with my roommate while we ooed and awed over the fanciful uses of flour, colors and spices within (I also discovered I’m not the only challah baking phobic person in the office — check out Liza’s adventures in Pumpkin-Spice challah making here!). 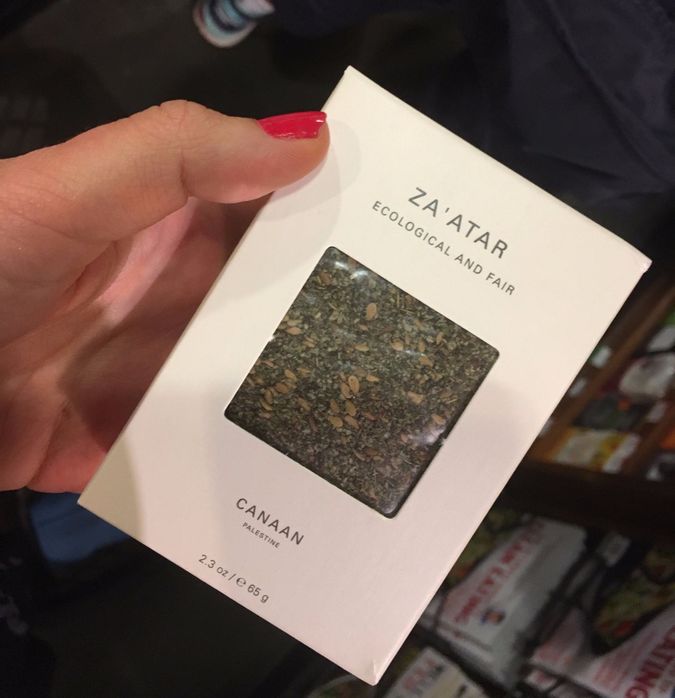 I have a weakness for Middle Eastern spices, za’atar’s nutty and savory taste in particular — just one whiff is enough to remind me of frantic Friday’s in Jerusalem’s Machane Yehuda, the central market, haggling over stacks of warm za’atar-smothered pita fresh out of the oven.

So I immediately knew, despite opting to buy rather than bake my own Shabbat challah 9 times out of 10, that I just had to try Sarna’s Garlic Zaatar Challah recipe this week. I even found some za’atar straight from the (politically contested) Holy Land for the occasion.

And boy, did it exceed expectations — though no, I did not overcome my tendency to modify and simplify. Despite shortening the rising time, having no stand mixer (and no accompanying bread hook), and doing all of the work in two bowls (not one second of kneading on the counter for this impatient woman), I was rewarded with a fluffy, fragrant, delicious challah fit for the Shabbat table and three small rolls for noshing. Despite several ingredient alterations and taking Sarna’s steps as suggestions rather than rules, I was surprised by the incredible difference using bread flour makes; as opposed to my other attempts at challah that often are dense enough to resemble my childhood “bricks,” these challot are nothing if not fluffy. In the future I will certainly double the recipe — this stuff is sure to go fast. Though now that Sarna’s book has encouraged me to face my biggest kitchen fear of baking in the public eye, perhaps it’s only fair that I give the book’s other bookmarked recipes a shot before I do. 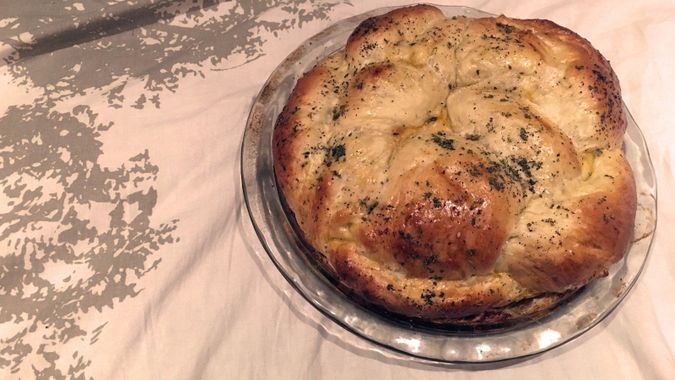 Here’s my modified version — and let me know what you think if you make it for yourself!

1) Proof the yeast by combining it with all of the water and 1 tablespoon of the sugar in a small bowl. Allow 5-10 minutes, or until the yeast has “puffed up” on the surface of the water.

2) In a large bowl, mix 1.5 cups flour, the rest of the sugar, the oil, a pinch of salt and generous pinch of sumac and za’atar. Mix to combine. Add the minced garlic and the water / yeast mixture. Stir to incorporate.

3) Mix in another 1 cup of flour and 2 of the eggs until well combined. Add in another 2 cups of flour — use your muscles!

4) Using your hands, knead the last 0.5 cups of flour into the challah. Knead in the bowl for an additional 5 minutes or so. Place challah in a greased bowl, cover it with a well-saturated towel, and place in a warm place to rise until doubled (1-3 hours depending on humidity, heat, and altitude). In a pinch, you can also let it rise in the refrigerator overnight — just remember to bring it back to room temperature before you proceed with step 5.

5) Form your challot using your preferred method and place onto greased baking sheets. Allow to rise an additional 20-30 minutes. After this second rise, top with an egg wash and more spices. Be generous!

6) Starting from a cold oven, bake at 375 for approximately 30 minutes until golden brown.