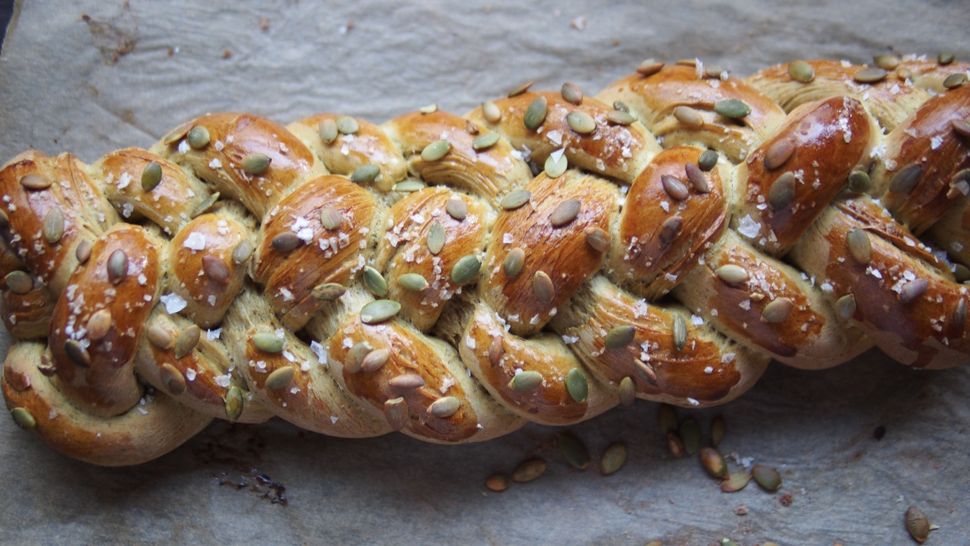 The result of my pumpkin-spice challah experiment yielded a delicious loaf. Image by Liza Schoenfein

Confession time: Until a few days ago, I had never made challah.

I realize this isn’t entirely anomalous among the general Jewish population (though challah-making certainly does seem to be a growing trend). But as the food editor of the Forward, this just felt like something I should know how to do.

And so, upon receiving a copy of the new “Modern Jewish Baker: Challah, Babka, Bagels & More,” by the Nosher’s food editor Shannon Sarna, and upon noticing a challah recipe that seemed particularly autumnal — perfect for Halloween, or a November Shabbat or a Jewish addition to the Thanksgiving table — I decided it was time to take the plunge.

After accepting my mission, I found that there was a second hurdle to address. The loaf in question is called “pumpkin spice challah.” As Sarna herself writes in the recipe headnote, “People have some strong feelings about pumpkin spice: some love it, some loathe it.” She is correct. But a glance at the ingredient list gave me the confidence to proceed. In a recipe that would yield two loaves of bread, only a half cup of pureed pumpkin was called for, along with what looked like a reasonable amount of fragrant baking spices: cinnamon, nutmeg, clove and ground ginger. In addition to pumpkin seeds and coarse sea salt, the challah was meant to be topped with a cinnamon-sugar mixture, which I decided I would sprinkle on only one of the loaves, lest it make the bread taste like nursery food. 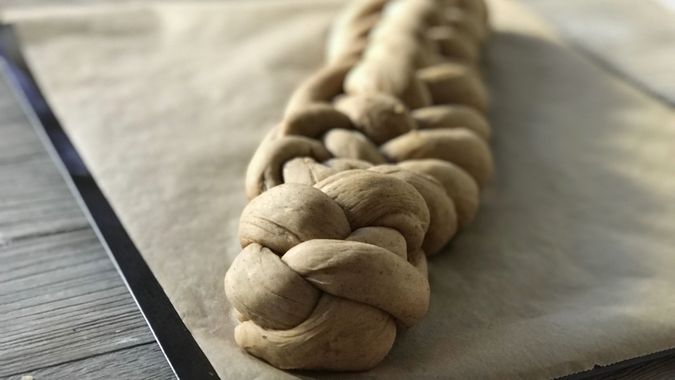 My first-ever challah, before the addition of egg wash, cinnamon-sugar and pepitas, is almost ready to bake. Image by Liza Schoenfein

I amended the recipe in one other way, too — and I wish I could say I did so intentionally. Since I’m in a confessional mood, though, I’ll admit that the modification was a result of small, pale print meeting middle-age eyesight. Where the recipe calls for three-quarters of a cup of sugar, I read the quantity as one quarter. By the time I realized my mistake, my dough was already rising and I rationalized the error with the thought that the missing sugar, had it been included, might have made the challah too cake-like or cloying. 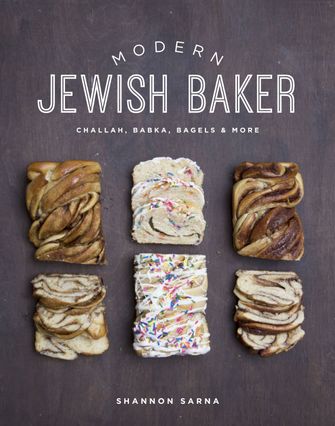 Image by Courtesy of Countryman Press

Before I share the results of my undertaking, I’ll tell you a little about Sarna’s book. “Modern Jewish Baker” is basically a master class in making seven classic Jewish breads: challah, babka, bagel, pita, hamantaschen, rugelach and matzo. First she offers the basic recipe and step-by-step techniques; then she supplies several flavor variations for each type of bread, many of which sound delicious (others a little too “interesting” for my taste).

In addition to basic rugelach filled with jam or chocolate, there is harissa and goat cheese rugelach (yum) and chocolate-peppermint rugelach (not so much?). Hamantaschen might be made savory with brie and herbs or slightly suspect with rye and grape jelly.

I’ve never made babka either, and after starting with Sarna’s basic recipe, I would be curious to try the one made with onion jam, to serve not as dessert but alongside a cheese plate. 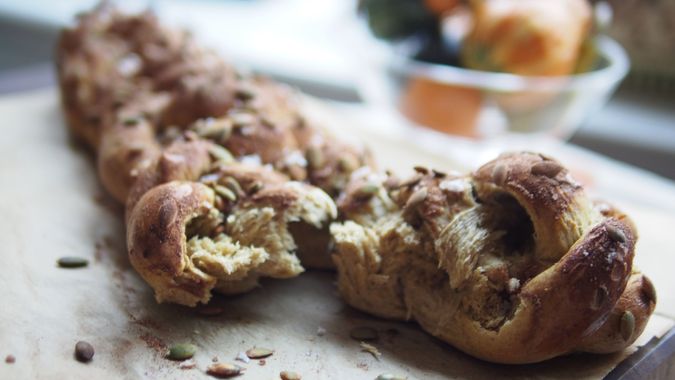 For this loaf I followed the instruction to sprinkle cinnamon and sugar over the egg wash, which yielded a less shiny but beautifully textured challah. Image by Liza Schoenfein

Now back to that challah. The bread was easy (and very satisfying) to make, as well as being both beautiful and delicious when it came out of the oven. It was just sweet enough for me, though I could imagine adding back perhaps another quarter cup of sugar next time around. (I do think that the lower sugar content might account at least in part for the fact that there was absolutely none of the cloying fall flavoring that pumpkin-spice skeptics reject.)

You will never find me making Sarna’s blueberry bagels or the peach, almond and white chocolate rugelach, but I’m definitely thinking about adding her brie and herb hamantaschen and za’atar and garlic challah to my expanding repertoire of Jewish bread recipes.