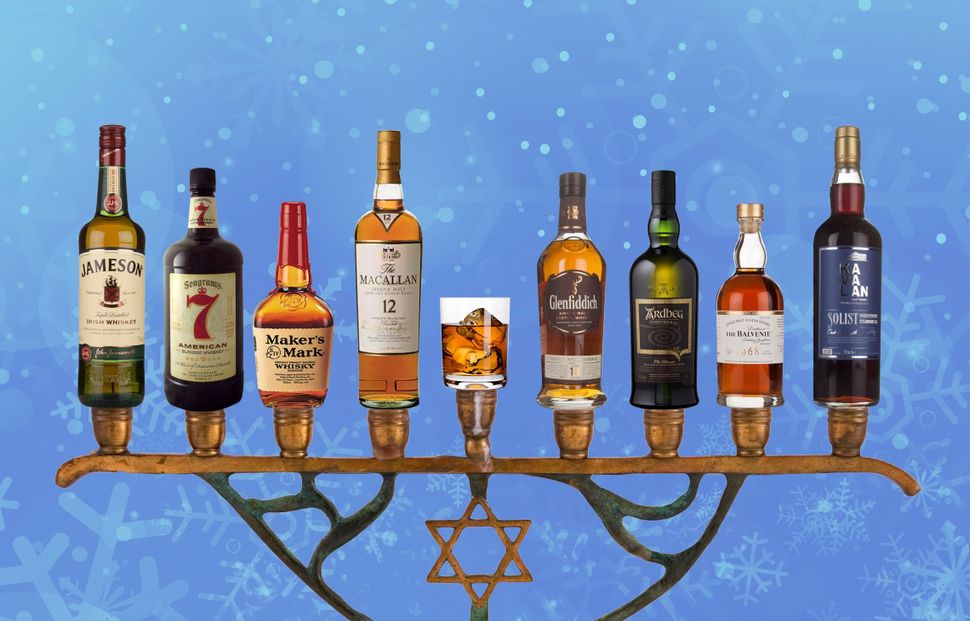 Christmas reputedly has 12 nights, with calling birds, milking maids and leaping lords. Hanukkah has only eight, but during those nights we get straight to the heart of what gets those lords a-leaping. Here’s a whiskey guide to the eight nights. Remember, imbibe responsibly and don’t drink and fry.

1st Candle: Tuesday. This year, Hanukkah starts on a Tuesday night. Odds are you’ve forgotten to buy candles, latkes or presents, so the last thing you need to worry about is getting exotic whiskey. Fortunately, Jameson is delicious, relatively cheap and available everywhere — plus the Irish know how to kick off a party. So light the candles, give the kids the dreydl socks you bought from a store on your way home, sip on the Irish brown and plan gifts and drinks for the next seven days.

2nd Candle: Wednesday. For hump day, a delicious Maker’s Mark bourbon sour. Life has given you lemons (it’s the holidays, but we’re still at work) and you’ve made — well it’s not quite lemonade, but it’s a winter whiskey cousin.

Bourbon Sour Recipe: Take two measures of the bourbon, one measure of simple syrup and half a measure of lemon juice. Serve over crushed ice, and feel the vitamin C fortifying you.

3rd Candle: Thursday. By Thursday you’re getting the hang of it. The latkes are frying, the gelt is on the table, and even the gifts are wrapped. So grab the Seagram’s 7 in honor of our North American Bronfman cousins who, like 20th-century Maccabees, were able to provide whiskey for all eight nights even when the Greekish laws of prohibition had desecrated the Temple of Liquor. With the 7 (until they make a Seagram’s 8 especially for Hanukkah), mix up Seagram’s Hanukkah Apple Sidecar to celebrate the potato pancake you are daubing with sour cream.

4th Candle: Friday night! To usher in the Sabbath Bride, you’ll need four Hanukkah candles and two Shabbat ones. Oh, and a lovely, relaxing whiskey. The Glenfiddich 18 is matured in sherry and bourbon casks, and will taste enough like yesterday’s sidecar to remind you of the good times, but with a real step up in quality that will help you dissolve the cares of the week. In fact, you might even start to wonder whether Scotland might, post-Brexit, consider becoming the 51st of the United States, removing at a blow all import duty on excellent single malt Scotch.

5th Candle: Saturday. Here’s what would be ideal for Saturday night. Your billionaire friend comes over in James Bond’s Aston Martin, bringing his stupidly expensive rare whiskey — say, some $27,000 46-year-old Balvenie. As for the taste, who really knows — even the 1878 Macallan that was selling for $8,000 a dram turned out to be a fake. But it would be mind-blowingly good. And, of course, shaken, not stirred.

6th Candle: Sunday. My favorite whiskey of 5777 was Ardbeg’s Correyvreckan. It’s easy to get a decent but rough-around-the-edges whiskey in the $30–$40 bracket, and it’s easy to spend twice that without anything smoother, deeper or more interesting. But Correyvreckan costs somewhere around $80-$90 and is indisputably worth every penny. It’s a great way to stay in the holiday mood while preparing for the advent of the workweek by drinking a swig or two of a swirling smoky Salt Sea.

7th Candle: Monday. First day back at work or school and everyone’s grumpy after a tiring day. The kitchen, and your clothes, all smell of frying oil. What you need is a wee dram (that’s about a thousandth of a hin, for those of you using biblical measures) of Macallan 12. The pleasant woodiness reminds you that you can build houses on this stuff.

8th and final Candle: Tuesday. By now you deserve an award. Or perhaps just an award-winning whiskey, like the Kavalan Solist Vinho Barrique. Drinking it is like holding a vibrant thrumming crystal up to your palate. It’s sharp, vibrant and fascinating. You can drink it with milk or meat, but the sensation is anything but pareve.

Assuming you didn’t go crazy on the one hand and actually invest in a $27,000 bottle of whiskey — or, or on the other hand, drink everything you bought — try to you should have garnered a few new potables for your sideboard over the course of the candle lightings. These delicious new whiskies you have gathered over the course of the candle lightings should help you get through the rest of your winter holidays. Just rinse and repeat!

Come meet Dan and taste some of these whiskies at the Skirball Cultural Center Hanukkah Cocktail Party in LA on December 14 or at New York’s 14th Street Y, at the Pause/Play program on December 2.