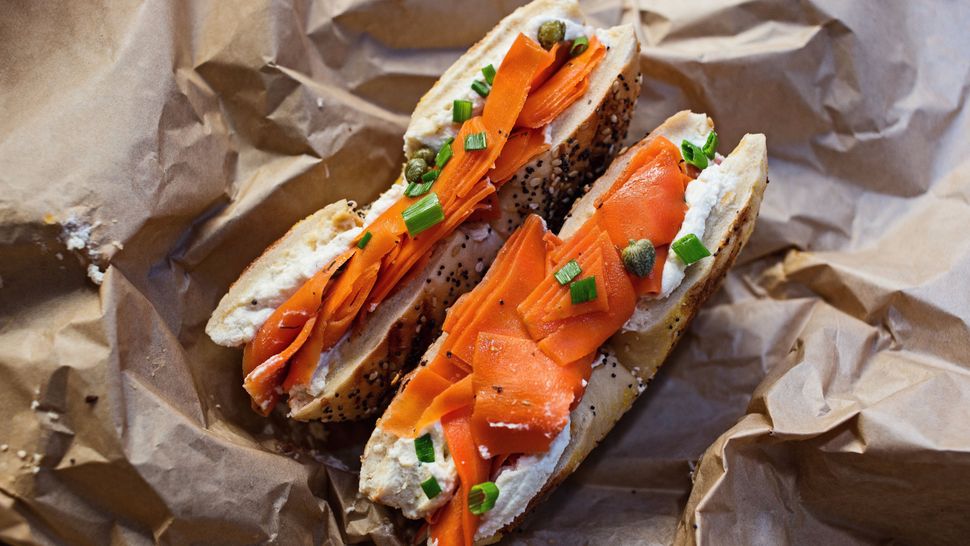 You Won’t Miss The Fish: From Orchard Grocer, ‘The Edith’ is a Baz bagel topped with a schmear of house-made cashew cream cheese and carrot lox. Image by Courtesy of Orchard Grocer

For vegans, is this a golden age of dining? Judging from these 10 fabulous plates, which make magic minus the meat, the answer is “absolutely.” Some of the eateries on our list are kosher; some are modern Israeli, or Israeli-inspired. A couple of them have Jewish chefs. Whatever their orientation, they might coerce even committed carnivores to go green — especially now that we’re trying to lighten things up post-holiday season. Here are our favorite vegan dishes on menus right now.

Sunny side roll at Beyond Sushi, New York
www.beyondsushinyc.com
It’s hard to choose a favorite at this vegan-sushi pioneer, but chef Guy Vaknin’s elegant concoction of black rice, braised fennel, sundried tomato and avocado topped with butternut squash and almond pesto looks as exquisite as it tastes. Bonus: The chainlet’s now kosher.

Roasted eggplant at Proxi, Chicago
www.proxichicago.com
The restaurant’s not vegan, but this Middle Eastern-accented appetizer at chef Andrew Zimmerman’s new West Loop hotspot is. Creamy tahini dotted with ruby pomegranate seeds surrounds smoky, tender eggplant. Just tell your server to 86 the side of paratha, made with a touch of yogurt.

Whole-roasted carrot at Vedge, Philadelphia
www.vedgerestaurant.com
It’s hard to pick a favorite at chef Rich Landau’s superlative Philadelphia vegan spot. But brilliant simplicity makes the whole-roasted carrot a favorite. The dish is a labor of love: Carrots get blanched, cooled, split, roasted, spiced, charred, smoked and chilled before hitting the plancha. “We are doing the same amount of work a lot of chefs would put into a protein,” Landau has explained. We appreciate it, chef.

Winter vegetable tabbouleh with carrots, pears, fennel and bulgur at Ema, Chicago
www.emachicago.com
Before he went pro in the kitchen, chef C.J. Jacobson landed in Israel as a competitive volleyball player. Maybe that’s why his tabbouleh is such a winner: vibrant, tender and bright, and brilliantly tweaked with pears, carrots and fennel. Take some home — it’s even better a day later.

Bagel with cream cheese and lox at Orchard Grocer, New York City
www.orchardgrocer.com
Locals and visitors alike schlep to Orchard Grocer just to taste the Edith, a giant schmear of house-made cashew cream cheese and carrot lox on a plump bagel from the nearby appetizing shop Baz. You won’t think you’re eating dairy and fish, but that’s not the point: This tradition-inspired sandwich stands on its own as a delicious landmark.

Buffalo hen of the wood “wings” at PS Kitchen, New York City
www.ps-kitchen.com
At this stylish kosher newbie, meaty hen of the wood mushrooms sub in for chicken wings. Fried and slathered in buffalo sauce, they ace the job. German purple sweet-potato salad accompanies the “wings,” along with house blue cheese dressing — dairy-free, of course.