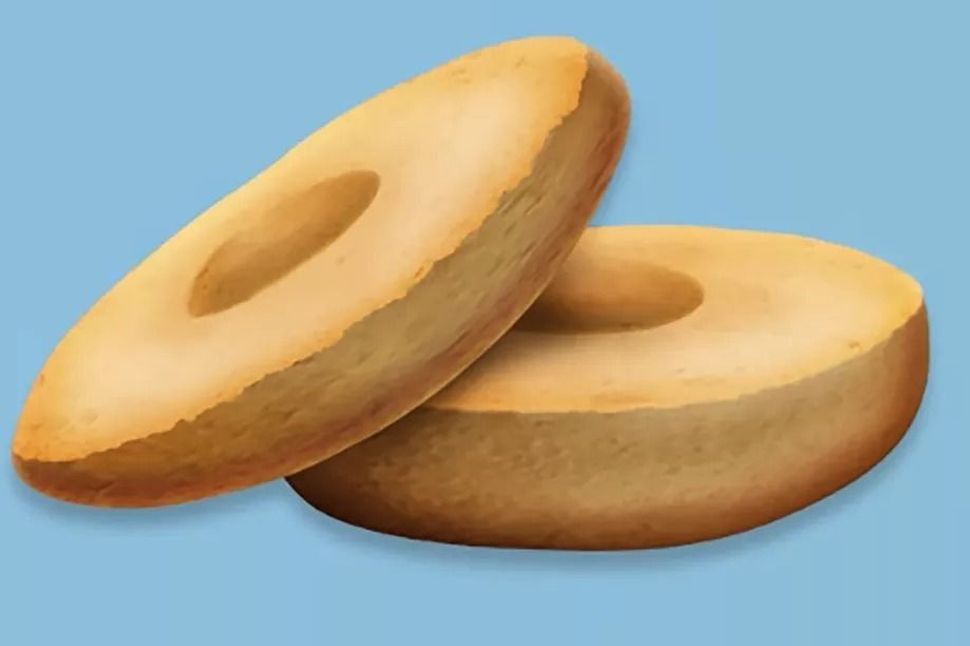 The bagel emoji in all her controversial glory. Image by Emojipedia

She’s flat. She’s a soft shade of beige, gently browned at the bottom. She’s naked, no toppings in sight. She’s the new bagel emoji, and she’s created a schism in the Forward editorial department.

It’s breaking news in the food world: the bagel emoji that we spoke of in February (and argued about, obviously, because two Jews, three opinions) is finally making its way to your phone.

At first glance, I immediately considered the bagel emoji to be a welcome addition to the witty archive of unicorns and gold stars that I incorporate into my daily texting repartee. In the following months, after much consideration of the bagel emoji, I have done sincere teshuva (repentance).

Reader, I was wrong. My fellow, more critical colleagues, their eyes trained firmly on the objective truth, quickly pointed out the obvious: the emoji we had been given was trash.

It’s bad, dear Unicode Consortium. The bagel we have been given is no bagel at all, but rather more of a circular cracker.

Computerize some pixelated lox on it — and then we’ll talk.

In fact, a new petition created by Philadelphia cream cheese company, a staple of Jewish culture, and of bagel culture (which one might argue are one and the same) is looking to change the bagel emoji for the better. After all, what is a bagel without a dollop of cream cheese so excessive one must wipe it off with a napkin before eating? “If we reach our goal of 30,000 signatures, we will be able to show Apple and the Unicode Consortium that the current dry, sad bagel emoji is unacceptable,” they wrote on Change.org. Thus far, 986 bagel fans have rallied behind the petition.

Shira Feder fears she has been overly harsh, but whatever. She’s at [email protected]