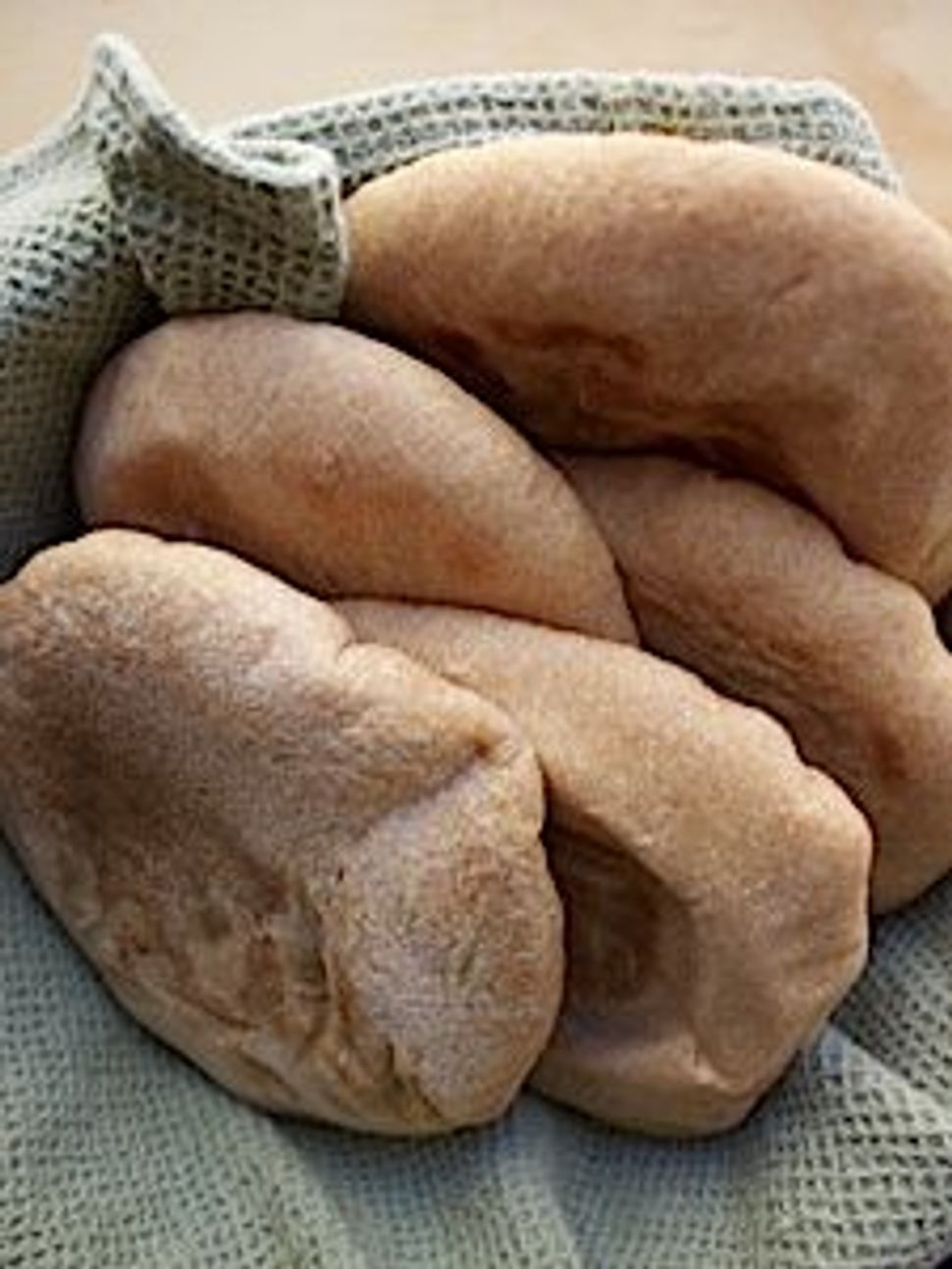 Until recently, my conception of pita was probably similar to that of most Americans: thin, dry stuff that lacks in taste… a poor translation of Israel’s version. Anyone who has been to Israel or any Israeli restaurant with house-made pita knows what I’m talking about — a thick, spongy, warm little loaf that has a perfectly sized pocket that maintains its composure as you stuff it full of falafel. It’s a staple in Israel, but a luxury in America; a phenomenon that I was completely oblivious to until moving to New York City.

So imagine my alarm last week when out of nowhere, like a pregnant woman craving pickles, I needed Israeli pita. Every day. Lunch and Dinner. Maybe for a snack in between. My go-to places in New York were draining my wallet, those cardboard-like things from the grocery store weren’t going to cut it, and, oops, landlord forgot to install the wood-fired 1000-degree oven. Crap.

This isn’t to say that other pitas don’t make the cut. They do. Take, for example, the Greek pita, which is often buttery and pocketless and wrapped around souvlaki. Or Turkey’s pide, which is pocketless and topped with cheeses and meats, like a pizza… Bulgaria’s pita gets along well with honey, and Bosnia’s is oft served with egg yolks on top, Israeli’s pita is the thickest and doughiest of the bunch. What I was craving was that texture.

Luckily, the team at New York City’s beloved Israeli café Hummus Place were generous with their pita knowledge and secrets. “I don’t call them pitas. They’re just pieces of bread,” said Tali Liberman, a Hummus Place employee and Israeli native, when describing her reaction to store-bought pita in the states. She spoke over the hum of an industrial-sized mixer that was kneading enough dough to make 240 whole wheat pitas. Ori Apple, the owner of Hummus Place, pointed out that this dough would be going through three separate rising periods before being baked in one of his two Israeli-imported pita ovens. The ovens cook the pita on a conveyor belt made of metal plates, which get extremely hot and help to distribute the heat evenly. The oven’s opening is just slightly taller than a pita at its puffiest, and from start to finish, a pita is only in there for about a minute.

“It’s gotta be stretchy, you don’t want it to be stiff,” said Apple, who learned to make pita in Israel, while describing what a pita should be, “The most important thing in a pita is you gotta make sure it’s even in the walls on both sides.” The walls are what form during the baking when the pocket forms and the pita puffs up, due to extremely high heat. Thick walls are unique to Israeli pita, and there should be plenty of little stringy fibers (or, “hairs,” as Apple calls them) in each of the walls.

According to Liberman, most Americans that come into Hummus Place order the whole wheat pita, while most Israeli’s order white. Neither is more authentic, and each is equally good. In Israel, you’ll likely find a nice freshly baked doughy pita at every supermarket and restaurant, filled with things like schnitzel, shawarma, and the all-too-fun-to-say shakshuka. But until American grocery stores discover what they are missing, making them at home is worth the effort. The best at-home substitute for a special pita oven is a pizza stone. Preheating a pizza stone will facilitate even heating, but if you don’t have one, preheating a metal cookie sheet will help you get by. These taste best right out of the oven, but if you’re saving them for later, do what Hummus Place does and toast them a bit before serving.

Mix the yeast and sugar with the warm water to “proof” it.

In a large bowl, combine the flours, the olive oil, and the salt.

Once the yeast mixture becomes foamy at the top, stir it in to the flour mixture. Once dough forms, turn on to a floured surface and kneed for a good ten minutes. Cover and let rise until doubled in size, about 40 minutes.

Punch down the dough, and form into six even balls (no kneading is necessary). Cover and let rest for 20 minutes. Preheat oven on the highest heat setting (500 degrees works) with a metal cookie sheet or pizza stone on the lowest rack. It is important to let your oven preheat fully before baking the pita.

With a rolling pin, roll out each ball into a circle that is 1/2 inch thick. Cover and let rise until it is 3/4-1 inch thick, about 40 minutes. Baking two at a time, transfer the pita to the hot pizza stone or cookie sheet, let bake for 1 1/2-2 minutes, or until the pitas puff up. Flip to brown the other side, about another minute or two. Cool for a few minutes, and then enjoy with hummus, schnitzel, peanut butter and jelly, or anything else you’d like!