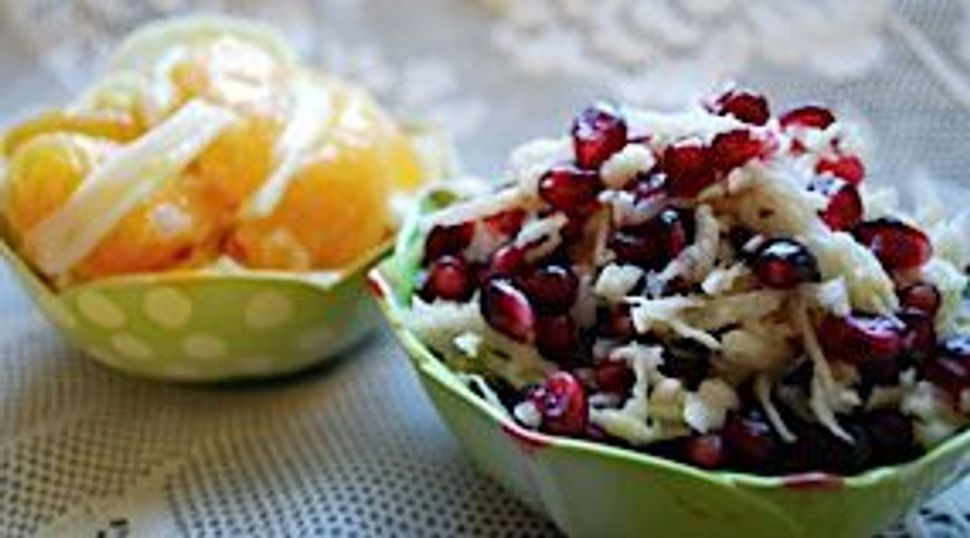 The miracle of Hanukkah was not, alas, brought about by a latke. The eternal flame, it seems, was kept alive not by everyone’s favorite fried Jewish food, but by olive oil. According to historians, there can be little doubt that the oil used to light the menorah 2,200 years ago was olive oil. In ancient times it was used for everything from lighting to food to cosmetics.

Today, we honor the place of oil in our history by making fried food the centerpiece of the Hanukkah feast. No one seems to be able to say exactly why fried food, as opposed to olive oil, gets the spotlight, but it’s likely because olive oil was not available in Eastern Europe, from whence comes the latke. The next best thing, which was plentiful, would have been rendered chicken or goose fat, otherwise known as schmaltz. By frying up potatoes in schmaltz, a European Jew of modest means could make a dish that commemorated the miracle of Hanukkah closely enough.

But, perhaps now is a good time to give olive oil its rightful place back at the table, against a culinary backdrop where it can really stand out. I suggest contrasting those wonderful fried dishes with a crisp, palate-cleansing salad that’s dressed in the golden liquid. The two salads below — Oranges and Shaved Fennel, and Pomegranate and Grated Celery Root — are so tangy, and fruity, with a delightful crunch, you may want to skip the applesauce and put these on your latkes instead.

Although neither of these recipes are exactly traditional, they are relevant to the history of Jewish cuisine. In the “Encyclopedia of Jewish Food,” author Gil Marks writes that fennel was a popular food among the Jews of Italy before the rest of the country caught on to its flavor in the latter half of the 19th century. There is even a dish called “Finocchi a la Giudia,” Jewish-style Fennel, where fennel is braised with garlic. Pomegranates have a more direct tie to Jewish tradition. They were believed to have 613 seeds, like the 613 commandments of the Torah, and are often associated with the Rosh Hashanah celebration, the many seeds representing a hope for many good deeds in the new year.

When it comes to choosing what kind of olive oil to use, choose wisely as the taste will come through clearly in these salads. Extra virgin oil, with its extremely low level of acidity, is meant to be eaten raw in salads, spreads, or on its own, where its delicate flavor and aroma can be fully appreciated. It’s made from the first pressing of the olives, and is not refined or heated in any way during production. Because really good olive oil tends to be peppery, neither of these salads calls for black pepper. If the oil is good, you should feel a hint of spice on the back of your throat when you taste it.

My personal recommendation is to seek out an organic olive oil from California. They tend to be of excellent quality, and after the big olive oil scandals from a few years ago — when lower quality oil from Europe and the Mediterranean was being falsely labeled as “extra virgin” — I prefer to buy from a verifiable source. Several Israeli Oils.

So, this holiday, let the olive oil flow — just don’t fry with it! Here’s to bringing the flavor of the original miracle of light to your table this season.

1) Place the shallot in a small bowl and pour the olive oil on top. Add ¼ teaspoon salt and stir. Let this mixture rest for 15-30 minutes, to soften the flavor of the shallot.

2) Break off the outer leaves of the fennel, and slice off the fronds. Cut the fennel bulb in quarters, and slice out the white core. Shave the fennel thinly with a sharp knife or a mandolin, and place it in a large bowl.

3) Do your best to remove the white pith from the outside of the oranges. Working over the bowl of fennel to catch the juice from the oranges, break the oranges into segments, and then cut each segment in half. Remove the seeds. Combine the oranges with the fennel. Pour the olive oil and shallot mixture on top, and toss to combine. Salt to taste.

1) In a large salad bowl, whisk together the lime juice, olive oil, honey, and a pinch of salt.

3) Cut shallow slices around the pomegranate, and break it open along the slices. Remove the seeds and add them to the celery root. Toss until the celery root and pomegranate are well coated with the dressing. Salt to taste.