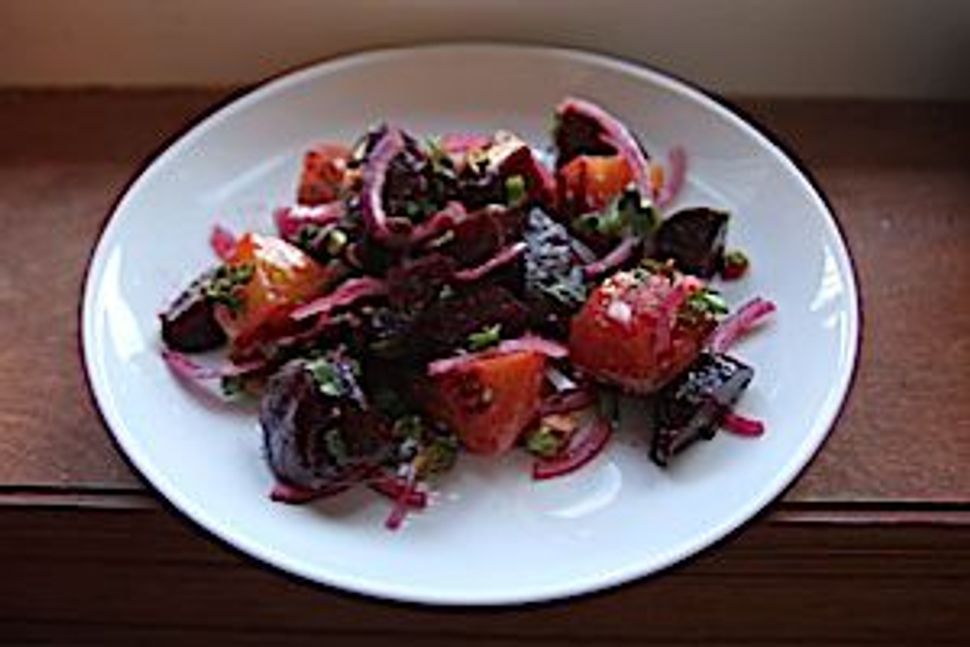 After more than 15 years of marriage to his Jewish wife, chef Todd Gray considers himself something of an authority on Jewish food. But the James Beard Award-nominated chef of Equinox Restaurant in Washington, D.C. is quick to point out that he didn’t always know the difference between kreplach and kneidlach.

“I had no exposure to Jewish food prior to meeting Ellen,” Gray said, referring to his wife Kassoff Gray, who co-owns the restaurant. Together the couple has written [The New Jewish Table: Modern Seasonal Recipes][1], which appeared in stores this month.

Gray hails from Fredericksburg, Va., where “the number of Jewish people could be counted on one hand,” he said. When he attended the Culinary Institute of America in Hyde Park, NY, he began trekking south into the city for tastes of bagels and pastrami sandwiches. But it wasn’t until he met Ellen — and soon afterwards, her Jewish family — that he gained a deeper understanding of the ingredients and traditions behind Eastern European-style Jewish food.

The Grays have poured their years of knowledge of Jewish cuisine into the new cookbook. Inside are more than 125 recipes for updated dishes such as Beef Short Ribs in Red Wine and Matzo-Stuffed Cornish Game Hens. Like the food Gray cooks at his restaurant, the recipes stress seasonality — they’re bunched according to winter, spring, summer and fall — and call for local produce wherever possible.

The book is laid out cleanly and its glossy pages are full of bright, full-color photos. Home cooks who keep kosher will appreciate that each recipe is marked parve, dairy, or meat (note: some recipes mix milk and meat; such recipes are labeled “mixed”).

The cookbook’s March release date is perfect for Passover cooks looking for new inspiration this year. The book includes a holiday menu with items such as Quinoa Salad with Figs and Mint and Todd’s Modern Day Brisket, which calls on French ingredients such as mustard and a rich veal stock.

A salad of roasted beets, also included on the Passover menu, was easy to prepare: the red and golden beets are folded with a bright lemon dressing and salty-sweet elements such as golden raisins, capers and chopped pistachios. Even the cookbook’s more time-intensive recipes do not use advanced techniques, and are approachable for a home cook.

Interspersed between the recipes are anecdotes from the couple’s mixed marriage.

“Ellen has so many hilarious stories to tell about her Jewish household and all the food that seemed to flow through those Kassoffs,” Gray said.

Salad of Roasted Heirloom Beets with Capers and Pistachios

Todd: I just love the combination of red and golden yellow beets in salads, but you have to be careful to bake the two separately so the former don’t bleed into the latter. It doesn’t affect the taste if they do, just the appearance, so try not to let the salad sit very long after you’ve added the dressing. For a bigger salad, you can mix this with baby salad greens and top with shaved Parmesan cheese.

Bake the beets. Preheat the oven to 325°F. Rub the olive oil over the beets and sprinkle them with salt and pepper. Loosely wrap each type in a separate aluminum foil packet. Place them in the oven and roast until the beets are tender and can be easily pierced with a sharp knife—about 60 minutes. Transfer the packets to a wire rack, unfold the foil, and let the beets cool. Peel the beets (use rubber gloves to keep your hands from staining) and cut them into bite-size chunks; place in a large bowl.

Mix the salad. Add the pistachios, capers, raisins, and onions to the bowl with the beets. Pour in the Lemon Vinaigrette and toss to mix. Taste the salad and add more salt or pepper if you wish.

Toasting Seeds and Nuts You can toast seeds and nuts in a toaster oven or your regular oven. Ellen likes to spray them with olive oil and sprinkle them with salt before toasting—this gives them a flavor boost and helps them to brown. Preheat the oven to 325°F. Spread the seeds or nuts on a baking sheet and bake until nicely toasted, stirring or shaking as necessary so they evenly brown—for about 5 minutes. Let the seeds or nuts cool before you crush them or add them to room temperature or cold ingredients. That’s all there is to it.