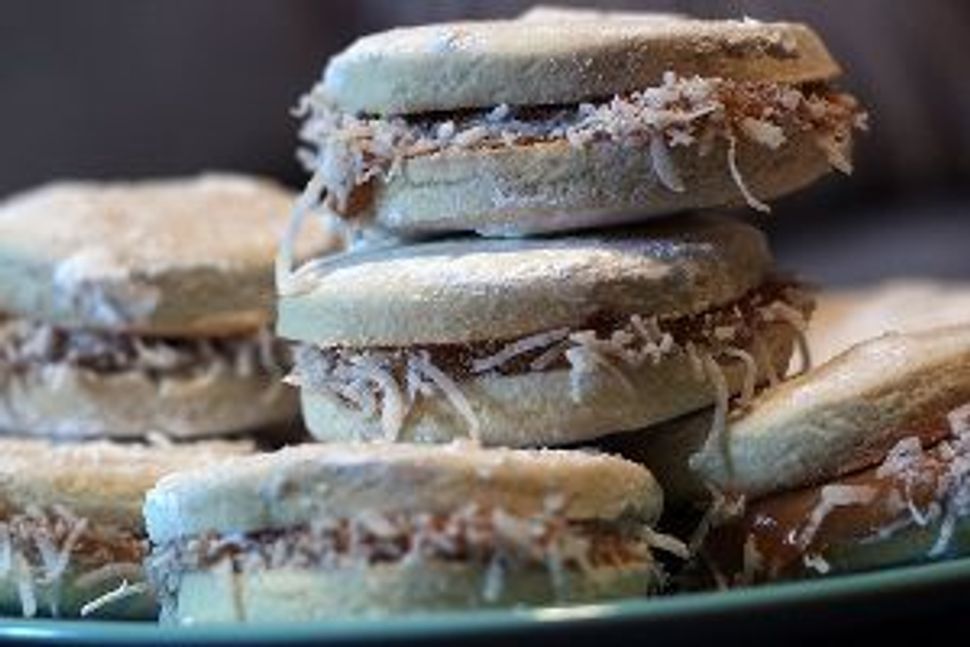 The film was done with an extremely low budget and a very talented team, who devoted their time and expertise to bring the film into shape. During the production I met a remarkable group of human beings, who opened my eyes to new worlds, which were so far, almost unknown to me. I grew up in Chile, and my childhood flavors melt between the local kitchen of empanadas, pastel de choclo (corn pie) and alfajores, with the taste of the Besarabian Jews, who carry a traditional Ashkenazi cuisine, with a Mediterranean twist. For me the definition of Jewish food was fried gefilte fish with smoked eggplant puree.

I realized that in my German language course, Shaul, an Israeli composer always brought home made snacks for us to share. I sensed he had a feeling about cooking and started talking with him about it. He became my first “casualty”, and we filmed him preparing an ancient Persian dish called Ghorme Sabzi, the last string of a long history of Jewish life in Iran, now de facto extinct.

Another Israeli star was Ariel, who we met at a bat mitzvah party. He is an actor; but also do catering as a sideline business. At the reception he introduced some of the dishes as “his grandmother’s recipe”, and that rang a bell. The close connection between his cooking and his grandmother is really moving, and his family recipes travel all the way from Tel Aviv to Istanbul and from there to southern Spain, where the taste of Almodrote –an eggplant and white cheese pudding prepared for Pesach- disappeared with the Inquisition. I was so moved by this fact, that this year, when my family and I spent Passover in Andalucia, my mother and I prepared Almodrote for the Seder, which used to be a sort of “forbidden dish”.

At my German course I also met Anja, a young Ukrainian girl who was working as an au pair at the house of the Shapiro’s, a very observant family, who were originally from Russia. Anja was so thrilled to meet a South American woman with such an Eastern European surname, that the family invited me and my family for Shabbat dinner. Tasting Nadia’s cholent and asking her if she would be interested in be part of the film was almost automatic. I was amazed to discover that she had to learn Jewish cooking the hard way, as there was nobody at home to teach her, as she grew up in Soviet times where keeping a Jewish life was very difficult.

On the contrary to Nadia, Pesha -who was introduced to me by a friend in common- grew up in a very traditional and kosher home in New York. Her love for the German language brought her to Germany, where she lived a very secular life until she rediscovered kashrut as a pillar of a spiritual and environmentally friendly lifestyle. Now she combines her Bobe’s mixed beans soup with a vegan philosophy, which she shares with her daughter. In a more traditional approach to spirituality, Leon decided to become a Mashgiach (kosher supervisor), and check that the kashrut of the Jewish kitchens is in order. Born in Moldova, her grew up in Israel and Germany. For him, coming back to kashrut is coming back to the answers, and he puts together the taste of his childhood memories at his grandmother`s kitchen with a sophisticated and stylish cuisine.

And last, but not least, I decided to film the challah baking at Bambinim, a children’s playgroup run by the JDC. Yahel, a young American girl from Argentinian parents, revived her own childhood memories from school, by baking challot with the little ones. And although it might sound simple and obvious, are indeed in these little poppy seeds where the secret of continuity lives. Because food brings us back to our most precious moments in time, it is a journey through our unconscious, and not many have the strong will to build it up on their own, reconstructing recipes and imagining how the kitchen of their ancestors might have tasted. Jewish food is the ticket to travel back into the smells of tradition and our boarding pass to fly into the future of a solid Jewish identity.

My fathers’ aunt, Anita, was the younger sister of his maternal grandmother. I had the honor to have met her, as she was died quite elderly. She emigrated from Kishinev (today Chisinau, capital of Moldova) in the 1920’s. She grew up in Orhei, a shtetl 50 km away from the main city, where she probably learned the recipe of this “fake” varenikes, a sort of semolina and white cheese dumplings.

Beat the white eggs till they get hard. Add the yolks, salt, the semolina, butter, flour and at the end the white cheese.

Bring water to boil in a big pot. With a wet spoon start dripping the soft mixture into the boiling water. When the dumplings are light and floating, take them out of the water, and continue with the rest of the mixture.

Serve hot, with butter and /or liquid cream.

Daniela Rusowsky is a culinary anthropologist, documentary filmmaker and journalist. She is also the Director of Communications at Nature Heritage