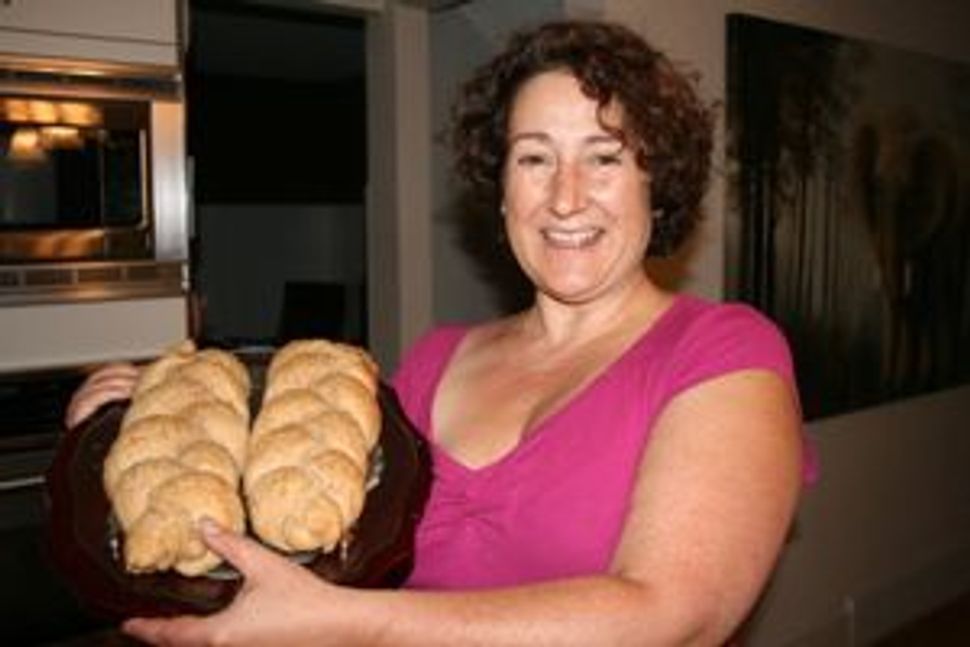 Image by Courtesy of Stephanie Botvin

I got to sit down with Stephanie Botvin, winner of the 2013 Challah Contest at the Rocky Mountain Food Festival, who was already convinced from the start that she made the best challah in Denver. After having tasted her challah, it was no surprise why she won.

With a unique cake-like consistency, the use of honey, tofu (replacing eggs), and whole-wheat flour, this challah definitely sets itself apart from the rest. Stephanie told me how her challah baking brings her into the Shabbat spirit, how her participation in the food festival helped her shed new light on Jewish food issues, and how her transition to Denver from the East Coast inspired her to make this award-winning challah in the first place. She generously gave me a loaf to take home, which was finished off that afternoon.

So what is the story behind Stephanie’s delicious and unique challah? After moving to Denver from the east coast, Stephanie became nostalgic for a “rich and cakey” challah that she loved from one of her favorite bakeries in Boston. A friend of hers had given her a recipe that reminded her of the cakey consistency. She has made challah baking a family tradition, making it just about every week.

Besides the fact that Stephanie couldn’t find a challah in Denver that was up to her satisfaction, she says baking the challah is not only cheaper and healthier, but it helps her and her family enter into the Shabbat spirit. “It inspires us to do a whole Shabbat dinner and say the prayers”, she says.

This was Stephanie’s first time participating in the food festival, a friend of hers who participated last year convinced her to enter her challah in the contest. Stephanie thoroughly enjoyed the food festivities, getting to listen to interesting speakers and attend relevant seminars. “One of the seminars that I went to was about food entrepreneurship, that was one of the things I was thinking about, possibly marketing my challah”, she said. And I have no doubt that she could.

Her challah didn’t always turn out perfectly, however. With the flour being drier in Denver, it made for a challah that lacked moisture. After experimenting with the recipe several times, she finally found the right amount of each ingredient and also found that letting the dough rise for longer got her the consistency that made her challah so special.

Stephanie was also very impressed with the positive energy around the Jewish food movement. “There are a lot of people who identify with their Judaism through cultural things, food is a huge part of that. It’s a way of drawing people into the Jewish community that are not comfortable in a synagogue setting”.

It was a pleasure talking to Stephanie and learning how the food festival was so successful in introducing and engaging people in the Jewish food movement and the Jewish community in general. As an added bonus, anyone who was lucky enough to have tasted her challah that day must have come home pretty satisfied and inspired about perhaps baking their own challah!

I wasn’t lucky enough to receive Stephanie’s challah recipe, she’s determined to keep those secret ingredients to herself, and honestly, I can’t blame her, it’s an award-winning recipe after all.

Stephanie Botvin lives in Southeast Denver with her husband, who is also a foodie, and their four year old son. She continues to make her challah every week and is excited to participate in other Hazon festivities in the future.

Rebecca Cohen, originally from the San Francisco Bay Area, will be a junior at the University of Oregon where she studies French, and is also interested in pursuing journalism. She has always been an active member of her Jewish community, and has thoroughly enjoyed interning with Hazon in Denver where she can combine her love of food, Judaism, and outdoor fitness.