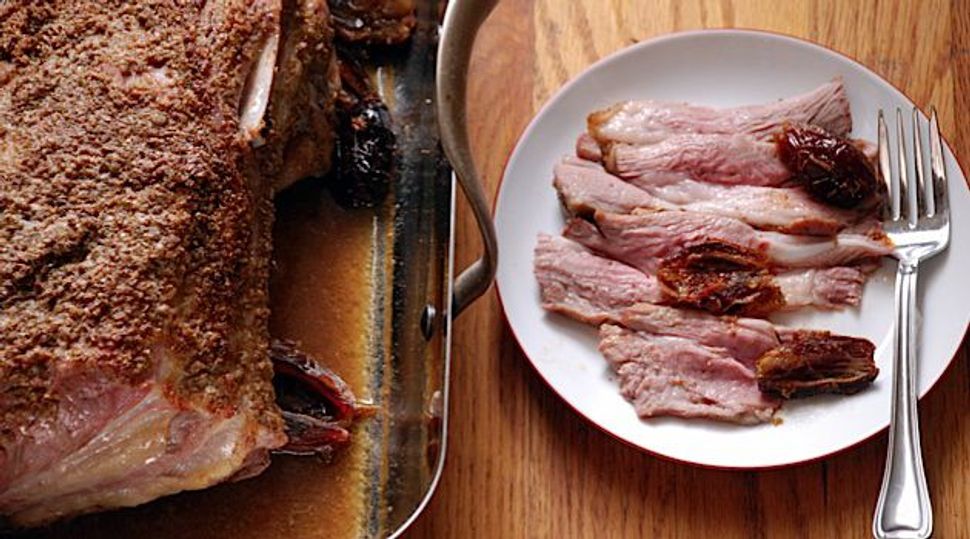 Taste of the Far East: Lamb shoulder rubbed with spices and braised in beer and broth creates a succulent holiday dinner. Image by Rivka Friedman

As rich as the Ashkenazi Jewish tradition is, twice each year I wish I had descended from Sephardim. The first time is, of course, on Passover, when Sephardic tradition allows for grains. I imagine Passover breakfasts of sweet corn pancakes, and big, filling dinners of fried rice with spring’s first peas and scallions, and Passover suddenly sounds much, much tastier.

The other holiday when I wish I were Sephardic also involves a Seder — at least for Sephardic Jews. That would be Rosh Hashanah. While Ashkenazim will be ripping into round challah and dipping apple slices into honey, families with Sephardic and Mizrahi roots will be feasting on bountiful spreads of foods, each symbolizing a wish for the year to come.

The Seder involves staples of Sephardic cuisine: dates, pomegranates, squash, black-eyed peas and, perhaps most famously, the head of a fish. Each of the designated foods corresponds to a blessing that includes a pun on the name of the food: For example, when eating carrots, gezer, one says, “May it be thy will to repeal our evil decree (‘gizar dinenu’).”

Though we won’t be conducting a Seder at my table this Rosh Hashanah, I wanted to draw on the Sephardic flavors of the Rosh Hashanah Seder in planning my main course. So this year I passed over the brisket, opting instead for a lamb shoulder (which, I’ve read, Sephardim traditionally make on Passover).

The inspiration for this lamb recipe came from an extraordinary meal I had at the New York outpost of Danny Bowien’s San Francisco-based Mission Chinese. Dinner involved heaps of homemade rice noodles and mind-blowingly spicy Mongolian long beans. But the dish that really blew us away was sizzling cumin-rubbed lamb belly served on a smoking-hot cast iron pan with wilted watercress and sweet, sticky dates. We returned that skillet without a speck of food on it. I’ve never cooked with lamb belly, but after eating that dish, I knew I had to at least try to replicate it.

Lamb shoulder seemed like a safe place to start; it’s an unfussy cut of meat that requires only some casual monitoring toward the end of cooking. If you use a good product, the lamb itself does most of the work.

I rubbed the shoulder in a pungent mixture of cumin and coriander, and braised it in a broth of lamb stock and beer. Best of all, I added a handful of dates to the mix, which turned sticky and soft in the cooking liquids, just as they had at Mission Chinese. The result was definitely less spicy than Bowien’s lamb belly, but no less fragrant. The cumin and coriander evoke the East, and though my dates came from California, they tasted as sweet as those I’ve had in the Middle East. Overall, an incredible dish — more than enough consolation for not being Sephardic on Rosh Hashanah.

This lamb shoulder makes a star centerpiece for a Rosh Hashanah dinner. I’ll be serving it on a bed of spicy pureed sweet potatoes, but tahdig — the Persian rice dish with the beautifully bronzed, burnished crust — would make a great accompaniment, as well.

Rivka Friedman is a writer living in Washington D.C. She blogs at www.notderbypie.com.

1) Set a rack in the center of your oven and preheat the oven to 450 degrees Fahrenheit.

2) Pat the lamb dry, and set it in a large roasting pan.

3) In a small bowl, mix together cumin, coriander, cayenne pepper and salt. Add olive oil, and stir until the mixture forms a paste with the texture of wet sand. Rub the spice paste on all sides of the lamb.

4) Add the dates to the pan, tucking a couple under the lamb. Then pour the beer and stock (or water) into the pan; avoid pouring them over the lamb itself.

5) Transfer the lamb to the oven, and cook, uncovered, for 20 minutes.

6) Reduce the heat to 400 degrees, and continue cooking for 30 to 50 minutes more, until lamb registers an internal temperature of 135–140 for medium-rare, 140–145 for medium. Check the bottom of the pan periodically; if it looks dry, add ½ cup of water to the pan, taking care not to pour the water over the lamb itself. When the lamb is done, set the pan on a heatproof counter to rest for 10 minutes; its internal temperature will continue to rise as it sits. Meanwhile, transfer dates to a serving platter.

7) If there is very little cooking liquid remaining in the pan, add a bit of water or stock and cook over medium heat for about 5 minutes to make a very thin juice for serving. If the liquid is plentiful, reduce it a bit, again over medium heat, to concentrate its flavors.

8) Serve the lamb, with dates and cooking liquid, over rice or smashed sweet potatoes.