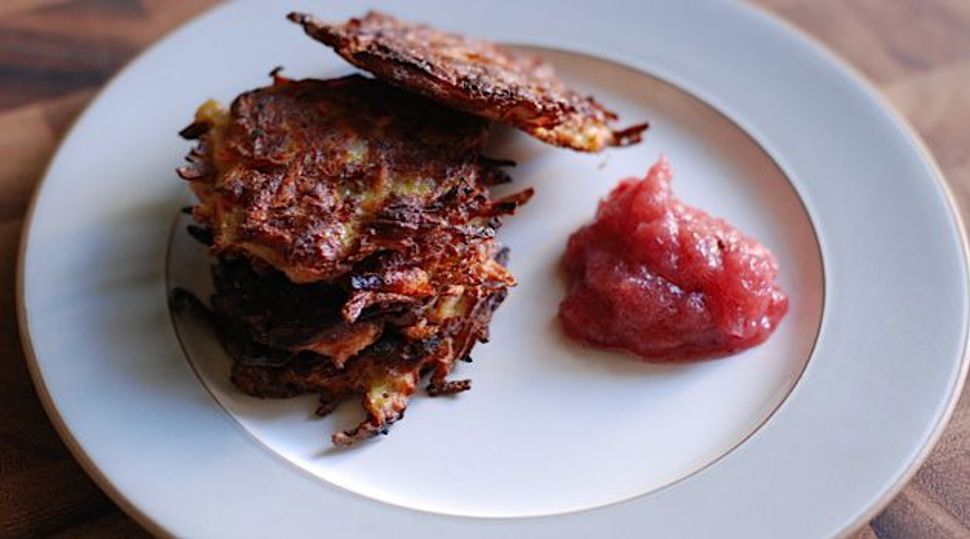 By now, surely you’ve heard the news: Thanksgiving and the first day of Hanukkah are one and the same. Once in a lifetime doesn’t quite capture the specialness of this event: Thanksgivukkah happens only once every 79,000 years. To those of us who love to cook, that means one thing: We better make this meal unforgettable.

I briefly dreamed of one monster dish — a sandwich of latkes, cranberry applesauce, roasted turkey and gravy, piled high and eaten with plenty of napkins. But Thanksgiving is a time for refined fare; we’ll save the Thanksgivukkah sandwich for Black Friday.

When I heard about the holiday, I knew immediately that no matter what else graced my Thanksgivukkah table, there would be latkes fried in turkey schmaltz — a smokier, richer version of the original. I knew I wanted to mix potatoes and sweet potatoes and to top the fritters with a lightly tart cranberry applesauce to help cut through those rich latkes and all that turkey. I also knew I wanted to try my hand at a new turkey recipe.

Most Thanksgiving meals feature a whole bird as the piece de resistance, but recent kitchen wisdom suggests that cooking the bird in separate parts produces better results, since the leg cooks slower than the breast. The other great appeal of cooking the turkey in pieces is that it allows home cooks to make something previously relegated to those willing to cook Thanksgiving dinner in a flame-resistant body suit: deep-fried turkey.

Whole, deep-fried turkey is not only challenging, it’s dangerous, too. Most do-it-yourself turkey-fryer kits include long gloves, and some even include goggles. That’s the definition of “Don’t try this at home.” But if you’re willing to cut up the turkey, the legs are very manageable to fry, and much less scary. I can think of no better way to commemorate the oil lasting for eight nights than to take way more than eight nights’ worth of oil and crisp up a few drumsticks for dinner.

The result is a perfectly and evenly cooked piece of meat that is ultra-tender and juicy. On turkey day I will carve the big pieces and serve them topped with homemade dulce de batata, an Argentinian sweet potato jam, and then pull the remaining smaller pieces and pile them onto those latkes, top them with cranberry applesauce and serve the result as an open-faced sandwich. To counter all that rich fare, I’ll also be serving green beans with horseradish vinaigrette, sharp enough to counterbalance a plate full of rich, smoky, sweet Thanksgivukkah classics.

The skin on deep-fried turkey gets crisped up and almost chip-like. It’s reason alone to try this recipe. But many Southerners swear by day-old fried chicken straight from the fridge, so deep-fried turkey leg may actually improve with age.

Rivka Friedman is a writer living in Washington D.C. She blogs at www.notderbypie.com.