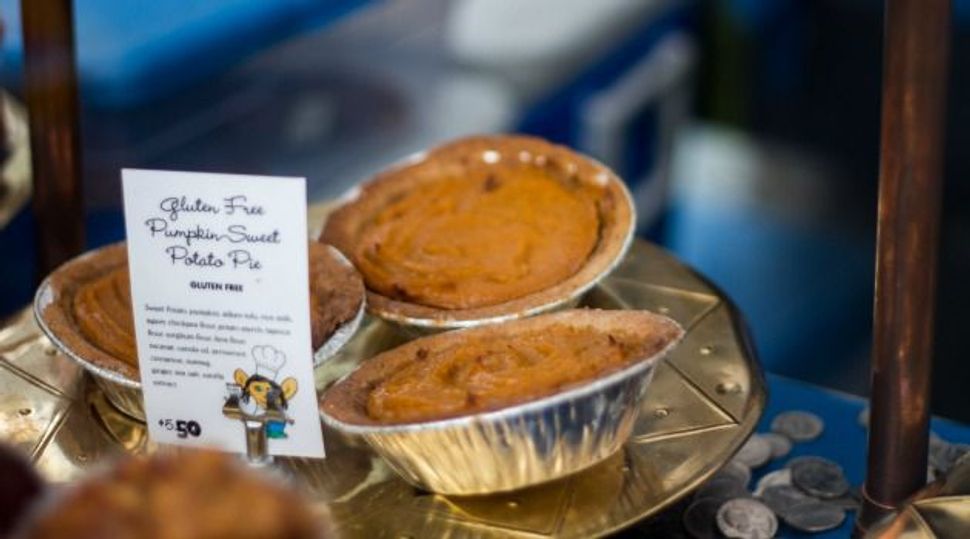 The once-in-a-79,000-years superfeast of Thanksgivukkah is upon us, which can only mean many of us will be shopping for all the best and freshest stuff. With Thanksgiving already being a day to thank for the harvest, acquiring your pumpkins and turkey at your local farmers market only seems logical. The Pilgrims certainly didn’t import their apples from Chile or South Africa!

There are convincing historical arguments to invest in local produce for Hanukkah, too.

Sydney Davis, who works at the stall of the Mountain Sweet Berry Farm in Roscoe, N.Y., at the Union Square Greenmarket, compared the Farmers Markets’ fight against cheaper supermarket chains to fighting the Romans.

“We’re the little guys, like the Maccabees,” he said. “We make it last despite all odds.”

Turns out Rick Bishops, the farmer at Mountain Sweet Berry, has been contributing his part to the Maccabees’ ongoing popularity: From his farm in the Catskills, he sells a large variety of potatoes, and recommends German Butterballs ($3/lb) for latkes.

If you’re wondering what to put on your latkes, Jeanne Hodesh, communications associate at GrowNYC, a non-profit that oversees the 64 Greenmarket and Youthmarket Farmers Markets that are operating in New York City this season, offers some suggestions.

“Whether it’s horseradish or cranberries you’re looking for, the market has [it] – as well as a cranberry horseradish chutney from Beth’s Farm Kitchen,” she said. “We think it would be delicious on latkes.”