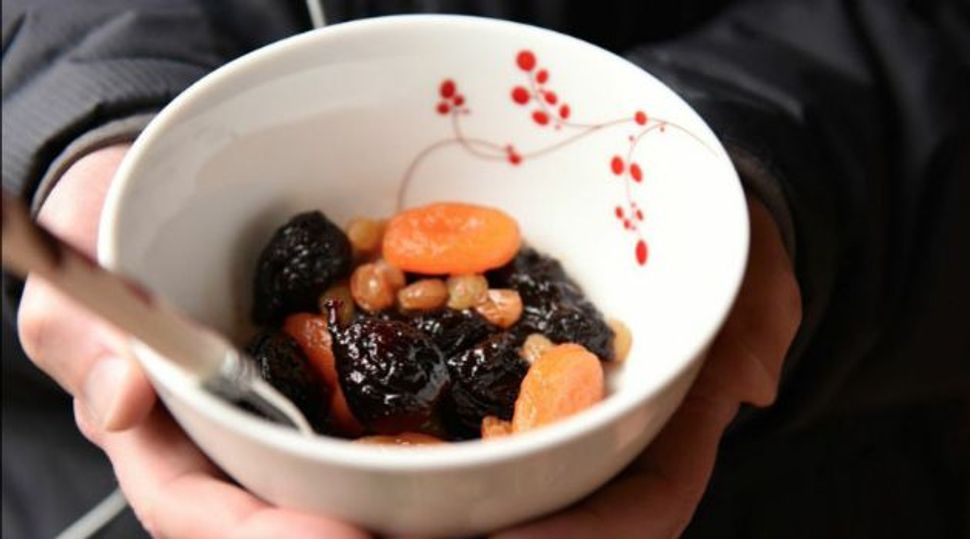 Dried fruit is often incorporated into the Tu B’Shvat seder to reference the seven fruits of Israel. Photograph by Shulie Madnick.

This year for Tu B’Shvat I’ll be making a dried fruit compote. The Tu-B’Shvat seder custom was created in Safed in the 17th century. Prayers over the seven species — wheat, barley, grape, fig, pomegranate, olive and dates — are recited. In the Diaspora, where fresh bounty of these species wasn’t available, especially centuries ago, the prayers were recited over dried fruits. The custom of praying over dried fruit is now also practiced by many in Israel.

The dried fruit compote is Turkish-inspired, but adapted by many Greeks, especially in Saloniki and the northern region of Macedonia. It is also very popular in many Jewish communities worldwide, often poached in wine instead of simple syrup.

2) Place the apricots and raisins with the water into a small sauce pan with half the spices, honey and lemon juice. Bring to a boil and immediately reduce heat to a simmer and cook for 10-15 minutes.

3) Repeat with the dried figs and prunes in a separate small sauce pan. (If you don’t mind the dark colors bleeding into the light colors, you can cook all the dried fruit together.)

4) Let the compote cool completely and only then discard the spices. Combine all dried fruit together and serve as is or with a dabble of Greek yogurt, a scoop of ice cream and/or whipped cream for dessert if you like.

1) You can add nuts such as almonds to the mix. We have tree-nuts allergies, so I steered away from nuts.

2) You can soak the dried fruit in wine instead of water and adjust the amount of honey according to taste/or use sugar instead.

3) You can place the spices in a cheesecloth or spice sash or pouch when cooking. This makes it easier to discard the spices at the end.

Shulie Madnick is a food and travel writer and photographer and the author of the blog FoodWanderings.com. She is an Indian Israeli now living just outside DC. Follow her on Twitter @foodwanderings.