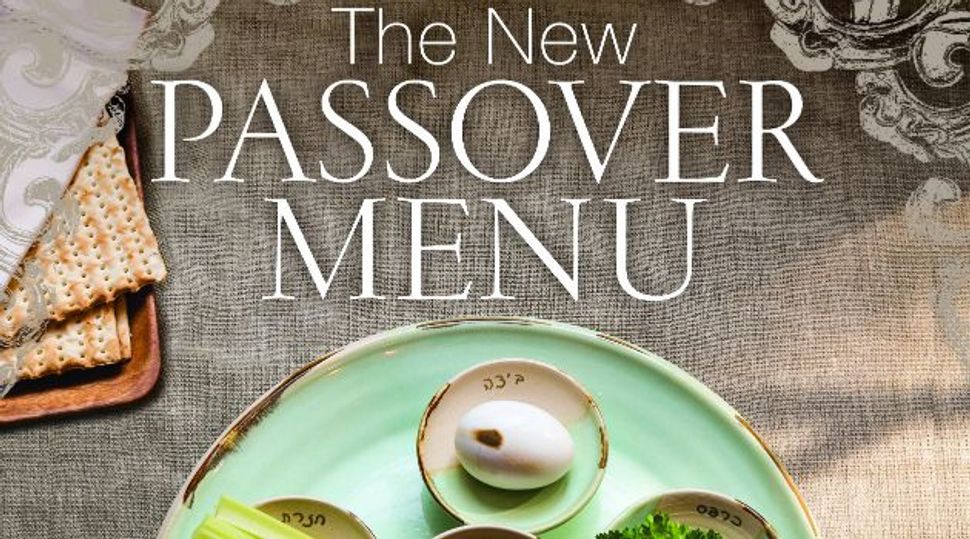 “‘The New Passover Menu’ has arrived in order to set you free,” Paula Shoyer tells readers in the introduction of her newest cookbook, published by Sterling Epicure. That promise, from the author of “The Holiday Kosher Baker,” intrigued me. From what would we be liberated? What I found was that the assortment of recipes in this book allows for two types of culinary freedom. For one, many of the dishes require everyday ingredients and are easy to prepare. This is a blessing for those who tend to get stressed out about how much time it takes to pull together a Passover Seder.

The second way the book offers liberation is through the absence of any recipes one might consider traditional for Passover. Instead, it offers creative variations on dishes like kugel, chicken soup and charoset. The kugel is asparagus, zucchini and leeks and the chicken soup includes chicken meatballs and zucchini spaghetti.

The book also highlights many international flavors. Two of the eight menus are inspired by French and Italian cuisine, and the Italian menu is vegetarian. It includes a recipe for potato gnocchi with pink sauce and one for eggplant Parmesan. Shoyer’s “International Seder Menu” represents the Middle East and Africa, with dishes including Moroccan spiced short ribs and chicken with dried-fruit stuffing.

It seems that Shoyer was inspired to create a modern, innovative approach to food. Take, for example, the first section: “Updated Ashkenazic Seder Menu.” The first recipe is a banana charoset, which sounded so strange to me that I had to try it. Whenever Passover rolls around, I find myself feeling bad for charoset, the sweet “mortar” that no one ever seems to be excited to eat (or make). After tasting Shoyer’s banana version, I couldn’t imagine why anyone would want to continue making charoset the traditional way. The natural sugars from the bananas provide the perfect amount of sweetness; you need a minimal amount of sugar and sweet kosher wine to round out the dish. I would certainly make this as a dessert any time of year. The Ashkenazi menu also includes fresh salmon gefilte fish loaf with arugula; avocado and mango slaw; matzo ball variations, and sweet potato tzimmes.

“The New Passover Menu” caters to people with dietary restrictions, which is great for a health-conscious pescatarian like myself. The Sephardic poached fish in red pepper sauce is incredibly easy to make, and it was very good. The recipe calls for any white fish or salmon, and I used tilapia. But if I were to make it again, I would use a more flavorful fish, and also increase the amount of salt.

For a side dish, I made the quinoa recipe found within the “Easy Chicken Menu.” Flavored with honey, cumin and cinnamon, it was an excellent complement to the fish, which contained a similar spice combination, reminiscent of the flavors of Morocco. In her introduction, Shoyer mentions that her book is divided in such a way as to streamline holiday planning. In addition to the two Seder menus, there are menus for a dinner that falls on the Sabbath — including a “Seder-plate salad,” which incorporates elements from the ritual plate, and smothered chicken with wine and herbs — and Yom Tov, which features a beet and butternut-squash salad and spaghetti-squash fritters. Really, any of the recipes can be made for lunch and dinner throughout the duration of the holiday.

“You can follow the menus as they are, or mix and match them as you like,” Shoyer said. I chose the latter, with great success. I plan on making the banana charoset again for my own Seder, and I’m looking forward to the holiday even more because of it.

Jean Hanks is the food intern of the Forward.