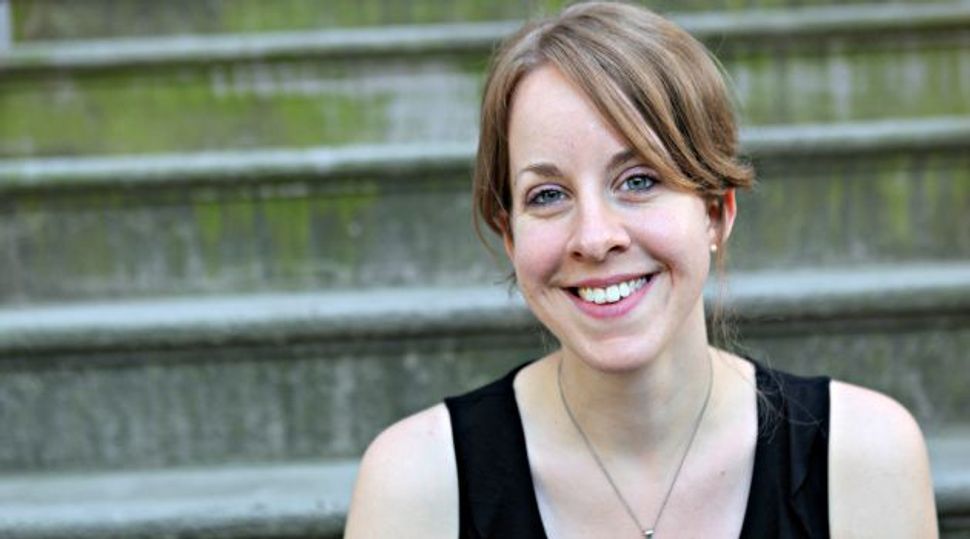 In her new cookbook, “Modern Jewish Cooking,” Leah Koenig keeps one foot planted in the traditional Jewish canon while confidently guiding her reader into new territory — a place where seasonality, inter-cultural fusion and creativity reign. Like an abstact painter who learned the rules of classical drawing and painting before breaking them all, Koenig, a Forward writer and contributing editor, came to this cookbook project with a deep understanding of classic Jewish foods, but chose to push the boundaries of the cuisine in a way that’s entirely fresh.

In a recent conversation, Koenig told me, “We are sort of a DIY and playlist-shuffle generation, where we have all the building blocks but we like to play around with things, bring in other cultures; global influences.”

Koenig said that she put each recipe in the book through a kind of a test, asking herself, “Would my grandmother recognize this? And would my 21-year-old cousin also think it was interesting? If the dish achieves both,” she said, “then it’s good to go.”

Our conversation about “Modern Jewish Cooking” follows, along with a couple of matzo-based recipes from the book to get you through the final days of Passover…

In the book’s introduction you explain that you didn’t have a bubbe to stand next to in the kitchen, someone who would pass down the family’s favorite recipes, and that while that was regrettable, it also led to something great. Can you talk about that?

I would have loved to have met my grandmother and great-grandmother, and I hear all these stories about what a great cook my grandmother was, she had that bubbe charm of using a glass as a measuring cup. I didn’t have that, so when it was time for me to make these foods as an adult, I had to really strike out on my own a little bit.

I should give my mom credit, because she also really valued cooking and good food and I got that from her from a young age, but I wasn’t interested in food as a kid — I kind of took it for granted that it was there. When I got interested I could call her, but I’d kind of missed those formative years when you’re half playing by yourself and half watching your mom frying up a batch of latkes.

So it became clear to me that I really wanted to learn how to make these foods and I was fortunate that the internet was out there — this was 2003, 2004 — the internet wasn’t as advanced — the cream hadn’t risen to the top yet. Now you know who you can trust, which blogs to read, but back then it was a free for all. I got a lot of bad recipes off the web. There were also cookbooks, of course, but there was a lot of trial and error. It was really fun, and it continued after college. I would cook a lot with my friends. My friend Avi had a Shavuot party where we fried blintzes, and we realized that not one of us had done it before. They weren’t the best blintzes in the world, but they were ours, they were fun and delicious.

So I learned to cook these foods by doing it myself and with friends, and in doing so you kind of put your own spin on things. I wasn’t bound to the shackles of how my grandmother had done it. There was a lot of freedom that was very enticing to me. 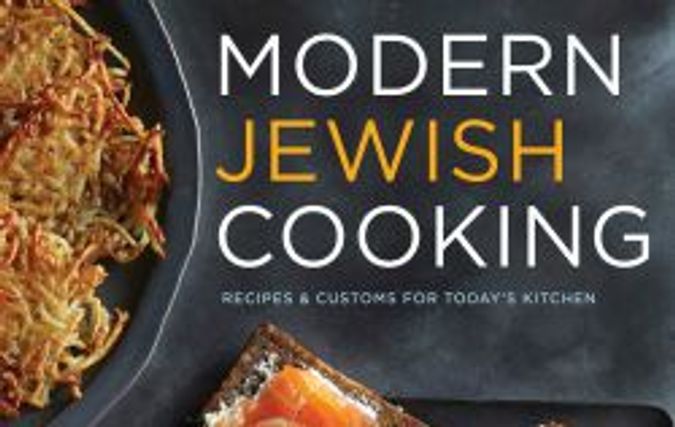 Can you talk about how it freed you up to create your own modern approach to Jewish cooking?

I think it’s a few things. One is, we are sort of a DIY and playlist-shuffle generation, where we have all the building blocks but we like to play around with things, bring in other cultures; global influences. For example, the matzo balls themselves are basically just matzo balls; they’re something that your grandmother would recognize. But with the addition of jalapeños and shallots, you get something that’s very special, that nods to a much wider and more global palate.

Also the whole seasonality, farmer’s market, local ethos that we have is such a big part of my generation’s ethos, it’s a given at this point, but 10 or 15 years ago it wasn’t. It’s where we are as a culture are at, and also it’s important to me that I’m eating squash in the fall and strawberries in the summer, and I think the recipes really reflect that. The Jewish holidays, if you think about it, it’s seasonal. Latkes are potatoes and apples because that’s what they had in storage in the winter. It’s no surprise that pomegranates are a Rosh Hashanah food, because in addition to their symbolism, they come into perfect juicy ripe season in the fall. And apples come into season right at Rosh Hashanah time. Passover, you’re having lamb, lamb is a spring food, parsley is a spring herb.

So seasonality is embedded in our tradition, we just never really think of that.

In the forward of your book, Gabriella Gershenon says that this is the best moment in modern history to rediscover Jewish food. Why?

On the one hand I think it’s always the right time to discover it, so I shy away from identifying with that too much, but we’re just in this wonderful moment where people want tradition, to connect back to their heritage, whether European or Sephardic or Mizrahi, Middle Eastern, they want to mine the richness that their ancestors gave them, but they also have global access, through the Internet. When you put those two things together there’s this alchemy that creates exciting food. The folks from Mile End and Fat Pasha in Toronto are really taking traditional Jewish food to new places. For the record, I think that happens in every generation, I don’t think we’re the first to say, let’s make it relevant to us, but we have so many more resources, more interconnectedness at our disposal. It’s really exciting.

What would you say is the balance between traditional and modern in the book? What were you aiming for?

So this book is really for a few different types of people. It’s for people like me who ate Jewish foods growing up but didn’t cook them, and it’s also a reference book. I want to make basic apricot hamantaschen, basic chicken soup. I wanted to make sure that that stuff was covered. Everything I do, no matter how much it risks, I want it to be noticeably bound to tradition. You can go so far as to lose that anchor, and then where are you? I also wanted it to be for people who are maybe marrying into a Jewish home and want to learn how to cook those foods. And the third group is for people who just like the flavors of Jewish cuisine.

I kind of put it through the test of would my grandmother recognize this, and would my 21-year-old cousin also think it was interesting. If the dish achieves both, then it’s good to go.

I don’t necessarily think Jewish food has to be kosher. In a traditional sense I think there’s a rich Jewish cultural food tradition that’s not necessarily bound in kashrut. But I do think you can cross the line. I try to stay with one foot in each world a little bit.

You put some information about each holiday in the back of the book along with all the suggested menus. What was the thinking behind that?

When I was putting the skeleton of the book together, my first instinct was to have holiday chapters, so the holiday recipes would be put together. Then I realized that that wasn’t the right approach, because if you’re not Jewish, you might know that apples and honey are for Rosh Hashanah, but you might not know that hamantaschen are for Purim. I don’t want anyone to feel lost. So the holiday chapters were my place to tie it all together. I created these menus that cull from the book and say, if you were creating a traditional Purim meal or Passover meal, here are the things you might want. Hopefully it’s a more fun way than saying, ‘You have to eat these foods.’ I wanted to make it as accessible as possible while giving the information for people who were looking for it.

I wanted this book to really be a snapshot of who the Jewish community is today. In this country we sometime forget that there are Sephardic or Middle Eastern Jews that have their food traditions that are similar but unique. But Yotam Ottolenghi and people like that are really changing that for the better. I wanted to make sure the menus represented both an Ashkenazi and a Sephardic outlook. And there are a lot of Jews who are vegetarian, which can be really hard. (I was a vegetarian for just under 10 years.)

Eastern European cuisine is very meat heavy, so I wanted to make sure that for those people who are crafting a menu for themselves, that this book could speak to them. And you don’t necessarily need meat to have a festive Shabbat dinner, though people think it’s not true. I had plenty of festive Shabbat meals when I was a vegetarian.

What are your favorite Passover dishes in the book?

Passover, we go to my in-laws, so my mother-in-law does a lot of the cooking and I’m pretty happy to just be a guest, but I always try to bring something. Not for the Seder but for lunch, I brought a matzo and spinach lasagne from the book last year, and it was a smash hit. It’s really different. You can hardly tell that it’s not noodles. It’s a delicious dish.

And also I often make the matzo granola for them, which we eat and snack on the whole time we’re there. I didn’t come up with matzo granola but the one in the book is really, really good. Breakfast is hard at Passover. Having this granola around is really sort of a lifesaver.

** What was the coolest thing about doing this project?**

I think it was that it felt like an autobiography a little bit. It’s obviously not one in any way, shape or form, but it felt like I was given the opportunity to share how I live and cook and eat.