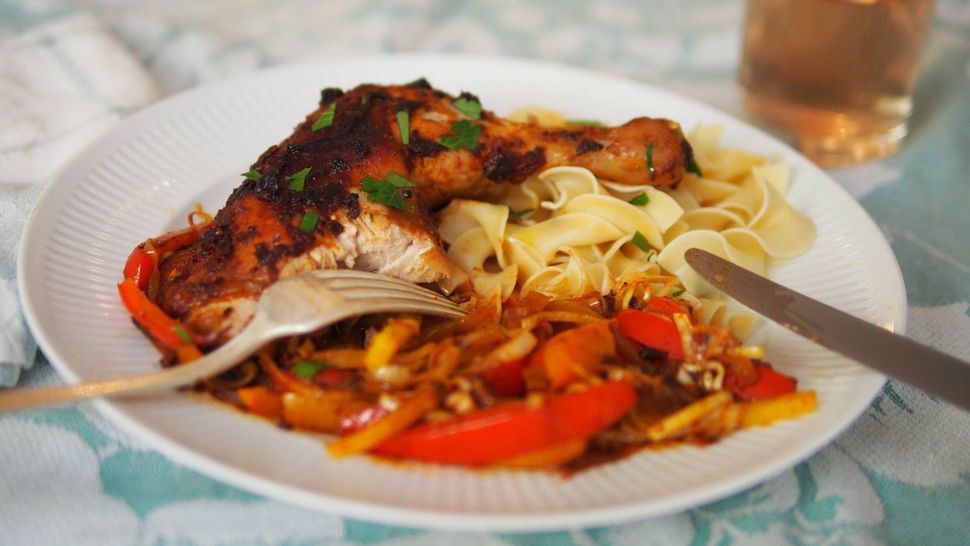 I had a beautiful Hungarian grandmother, born Erzsébet Weisz and redubbed Elizabeth Weiss when she and her parents and brother and sister moved to New York from Miskolcz in the 1920s. I called her Nana and she called me darling. (It sounded like dahhrrlink, as if spoken by a brainiac Zsa Zsa Gabor.) Nana said her Ws like Vs and her Vs like Ws, so as she told it, proudly, I vent to Wassar. She had gone to another of the seven sisters, Barnard, where she graduated Phi Beta Kappa in 1926, a brand new immigrant who had enrolled only two years earlier, no less. She went on to get a Master’s at Columbia; then taught at Hunter College and later — after being denied tenure for marrying my grandfather — at Horace Mann. She spoke five languages, had perfect skin, and made splendid baby lamb chops and a mean chicken-in-the-pot.

One day, when I was in my early 20s, she taught me how to make palacsinten, the Hungarian version of crêpes, which she filled with either apricot jam or a cottage cheese and raisin mixture, both delicious.

I don’t remember her making paprikash, though I do recall eating it one night at a family dinner — maybe it was her birthday — at a Hungarian restaurant, Mocca, which used to be on the Upper East Side.

When I came across the recipe for roasted chicken paprikash in JCC Manhattan’s “The Community Table: Recipes & Stories From the Jewish Community Center & Beyond,” I was compelled to try it. It tapped a deep well of nostalgia, obviously, but at the same time the dish seemed modern and fresh. I liked that the chicken was roasted, and that I had all the ingredients on hand — the whole thing is really very straightforward. (I happened to have leeks in the fridge, but if I hadn’t I would have substituted onions or shallots rather than running out for them.)

The dish turned out to be more than just a blast from the past — it was deeply flavorful, smoky, earthy and satisfying. The paprika flavor is very strong, but both my kids devoured everything on their plates.

What I like so much about “The Community Table” is that it manages — like Leah Koenig’s “Modern Jewish Cooking” — to maintain clear ties to the classics while feeling firmly placed here in the present. Hungarian though I may (at least partially) be, I didn’t have a go-to paprikash recipe before. I’m pleased to say that I have one now.