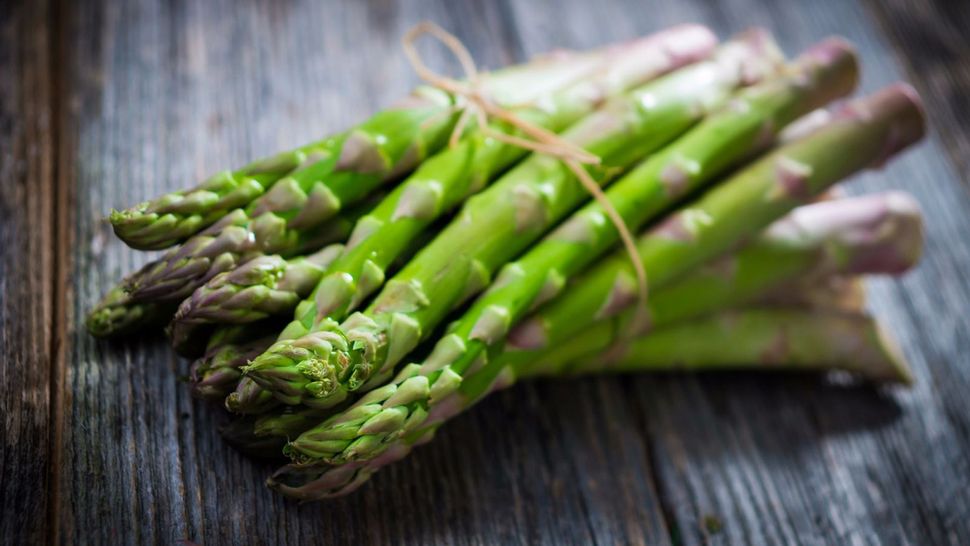 On April 27 I picked the first asparagus of the season. It was tender and it was sweet. Even more important, it was the sign that spring had finally arrived in my town of Worcester, Massachusetts, whose bragging rights include being named more than once the snowiest city in the U.S.

There is nothing quite so delicious as asparagus fresh from the garden. It’s far superior to the bundles sold in supermarkets, and not even in the same universe as that mushy, olive-green stuff in cans. You can eat it raw or just slightly steamed, marinated for a cold salad or incorporated into any number of recipes.

But, fair warning: The asparagus season is short. Very short. If you can get three weeks of the veggie from your garden, you are doing well. After that, you’re dependent on the green grocer.

Asparagus is native to the eastern Mediterranean and Asia Minor areas, and yet Israelis are just recently beginning to incorporate it into their cuisine.

The plant itself is a cousin to onions, garlic and leeks, as well as to flowering bulbous plants. The ancient Greeks and Romans adopted the name from the Farsi asparag, or “shoot.” The vegetable has also gone by the name sperage, sparagus, and “sparrow grass.”

Although the Greeks loved their wild asparagus and believed it to have medicinal qualities, it was the Romans who first cultivated it over 2,000 years ago. They must have planted a lot of the vegetable because what they didn’t eat fresh, they preserved for winter. Roman emperors were so fond of asparagus, in fact, that beginning with Augustus they kept a fleet of ships called the “Asparagus Fleet,” which sailed throughout the Roman Empire, specifically for the purpose of obtaining it. Runners and chariots were then employed to carry fresh spears to the Alps, where it was frozen for later use in the Feast of Epicurus.

Legend has it that Egyptians revered asparagus so much that they offered it up to their gods, and the vegetable appears on a frieze picturing the ritual, dating back to 3000 BC.

Muḥammad ibn Muḥammad al-Nafzawi, writing in Tunis in the 12th century, attributed aphrodisiacal properties to asparagus in his book, “The Perfumed Garden of Sensual Delights,” what many call the Arabic version of the “Kama Sutra.”

Asparagus has been called variously the “food of kings,” “the king of foods,” and “food of the gods,” and for good reason. Due to is very short growing season, it was for centuries a rare delicacy that only the wealthy could afford. King Louis XIV of 17th-century France was so fond of asparagus that it is reported he ordered special greenhouses built so he could enjoy it all year round. French monks, meanwhile, had been cultivating asparagus since the 15th century.

Legend has it that in 1790, the Dutch Consul to New England, one Deiderick Leetouwer, missed his beloved asparagus so much that he had roots sent to him from the Netherlands. He planted them near his home in West Brookfield, Massachusetts. Some locals claim to have the original patch.

America came a little late to the game, not growing asparagus in any real quantities until the mid-19th century. But it has since become as closely associated with spring in the U.S. as old Robin Red Breast. Once we got involved, we were all in. The crop is so economically significant in some parts of this country that festivals to honor it — at least one complete with parade and asparagus queen — are held every year.

Many German cities host Spargelfests to celebrate the harvest of white asparagus. One of the highlights of the spring season is the performance of “Veronika, Spring is Here,” originally sung by The Comedian Harmonists, a pre-World War I group of German singers founded by Jews. Asparagus being shaped the way it is, at the time it was written the song was considered a rather racy tribute to the vegetable. Once the 1930s rolled in, the group disbanded and fled the country. 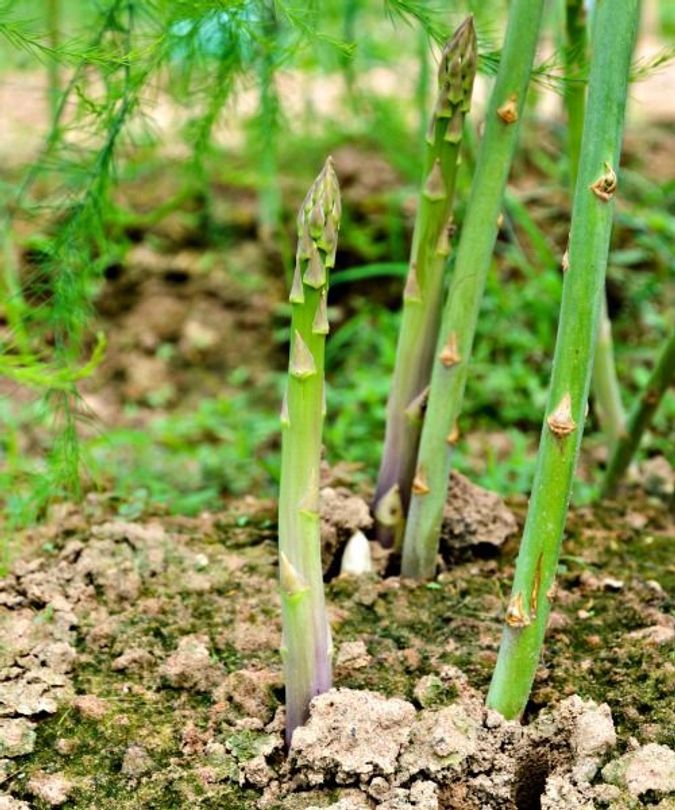 Now if, upon reading this post, you decide that you want to grow your own, I have good news. Asparagus is a long-lived perennial plant so you will get about 20 to 25 years out of it. And maintenance is easy. Simply fertilize with 10-10-10 before the spears appear in early spring and after the last harvest. Then let the ferns grow until they turn brown after frost, at which point you should cut them down. Make sure to keep the area free of weeds. That’s it!

Once the asparagus is established, usually in its second year after planting, although some gardeners say the third year, you can begin to enjoy the delectable spears. To harvest, cut them on an angle close to the ground when they reach a height of about eight inches and are thicker than a pencil.

A Simple and Delicious Way to Cook Asparagus

The legendary general and statesman Julius Caesar is reputed to have had his first taste of asparagus in Lombardy, in what is now northern Italy. He then ordered it served with melted butter. Boy, was he onto something. When it comes to asparagus preparation, the simpler the better. In fact, I can eat it raw with nothing else added, straight from the garden. But, if you are in the mood for something a little fancier, with no real work involved, try this recipe.

2) Rinse the asparagus under cool water to remove grit, and dry thoroughly. Break off the tough ends of the spears.

3) Place the asparagus into a mixing bowl (or plastic bag) and pour in the olive oil. Toss (or shake) to coat the spears.

4) Place the asparagus on a baking sheet and sprinkle with the salt, pepper and cheese. Roast for 25 minutes, until tender but still crisp. Sprinkle with lemon juice and serve.