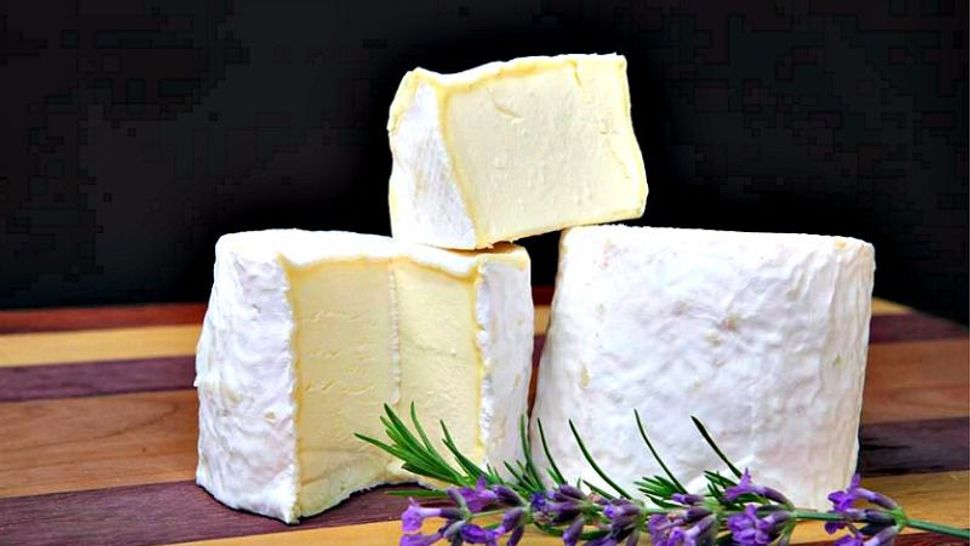 Ancient legend has it that an Arab merchant living some 4,000 years ago put his supply of milk into a pouch made from a sheep’s stomach as he set out on a journey across the desert. The rennet in the lining of the pouch, combined with the heat of the sun and the bouncing of the camel onto which the bag was tied, caused the milk to separate into curds and whey. After his long day of traveling, he was hungry and thirsty, and he was delighted to find that the whey satisfied his thirst, and the delicious curd — what we call cheese — satisfied his hunger.

Israel was so active in cheese making that the historian Josephus wrote that the ravine separating Mount Moriah from Mount Zion in Jerusalem was called the “Valley of the Cheese Makers.”

Unfortunately, cheese culture in the holy city, or in Israel in general, didn’t quite live up to its ancient title for many years. When I lived in Jerusalem, the corner makolet sold “yellow cheese” and “white cheese.” Aside from the totally uninspired names, those cheeses didn’t have much flavor. There were only a handful of other varieties available, including bulgarit, a feta-like cheese, and of course, labneh, a staple on every mezze platter. Tzefatit, a salty sheep’s milk cheese, was the only one that could lay claim to historical authenticity, having been produced in the ancient northern city of Tzefat for centuries.

Happily, the Valley of the Cheeses has evolved into the Nation of the Cheeses as small boutique dairies have revitalized the industry with quality cheeses made from cow, goat and sheep’s milk.

Cheese has become so much a part of the Israeli diet that it was the subject of the great Cottage Cheese Boycott, a consumer-led protest against the continuing rise of food prices in the country. The boycott had its genesis in a governmental decision made in 2008. Because one particular dairy cooperative, Tnuva, controls more than 70% of the market, it is considered by Israeli law to be a monopoly. Therefore, the Antitrust Authority has the power to regulate prices to prevent price gouging. However, working on the theory that deregulation would foster competition and thereby reduce prices, the then Finance Minister, Avraham Hirschson, decided that the government should stop regulating the price of cottage cheese. Unfortunately, just the opposite happened, and prices increased almost 50%. Hence, the boycott.

Organizers urged people to stop buying cottage cheese. Within a short time, 100,000 users signed onto the protest on Facebook. As the protest gained followers, it sparked a public debate over the high cost of living in Israel, and led ultimately to a drop in price.

A lifelong cheese aficionado, I have long been fascinated by the process of making different cheeses from varying proportions of the same basic ingredients: milk and cream. And, while I have actually made goat cheese and labneh in my own kitchen (both super easy to do), the really interesting stuff requires a degree in food science. So, on a beautiful and sunny Sunday afternoon, when I had the unique opportunity to meet an actual professional cheese maker, I jumped at it.

Middlebury Vermont’s Champlain Valley Creamery and its owner Carleton Yoder fit the Vermont image to a tee. Not only does Yoder produce his cheeses in a net-zero solar-powered building, but even the waste doesn’t go to waste. For example, he gives all the whey from queso fresco production to a local farmer to use as animal feed. The gift, while generous, helps the creamery avoid the cost of disposal. 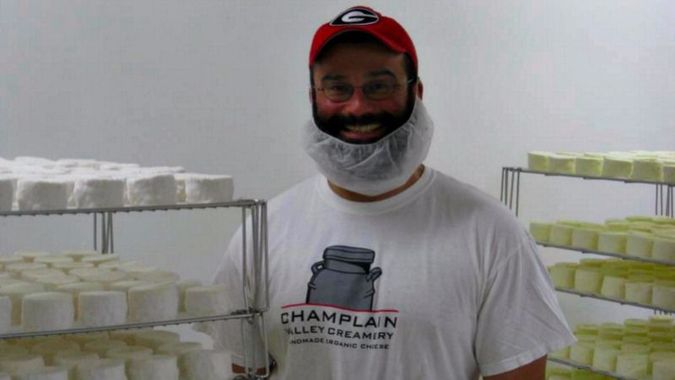 Yoder originally trained as an electrical engineer, but changed his focus while in graduate school at Virginia Tech. “The group (in food science) was much smaller and friendlier,” he said, explaining the switch. “They had barbecues.” His first foray into food production after school was at a winery, followed by a stint at a hard-cider making facility in Vermont. In 2004, after a long search, he got involved with cheese. And, he was hooked on Vermont.

Cheese making is not a simpleton’s game. The bookshelves in Yoder’s office are lined with tomes on chemistry, microbiology and food science. His training as an engineer also came in handy when first starting out in the business. Self-financed by a home equity loan, he and his wife set up shop in their house, Yoder repurposed equipment and even rewired refrigerator thermostats to make his own “cave” for aging the cheese.

Yoder uses traditional techniques and small-batch pasteurization to produce his organic cheeses entirely by hand in a multi-step process. The first step is to find the basic ingredients. Yoder gets his organic milk from a single source, the herd at the Blissful Dairy in nearby Bridport. The dairy’s cross-bred Jersey/Holstein cows produce milk high in butterfat and solids. (An interesting factoid: The fat content of the milk varies by season. Summer is the leanest time of year, so less cream results from the separation stage.)

He then hauls the milk in traditional 10-gallon cans from the farm back to the creamery for immediate processing. He likes to say, “It’s 25 minutes from cow to cheese.”

Yoder, or one of his five part-time employees, then empties 80 gallons of raw milk into a pasteurizing tank that is heated around the perimeter.

“Most of our cheeses are fresh and short-aged, so they need to be pasteurized by FDA rules,” Yoder said. “We use the old ‘low and slow’ method of batch, or vat, pasteurization.”

Next stop in the process is the 1950s-era DeLaval 618 cream separator that turns raw whole milk into cream and skim milk. The cream is added to whole milk to produce both Organic Champlain Triple and Old Fashioned Organic Cream Cheese, the company’s two original product lines. The skim portion is saved to be used in more recent additions, Queso Fresco and Queso Añejo.

The cream cheese, winner of the 2004 American Cheese Society Silver Medal, is made with cow’s milk and cream. It is drained overnight in cloth bags, and then salted, packed and ready for sale the next day.

The Organic Champlain Triple, winner of the 2007 American Cheese Society Silver Medal, takes longer to produce. Made from cultured whole milk and cream, it is hand-ladled into forms and then left to sit on large racks set on tables fitted with a drain that siphons off the whey. This draining and salting step takes several days and is followed by aging for another seven to ten days, during which the cheese develops its signature bloomy rind. It has a rich, creamy flavor reminiscent of brie, but with a thin rind that hints of mushroom.

The aging takes place in the “cave,” a cold room monitored by a hygrometer set at around 90% humidity and 54 degrees.

The cream cheese, Triple Cream, and the cleverly named Pyramid Scheme are lactic curd cheeses, which means that they are coagulated, or “set,” by the action of the bacterial cultures added to the milk that results in the formation of cheese curds and whey. These are the softer cheeses. (Think Little Miss Muffet.)

Queso Fresco and Añejo, on the other hand, are set by the action of microbial rennet, an enzyme that sets the cheese in 45 to 60 minutes. 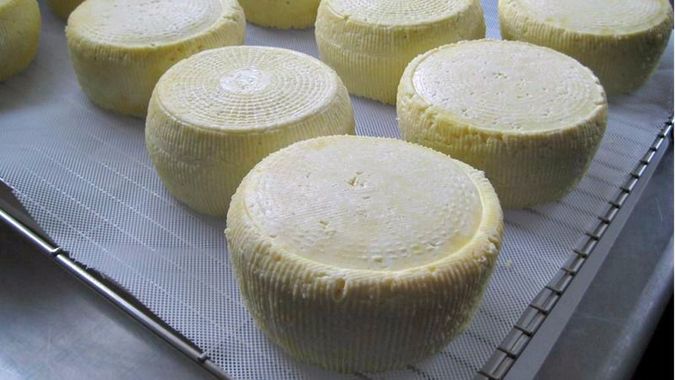 Champlain Valley Creamery’s Queso Fresco is made with cow’s milk.

The day I was there, my companions and I tasted three of Champlains’s five products: Organic Champlain Triple, Pyramid Scheme and Queso Fresco, and we came home with a bag full of goodies. The cream cheeses were both delicious and super creamy. The Queso Fresco was a bit salty for my taste when eaten out of hand, but was great as a pizza topping when the kids made a pie that night.

Now we get to the subject of cheese and kashrut. Not surprisingly, there is a great deal of debate and confusion over what makes a cheese kosher. Some rabbis say that if the source of the rennet is a kosher species of animal and ritually slaughtered under rabbinic supervision, that rennet may be used to turn milk into cheese. The fact that the rennet comes from an animal somehow doesn’t make it meat, which of course could not be combined with dairy. Other rabbis believe that animal-derived rennet has been so chemically altered that it no longer resembles the cow from which it came. Therefore, it is not considered a meat product. My own rabbi, citing the Conservative movement’s ruling, asserts that all domestic cheeses are kosher. Since the Champlain Valley Creamery’s cheeses are both domestic and made with microbial (aka vegetarian) rennet, I gladly partake.

1) In a stainless steel pot, slowly heat the milk on the stove until it reaches 180–185˚ F. Gentle bubbles should form and the surface will look foamy. Turn off the heat.

2) Stir in the lemon juice then let the milk sit for 10 minutes. The milk should curdle and become slightly thicker on the surface.

3) Line a colander with two layers of cheese cloth. Gently pour the milk into the cheese cloth then gather the cheesecloth up around the curds and tie it into a bundle using a rubber band.

4) Hang the bundle by a wooden spoon or ladle over a deep bowl or pot so the liquid can drip out.

5) Let the cheese drain for at least 1½ hours. Scrape the cheese into a bowl. Stir in salt and/or other herbs, spices or garlic to enhance the flavor.

6) Use your hands to pat and shape the cheese into a small wheel or log. The flavor and texture of the cheese usually improves a little bit if you refrigerate it for a few hours before serving

7) The goat cheese should stay fresh in the refrigerator for a week — if it hasn’t been gobbled up before that.