Pumpkin-Apple Challah and Other Breakfast Breads 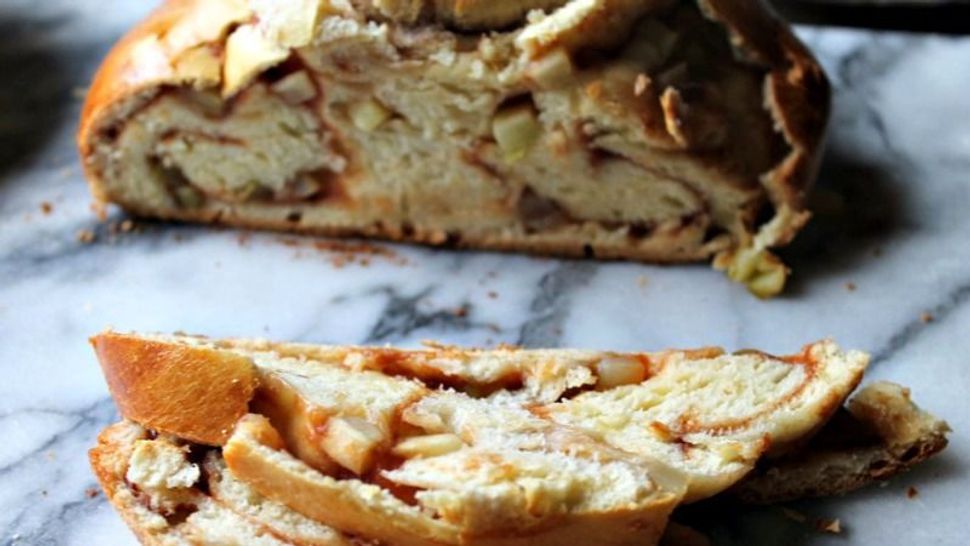 In addition to being a delightful, late-winter update to the Shabbat table, pumpkin-apple butter challah makes the best breakfast challah that ever was. It is divine toasted and slicked with soft butter, or tahini mixed with a little honey. It is lovely alongside fried eggs. And French toast? It’s a natural. Image by Sari Kamin

What is it about Jews and bread?

I can’t help but notice that virtually every time I read a bread-related story (and there are a lot of them lately), it involves a member of the Tribe.

Granted, I run in small circles and read fairly specific newspapers. But both of those biases aside, there are honest connections to be made between Jewish tradition and bread baking. After all, our tradition’s weekly holiday, Shabbat, is inextricably bound to challah’s bronzed and twisted loaves. And from Yemenite jachnun to Eastern European rye, nearly every Jewish culture comes complete with at least one bread to call its own.

Whether or not one maintains traditional ties with Jewish observance, this connection to bread lives somewhere deeply within Jewish DNA, I think. Our ancient ancestors pulled dense flat pitas out of the fire to break bread with. Our not-too-long-ago Eastern European ancestors spread schmaltz on dark brown bread and called it breakfast. And lunch and dinner, for that matter. We are the people of the book, yes, but also the people of floury hands and yeast-perfumed air.

One of my own favorite contributions to the world of bread is the pumpkin-apple challah I developed for “Modern Jewish Cooking.” The dough is enriched with pumpkin puree and enlivened with cinnamon and cardamom. After rising, it gets the babka treatment: The dough is rolled into a flat rectangle and spread with a thin layer of apple butter. A scattering of chopped apples is sprinkled on top of that; then the dough is spiraled into a snug jelly roll and coiled around itself to form a squat round. Cutting into a fresh loaf, you’re greeted with a downy crumb and ripples of fruit.

In addition to being a delightful, late-winter update to the Shabbat table, pumpkin-apple butter challah makes the best breakfast challah that ever was. It is divine toasted and slicked with soft butter, or tahini mixed with a little honey. It is lovely alongside fried eggs. And French toast? It’s a natural.

1) Stir together the yeast, 1 teaspoon of the sugar, and the warm water in a medium bowl. Let stand until foaming, 5–10 minutes.

2) Meanwhile, whisk together the remaining 1/3 cup sugar, flour, cinnamon, cardamom and salt in a large bowl.

3) Add the pumpkin, vegetable oil and 1 egg to the yeast mixture and whisk to combine. Make a well in the center of the flour mixture and pour in the wet mixture. Gently stir until the dough begins to form, then turn out the dough onto a floured surface and knead well, adding more flour, a little at a time, as necessary, until a supple dough forms, 8–12 minutes. Rub about 1 teaspoon oil around the bottom of a large bowl, add the dough, and turn to coat. Cover with plastic wrap or a dish towel and let sit in a warm place until nearly doubled in size, 1–1½ hours.

4) Line two 9-inch round cake pans with a circle of parchment paper and lightly grease the parchment; set aside. Gently deflate the dough with your hands by pressing it in the center and turning it out onto a flat surface and divide in half with a knife. Working with 1 piece of the dough (and keeping the other covered with a dish towel), use a rolling pin to roll it into a large rectangle, about 1/8-inch thick. Spread about half of the apple butter evenly over the top, and sprinkle with half of the apple. Starting at one of the long ends, tightly roll the dough in on itself, like a jelly roll. Pinch the ends to seal and gently stretch into a 24-inch-long rope. Coil the rope into a circle and place into one of the prepared pans, tucking the end underneath. Repeat with second piece of dough and the remaining apple butter and apple.

5) Whisk the remaining egg in a small bowl and brush the challahs with one coat of egg wash. (Put the remaining egg wash in the fridge). Cover the loaves loosely with lightly greased plastic wrap and let rise for another 30 minutes. Fifteen minutes before baking, preheat the oven to 375° F.

6) Uncover the loaves and brush with a second coat of egg wash. (Don’t skip the second coat; it adds deep beautiful color to the loaves.) Bake until deep golden brown and cooked through, or an instant-read thermometer stuck into the center of the loaf reads 195˚ F, 40–55 minutes. (The cooking time varies significantly depending on how thick the coil is. Start checking with your thermometer at 40 minutes, then every 5 minutes after, as necessary.) Remove from the oven and let cool on a wire rack. Serve warm or at room temperature. Challah is best the day it is made, but can be rewarmed in an oven or sliced and toasted for up to 3 days.

Pumpkin-Apple Challah and Other Breakfast Breads