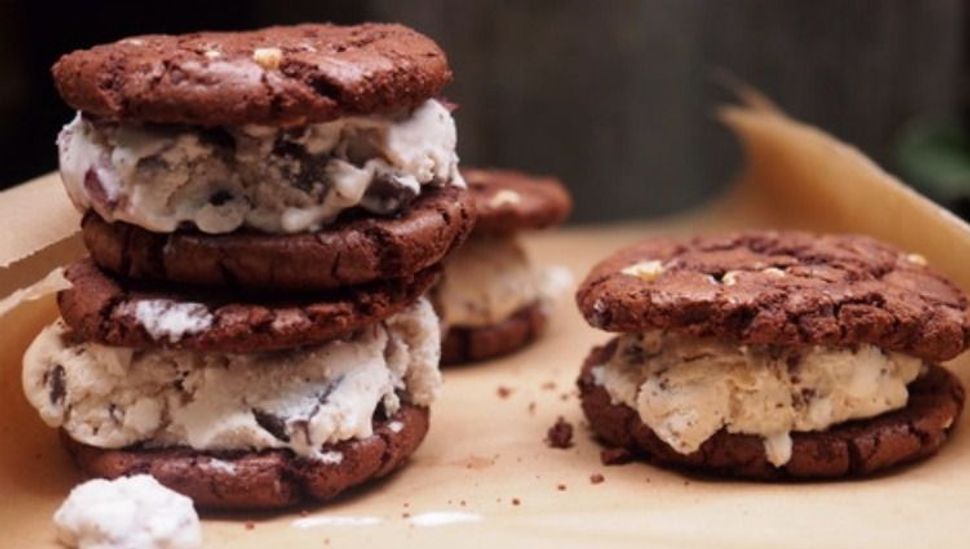 Homemade ice cream sandwiches are a delightful finale to a summer dinner. Image by Liza Schoenfein

My Cuisinart ice cream maker is over 20 years old, and I don’t think a summer’s gone by when I haven’t broken it out. It takes about a half an hour to turn a few basic ingredients into delectable homemade ice cream — hardly more time than it would take to pick up a pint at the local deli.

My most successful flavor combinations tend to be riffs on Ben & Jerry’s favorites: I do a banana with chocolate- and peanut-butter chips that’s my take on Chunky Monkey, and a fresh cherry and chocolate chunk version that gives Cherry Garcia a run for its money. That’s what I made these ice cream sandwiches with.

As a base, I used the no-cook vanilla ice cream recipe from the booklet that came with the machine. (Who wants to stand over the stove in the summer making custard, or wait for it to cool?) I just want to whisk together some cream, milk, sugar, and good vanilla, let it whirl, then add whatever flavor combinations I can dream up (fruit, chocolate, nuts, liqueur…) in the last few minutes.

Feel free to play, as long as you stick to the basic template below. I’m currently dreaming up a flavor with tahini and pistachio nuts, and another with tahini, nutella and hazelnuts — both inspired by halva I bought recently at Seed + Mill. (I’ll let you know how it goes and post the resulting recipes here soon.)

For optimal results, it’s good to let your ice cream harden up in the freezer before scooping it onto the cookies, but there’s nothing particularly wrong with a drippy homemade ice cream sandwich either, so if time is at a premium, don’t stress one bit.

I used Dancing Deer Baking Co. cookies that I bought at Whole Foods, but any good, relatively soft medium-to-large chocolate cookie will do. 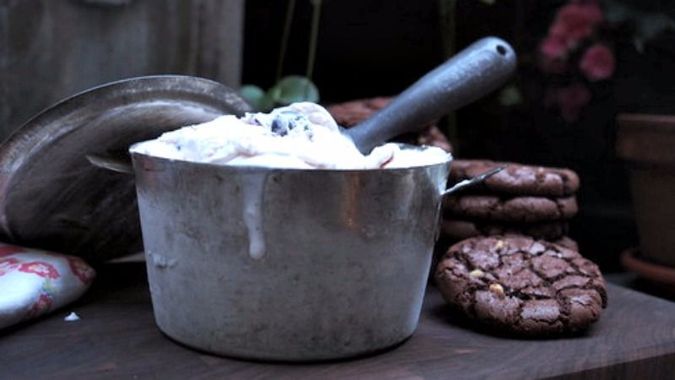 If you’re serving grownups, consider soaking the cherries briefly in ginger liqueur before adding them to the cream mixture. If you want the ginger flavor without the alcohol, mince one or two pieces of candied ginger and throw them in when you add the cherries and chocolate. I chopped up a bar of Green & Black’s organic dark chocolate for this recipe, but you can substitute your favorite chocolate chips if you like. And I used 2-percent milk here, but anything works.

1) In a medium bowl, whisk the cream, milk sugar, and vanilla. Add mixture to your ice cream maker and process according to the machine’s instructions.

2) Meanwhile, toss cherries with ginger liqueur, if using, and set aside. (If substituting candied ginger, toss with cherries.) When ice cream is close to desired consistency (about five minutes before it’s finished), add fruit and chocolate. When ice cream is ready, transfer to a storage/serving container with a lid. Chill in the freezer if desired, or serve immediately, either on its own or between two cookies.

Liza Schoenfein is food editor at the Forward. This recipe originally appeared on her personal blog, Life, Death & Dinner. Contact her at schoenfein@forward.com or on Twitter, @LifeDeathDinner.