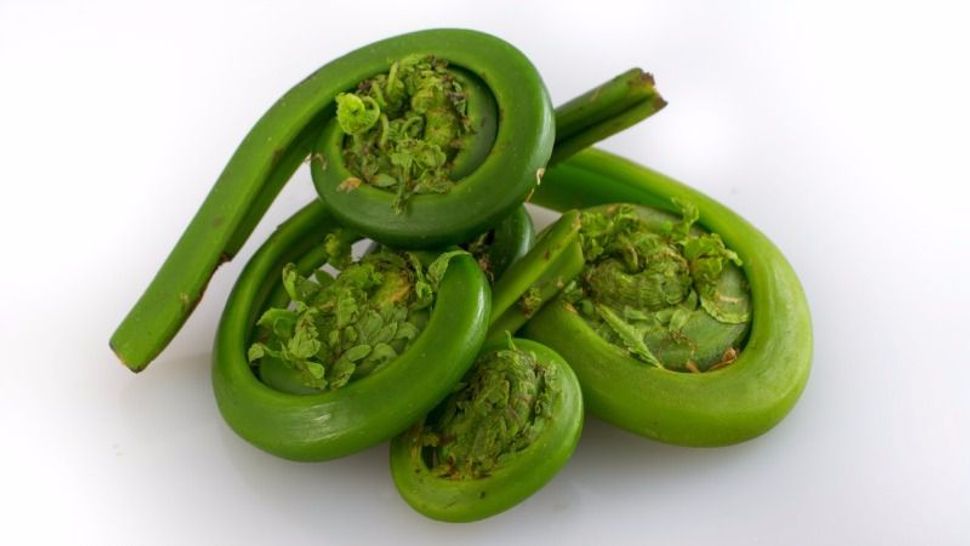 It used to be said, only half in jest, that if a Russian immigrant coming off the plane at Ben Gurion airport wasn’t carrying a violin, it meant that the new oleh (immigrant to Israel) was a pianist.

I was thinking of the Russians this week as fiddlehead fern season kicked into high gear. Well established in eastern Asia, including Russia, for centuries, foraging for these delicious veggies that taste somewhat of asparagus was mostly likely on our ancestors’ must-do list every spring.

So what exactly are fiddlehead ferns? They’re basically the furled fronds of young ostrich ferns. They got their name for their uncanny resemblance to the scrolled head of the violin.

These delicate greens are typically available for only a very short time in early spring in the Northeast. Ostrich ferns range from Newfoundland to Alaska and British Colombia, south to northern California, the Midwest and the Southern Appalachians. It is abundant in the upper Great Lakes, the Northeast and much of southern Canada. Of course, you can always find them at a farmer’s market or your local greengrocer — again, during a very short season. In areas of the country where they don’t grow they are expensive, but hiking out into damp meadows and riverbanks, and even in hardwood forests, to harvest them is a terrific way to channel your great-grandmother (and, save some money). Of course, if your bubbe didn’t teach you how to scavenge for the morsels, here is a simple step-by-step guideline.

First of all, you must make sure that you are choosing the right type of ferns, as they all have a fiddlehead stage. Doing it wrong can give you a big tummy ache. The fiddlehead has a few characteristics that distinguish it from other ferns. The bright green ferns grow in a woody cluster, and you can spot them by searching out the old, brown past-season dead shoots. The stem is not round; rather, it has a U-shaped groove running down its length. And, it is smooth, not fuzzy, and has a light brown parchment-like paper covering around the fiddlehead.

Cut them close to the ground, or simply snap them off, but as I’ve written before, it is extremely important not to over-harvest. Always leave enough for the plants to ensure sustainable harvest; repeated over-picking will eventually kill the plant.

Once you have enough fiddleheads to feed yourself and your dinner guests, preparing them is simple, but do it as soon as possible. It is important to cook them sufficiently, as eating raw or undercooked fiddleheads can cause all manner of gastrointestinal distress.

1) Bring a large pot of water to boil.

2) While waiting for the water to boil, remove the brown papery covering from the fiddleheads, trim the ends, and swirl in a bowl of cool water to which 1 tablespoon lemon juice has been added.

4) Heat oil in large skillet over a medium-high flame. Add the fiddleheads, garlic and seasonings and cook, stirring, for about 5 minutes, until browned. Remove from heat and sprinkle with remaining lemon juice.