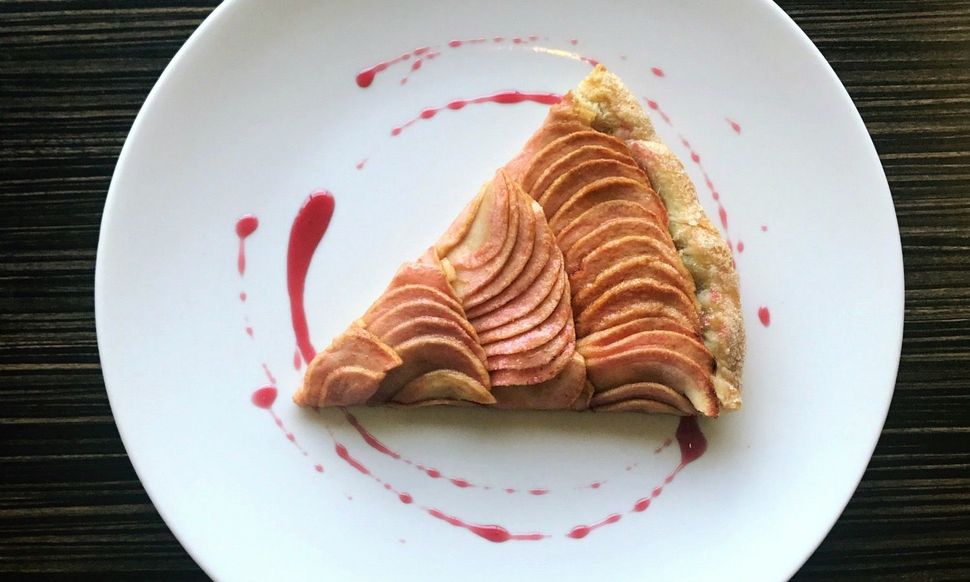 This year, Shaya’s holiday menu will include challah with labneh butter, heirloom tomato and pickled golden raisins; hummus with black-eyed pea masabacha, pecans and black garlic; and an apple galette with tahini frangipane and honey-hibiscus glaze, created by Shaya pastry chef Bronwen Wyatt. We have the recipe right here, so you can make it too. 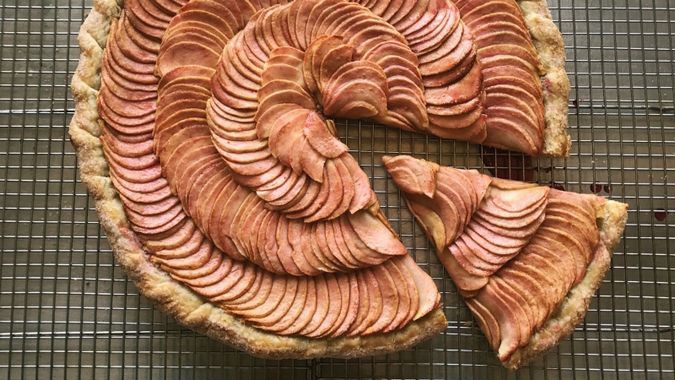 This can be assembled a day or two ahead. It will make enough for two tarts (it’s a little tricky to whip a smaller amount of tahini), but it freezes wonderfully for future use, so you can save half for later.

Begin by whipping the tahini in the bowl of a stand mixer fitted with a whisk attachment for five minutes or until lightly thickened. Slowly add the sugar and beat to combine. Add the butter piece by piece and scrape down the sides of the bowl. Add the egg and salt and beat to combine. If making ahead, bring the frangipane up to room temperature before using.

1) Preheat the oven to 500 degrees. If you have a pizza stone, go ahead and place it on a rack in the center of the oven.

2) Begin by rolling your galette dough in a large circle about 19 inches in diameter. Trim the edges. Gently transfer it to a round, perforated pizza pan lined with parchment paper (or a sheet tray if you don’t have a pizza pan). Spread the soft tahini frangipane over the dough, leaving about a one inch border. Fold the border of the dough over itself in an overlapping pattern around the edge of the tart. Place in the refrigerator while completing the next step -the crust should be thoroughly chilled before assembly.

3)Then peel, quarter and core the apples (reserve a cup of the apple peels for the glaze). Take each quarter of an apple and slice it thinly, taking care to keep the slices snug together -it will make your tart a lot easier to assemble.

4) When all your apples have been sliced, take the crust out of the fridge. Beginning at the outer border of the tart, fan out your bundles of apple slices and place them in an overlapping pattern around the outside border. Repeat with the rest of your apple slices, making overlapping rings until you reach the center of the tart.

5) Brush the crust of your tart with a little soft butter and sprinkle ⅓ cup of sugar over your apples and ⅓ cup sugar on your buttered tart crust. Place your tart in the oven on top of the pizza stone (if using) and immediately drop the oven temperature to 400 degrees. Rotate the tart a ¼ turn every ten minutes, and bake for a total of 45-50 minutes or until the edge of your tart is a deep golden, caramelized brown. You can assemble and reduce the glaze while the tart us baking.

6) Remove from the oven and immediately transfer the tart to a rack to cool (I like to slide it off the pan and parchment and let it cool directly on the grate to prevent the bottom crust from getting soggy). Let it cool about ten minutes and glaze it with the honey-hibiscus glaze. The tart is nice on its own or served with ice cream.

Place the dry ingredients in a bowl. Take half the butter, and using your fingers, gently work it into the flour until it has been broken down into very small pieces (smaller than a pea). Take the rest of the butter and toss it into the flour mixture, then flattening each piece with your fingers. The mixture should look rough and shaggy, and all the butter should be coated in flour. Dribble the ice water into the flour/butter mixture a little at a time, tossing it until the dough begins to come together, taking care not to overwork it. Press the dough into a flat circle and let chill at least one hour or up to two days.

Place the apple peels, water and hibiscus in a small non-reactive pot. Simmer until the apple peels are limp and the hibiscus has suffused the water with a nice deep pink color. Strain. Add the honey, lemon juice, sugar, and salt and reduce until thick and syrupy (taking care not to scorch). The glaze is best used when a little warm.