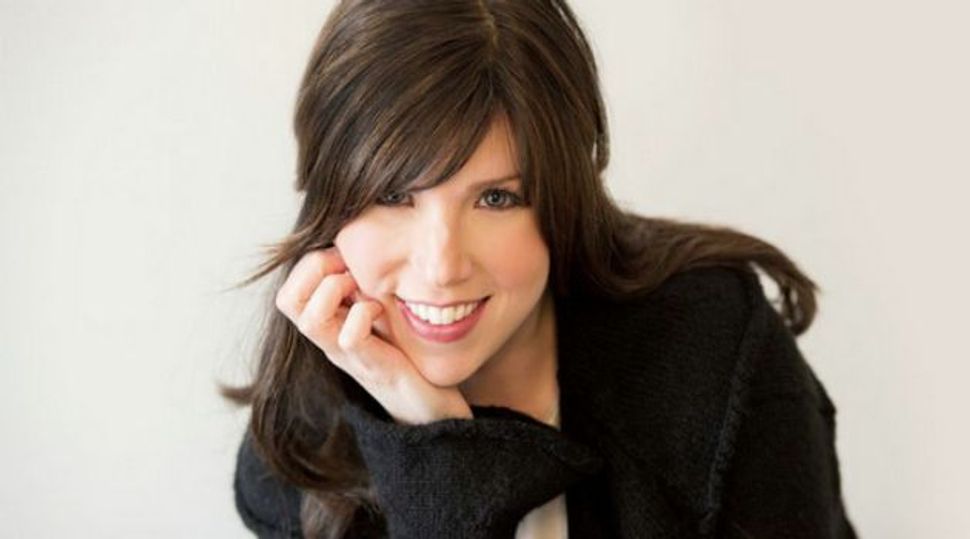 This is the fourth in a series of columns by Jamie Geller exclusively for the Forward.

I was totally Sephardi in a past life and Chasidish in another life — yes, I believe in past lives and can talk about that later; the music, the flavors, the warmth, simply speak to my soul.

My neshama is stirred by the spiciness of sabich slathered with schug and the sticky sweetness of the sesame seed candies that glue my teeth together. Mile high potato kugel is the things my dreams are made of and malawach and mandel bread make me dance. Like literally, get up out of my chair and dance. I’ve actually passed this gene on to my kids. Hubby started laughing when he saw my oldest do a little pirouette prior to din din the other night.

I was raised in a very hemishe home. What “hemishe” means is entirely up for debate. At its very core, the basic translation is “warm and homey,” but like all Yiddish terms it takes a book to truly define a single word. To me “hemishe” means a feeling of the old country, with a touch of chassidish tendencies. (The phrase “old school” could even work as a more colloquial definition of the term.) We didn’t have to travel very far for a taste of the old country, since my parents were actually born in Transylvania and didn’t immigrate to Ah-mer-eee-kah until they were in their teens.

Growing up, our food was so un-American and so different from my friends’. My grandfather made a chicken soup golden colored and rich tasting from marrow bones and chicken feet. I remember my dad sucking the meat (skin and all!) off the chicken foot, toe by toe. Now that’s hemishe.

My grandmother would knock out the marrow from the bones, spread it on fresh bread like butter, with the kind of care and respect only afforded to the greatest delicacies of the world. Now that’s hemishe.

And my mother would fish out the bundle of petrushka (Hungarian for parsley) and cut and feed it to my sister and me bite by bite (my turn, her turn, my turn, her turn…) — a scene played out in many hemishe households.

My father made a potato kugel that we waited for by the oven door. Always taking it out too soon, always eating it while it was too hot, always fighting over the corner piece.

My grandmother made her cholent in her Kenmore oven just like she used to in the village community oven and on Shabbos we would enjoy it slightly crispy around the edges with homemade kishka that had the fluffiness and sweetness of cake.

I never had a rugelach or babka before turning 18 and moving to New York, but I did know my way around a kokosh (kinda like the lower, longer, unbraided cousin of a babka), a kremesh (meaning “creamy” and only the most popular Hungarian puff pastry filled with custard and finished with a dusting of powdered sugar) and a dobosh (seven-layer Hungarian sponge and chocolate buttercream cake topped with crackling hard caramel). Basically, if it was a dessert and ended with an “-sh” it didn’t stand a chance in our house.

My grandfather’s famous potato latkes were at once the crispiest and fluffiest on the block, our Rosh Hashanah soup was filled with grizgalushka (Hungarian farina dumplings) and my grandmother’s gefilte was a handmade, homemade falsha (fake!) fish loaf (cause it was made from ground white meat chicken) replete with jellied broth.

Like I said, our food was always different than my friends. Our house even had a different smell. But I was thankfully never embarrassed by my family’s accents, loud voices, (kosher) “kielbasas” hanging from the rafters of our basement and dinners that consisted of tort pasui, Romanian bean puree (that took about a year and a day to prep) served with fresh bread. In fact, my American (for generations) friend Sara Vetter actually started requesting tort pasui every Friday when she came over after school.

We visited Israel a TON growing up and loved the Sephardic food influence, the bright sunny flavors, the fried veg, the spice, the heat. I became even more enchanted though when I married Hubby. All three of his sisters-in-law were Israeli and suddenly this blonde haired, blue eyed, tall Austrian Yekke is talking to me about kibbeh, yaprach and Moroccan cigars. And OMG he put tahini on everything.

My worlds collided and then exploded. Twenty five salatim became the new way of life. (‘Show a Moroccan woman a table with three legs and ask her what’s missing… “the salads” she’ll say, as the old Sephardi saying goes.) And I fell hard for a two-foot-tall, forever-cooked Yerushalmi kugel, sliced crosswise, thinly and served with an Israeli pickle. I was like what, What WHAT?!?!? Where have you been all my life?!?!?

As you can tell, this time of year has triggered so many food and family memories for me and reminds me how, despite all the culinary innovations, it’s those comforting Jewish foods from home that hold a piece of my heart. As we look toward the coming year this Rosh Hashanah, I can’t help but look back.

Jamie Geller is the only best-selling cookbook author who wants to get you out of the kitchen — not because she doesn’t love food, but because she has tons to do. As “The Bride Who Knew Nothing” Jamie found her niche specializing in fast, fresh, family recipes. Now the “Queen of Kosher” (CBS) and the “Jewish Rachael Ray” (New York Times), she’s the creative force behind JOYofKOSHER.com and “JOY of KOSHER with Jamie Geller” magazine. Jamie and her hubby live in Israel with their six super kids who give her plenty of reasons to get out of the kitchen — quickly. Check out her new book, ”JOY of KOSHER Fast, Fresh Family Recipes.”