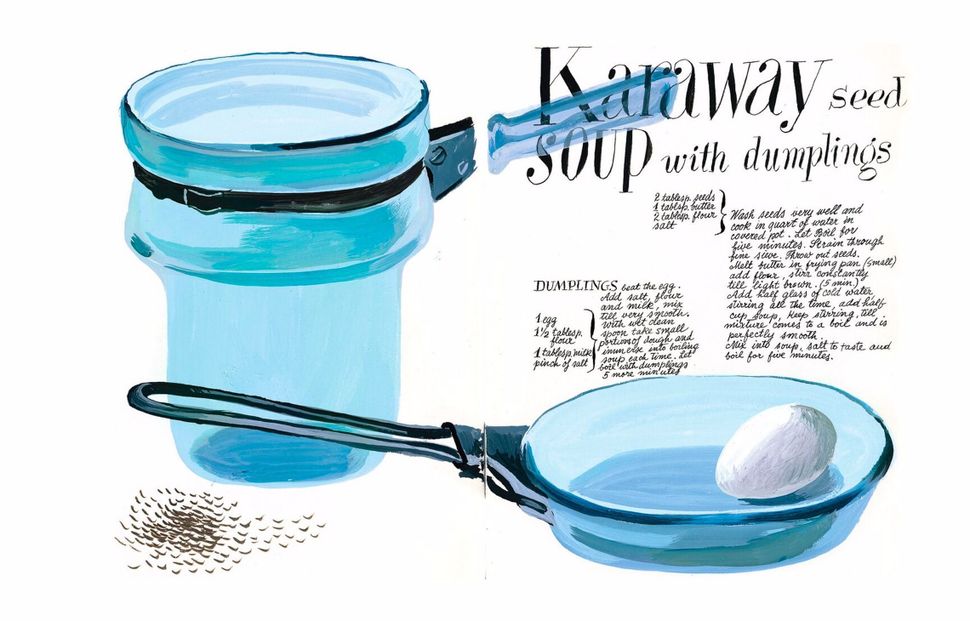 Caraway Soup With Dumplings from Cipe Pineles’s ‘Leave Me Alone With The Recipes.’ Image by Cipe Pineles

Cipe’s recipe for caraway soup with dumplings may make you wonder what kind of strange dish it will yield. The broth consists only of caraway-steeped water — essentially a tea — combined with a flour-and-butter roux, finished with spoonfuls of dumpling dough. It’s a traditional Hungarian dish called Köménymagleves, and, like the painting Cipe created to accompany the recipe, it doesn’t have a lot of color or detail. To modernize things a bit, this updated recipe leans toward a more classic chicken soup infused with caraway, creating a flavorful broth by poaching chicken breasts in the cooking water and adding caraway to the dumplings themselves.

1) In a large soup pot, heat oil, then add onion, carrot and celery and stir until softened but not brown. Add chicken breasts and whole caraway seeds, and fill pot with 8 cups cold water. Season water generously with salt (at least 2 teaspoons). Bring to a boil, then turn to a low simmer. Some foam will form on the surface, which can be skimmed and discarded. Allow chicken to cook completely, about 40 minutes. Check for doneness and continue cooking until the meat is cooked through. When done, remove chicken from soup and set aside to cool.

2) While the soup is cooling, make dumpling batter. Lightly beat the egg in a small bowl. Heat milk and butter in a small pot until just below a simmer. Add flours, salt and ground seeds into the milk mixture and continue stirring a minute or so until it thickens. Remove from heat and allow to cool slightly.

3) Add a generous spoonful of the soup broth to the egg and whisk quickly to warm the egg a bit and prevent it from cooking upon hitting the pot. Then pour the egg mixture into the flour and milk mixture, stirring to incorporate the egg without cooking it. The dough should be slightly sticky.

4) Bring soup back to a low boil and drop dumpling dough by spoonfuls into the broth, allowing the dumplings to cook for 4–5 minutes. They will rise to the surface as they cook through, but let them go another minute after they float to reduce any gluey texture in the center.

5) When chicken is cool, discard skin and remove meat from bones. Shred or chop meat as desired and add back to the soup before serving.

Reprinted with permission from “Leave Me Alone With The Recipes” by Cipe Pineles (Bloomsbury USA).