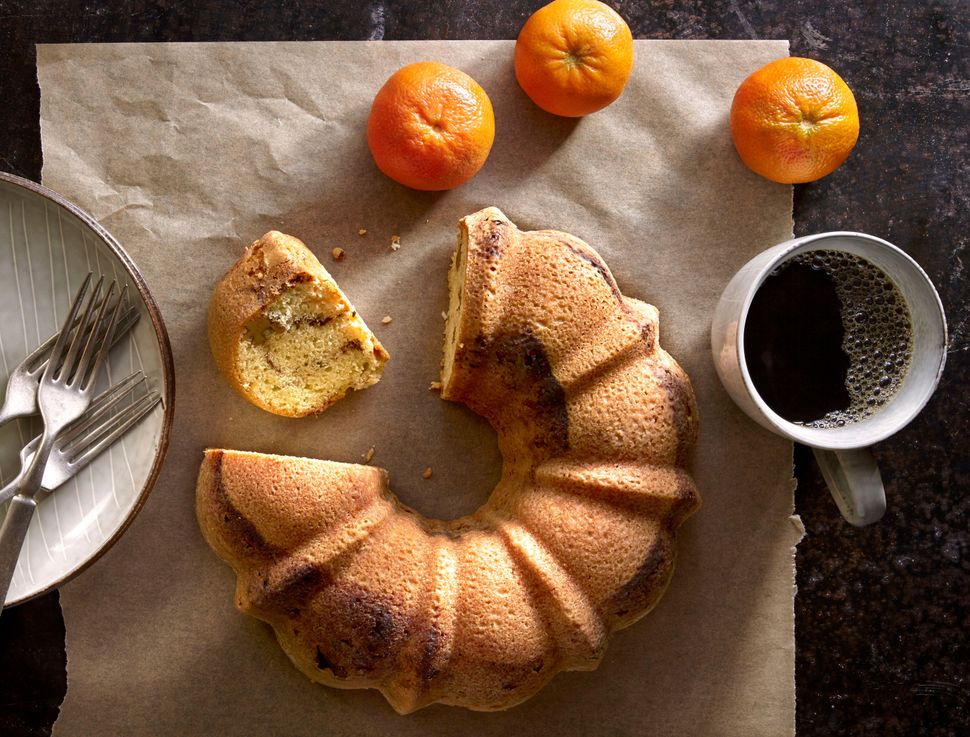 Below is an excerpt from the Zingerman’s Bakehouse cookbook. Zingerman’s is a special bakery dedicated to fine desserts that’s been serving the community of Ann Arbor since 1982.

This is our most popular coffee cake and possibly our most popular sweet item. It is adored as a daily treat and is definitely a Deli standard. Many Ann Arborites enjoy it regularly and send it to friends and family all over the country for holiday gifts.

Our cake is unassuming in appearance yet deeply satisfying in flavor. As you can see, it’s full of tasty fat—half a pound of butter, half a pound of sour cream, and three whole eggs—which yields a mellow and moist cake crumb. Contrasting this mellowness is the distinctive flavor of the cinnamon nut swirl created with Indonesian Korintje cinnamon, brown sugar, and freshly toasted walnuts. Consider grinding your own cinnamon for this recipe to get unmatchable cinnamon flavor.

Why is the sour cream coffee cake considered a Jewish dessert? Yeasted coffee cakes, baked in kugelhopf pans, were somewhat common in Eastern European Jewish baking, as was the use of sour cream. Without refrigeration, most milk was consumed in some fermented form. Sour cream, along with buttermilk, became an element common to their baking.

Fast forward to 1950 Minnesota, when a group of Jewish women wanted to bring back some of the old Jewish recipes. To be successful they needed the right fluted pan with the tube in the center, which wasn’t available in the United States. They approached a local pan-making company and asked the owner to create one. He generously obliged, and that first version was the inspiration behind the classic Bundt pans we are now all familiar with, branded as Nordic Ware. The ladies, thinking the European yeasted cakes were too time consuming, transformed them into a more American pound cake style, and the sour cream coffee cake as we know it was born.

STORAGE: This cake is so rich that it keeps very well at room temperature for at least two weeks, if wrapped well. It also freezes nicely. Wrap it carefully in plastic wrap and then put it in a plastic freezer bag or airtight container. It will hold well for up to three months in your freezer.

LEMON OIL: At the Bakehouse, we love intense flavors and are always looking for ways to increase the flavor in our recipes. With citrus flavors it’s not always possible to get the intensity we want with only fresh juice or zest. Fortunately, many years ago we discovered a line of citrus oils from a company called Boyajian. According to Boyajian, they are “natural essences that are cold pressed from the rind of the fruit.” They are considerably more intense than extracts and are used in small quantities. Boyajian suggests starting with 1⁄2 tsp per cup of dry ingredients, plus 1⁄4 tsp per cup of liquid ingredients. We often use some fresh juice and zest and then a little oil just to bump up the flavor.