Sweet Peppers with Feta for Sukkot 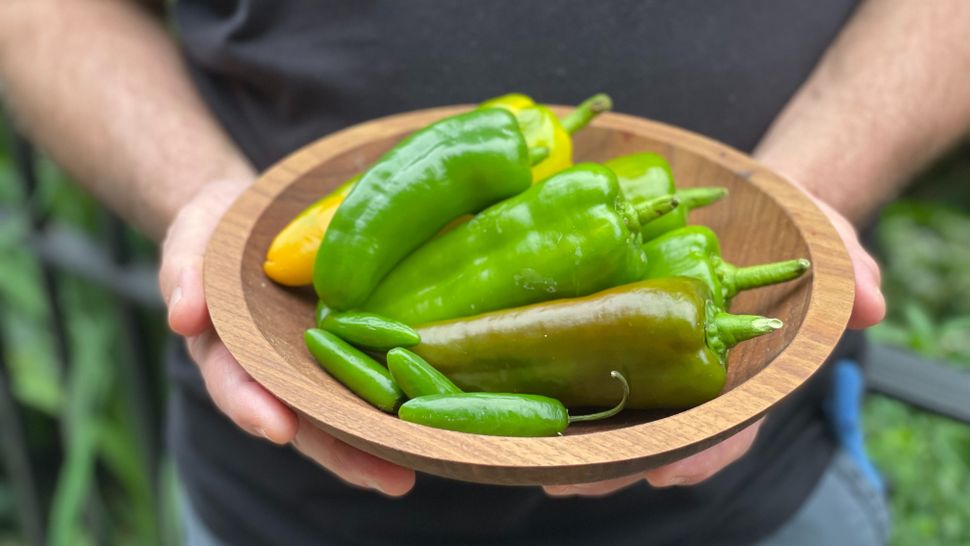 The harvest holiday of Sukkot feels immeasurably more relatable to me this year than it has in the past, because this year I’m in the midst of my own actual harvest.

The garden I planted in the spring has gone from relative order to wildly overgrown; a beautiful, bountiful mess. The carrots, which I wrote about for Rosh Hashanah, have all been pulled up, and most of the lettuce is gone. But the cucumbers, tomatoes, and peppers are so abundant I can hardly transport them in a single trip from garden to kitchen. The cucumbers seem to appear full-grown every day among the enormous heart-shaped leaves that climb two trellises. Prolific tomatoes which I wrote about for Yom Kippur are ripening at their own inconsistent pace within a huge tangle of bushy vines. And the peppers are hanging heavy from their stalks, glossy and green.

The peppers are making me impatient. I didn’t want green ones, and worried briefly that the seed company had sent me the wrong packets. What I purchased was an elongated Italian variety of sweet pepper called Corno di Toro, in two colors: yellow and red. I know they all start out green, but I expected them to have matured by now. That said, I ate a couple that were just beginning to go yellow, and they are already sweet and full of flavor, with less of that vegetal, almost grassy quality that regular green peppers possess.

I always think of sweet peppers on Sukkot, because stuffed peppers—indeed stuffed foods in general—are often eaten on the holiday to symbolize a bountiful harvest. Of course, they’re not just relegated to the holiday.

“Stuffed peppers became one of the few pepper dishes widely adopted by the general Ashkenazic community,” Gil Marks writes in his “Encyclopedia of Jewish Food,” pointing out that “The Settlement Cook Book,” which was my Hungarian grandmother’s go-to, contained not one but four stuffed-pepper recipes. My mother made two versions: one with ground beef and rice and another with tuna, pine nuts, and capers. My own recipe for 5-spice stuffed peppers is here.

Apparently, Jews from America to Europe to the Middle East make some variety of stuffed pepper. I thought about coming up with yet another version this year, but decided the category was pretty well saturated and that I’d take my elongated, still-green Corno di Toros in a new direction.

I love the combination of green peppers and feta cheese, and originally thought I’d riff on Greek salad, roasting the peppers to make them more interesting, and possibly putting the whole thing on a bed of tzatziki, that wonderful yogurt-cucumber sauce. Thinking about how to add color, texture, and flavor, I realized I had a pomegranate—itself a symbol of fruitfulness in the New Year— and that the sweet-tart arils would be a wonderful foil for the slightly smoky, mild peppers. I’d add additional crunch with toasted walnuts, and scatter lots of herbs for freshness. Now I was thinking less Mediterranean and more Middle Eastern. I decided that the sauce would be a combination of whipped feta and tzatziki (or really Mast-o Khiar, the Persian yogurt-cucumber sauce), and that I’d swathe the roasted peppers in a mixture of olive oil and pomegranate molasses.

The resulting dish hits all the right notes: It’s salty, sweet, smoky, and sour; creamy and crunchy. If my peppers had another week on the vine, it would be even more vibrant. I’ll be sure to plant those seeds a little earlier next spring so the peppers will be at their peak and ready to harvest in all their multi-colored glory for Sukkot. 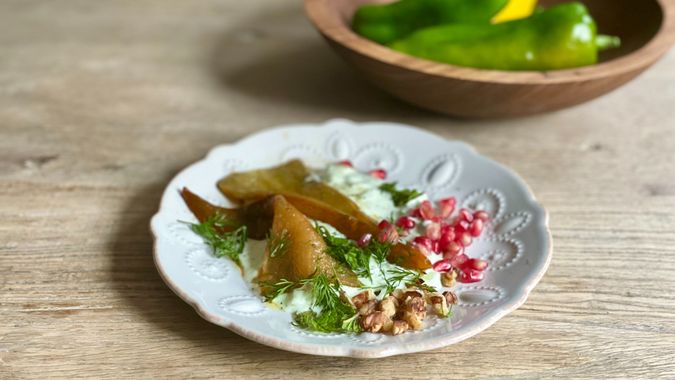 Serves 6 as an appetizer

1) Using tongs, hold a pepper over a flame (either a gas burner or a grill) to blacken the skin, rotating it until evenly blackened. Place pepper in a medium bowl and cover with a kitchen towel. Repeat with remaining peppers. (Alternatively, roast peppers in a 425 degree oven, turning every 10 minutes or so until the skin has blackened evenly.) 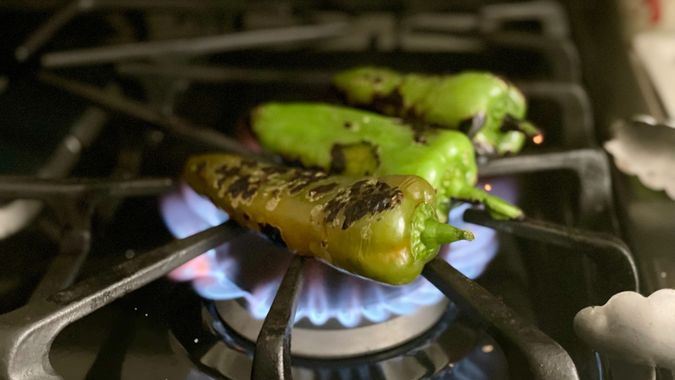 2) While peppers are cooling, make whipped feta sauce: In a food processor or blender, combine yogurt, feta, half the fresh mint, half the fresh dill, the dried mint, and the garlic. Process until smooth, scraping down the sides after about a minute, then processing for a minute more. Transfer to a bowl and stir in cucumber.

3) Mix olive oil and pomegranate molasses in a medium bowl.

4) Place walnuts in a hot dry pan and toast, shaking the pan, until just fragrant.

5) When peppers are cool enough to handle, use your fingers to slip off their skins, rinsing if necessary and then patting dry.

6) Cut the stem off each pepper then slice in half lengthwise and remove seeds. If using bell peppers, cut each half into 3 slices. If using long (Italian) peppers, no need to slice further. Place in bowl with olive oil and pomegranate molasses and stir to coat.

7) Mound a platter (or individual plates) with whipped feta, and arrange peppers on top. Sprinkle with pomegranate seeds, walnuts, and the rest of the fresh herbs. 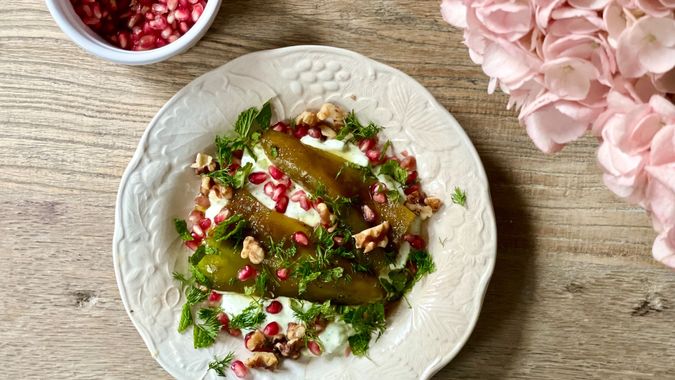 Liza Schoenfein is a former food editor of the Forward and the author of the blog Life, Death & Dinner. Follow her on Instagram, @LifeDeathDinner.

Sweet Peppers with Feta for Sukkot