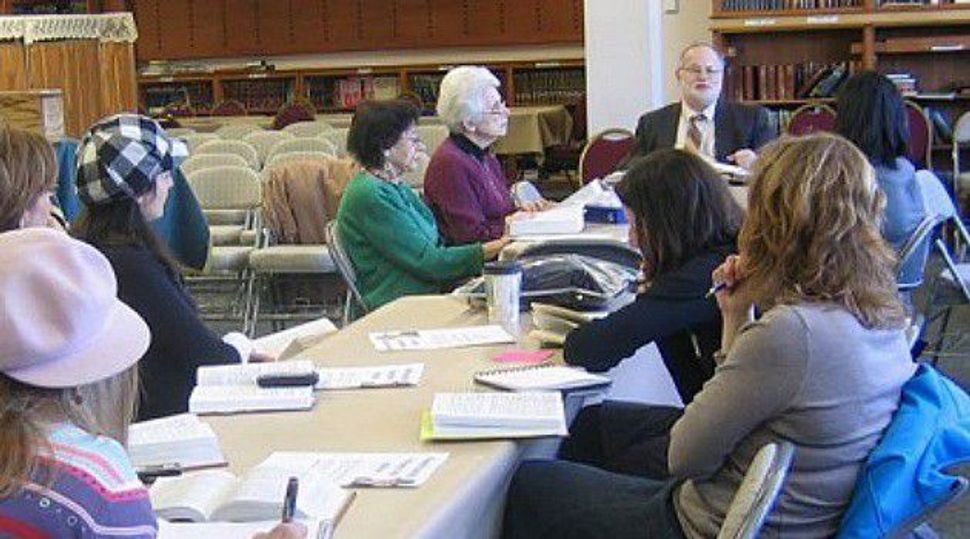 (JTA) — If Rabbi Steven Pruzansky of Teaneck, N.J., had his way, Arab rioters and stone throwers would be shot with live ammunition. Arabs would be barred from the Temple Mount for six months. Any village from which two or more terrorists originated would be razed and its residents deported. Arab terrorists would be executed, their bodies cremated and buried with dead pigs, their families deported and their homes destroyed or given to Jews.

“Measures need to be implemented that encourage Arab emigration — the payment of stipends, compensation for property, etc. They must be made to feel that that they have no future in the land of Israel — no national future and no individual future,” he wrote.

Though Pruzansky removed the post, titled “Dealing with Savages,” by Sunday, he told JTA it was because of threats that he would not specify — not because he had any regrets about the content.

“I don’t think I’m saying anything outlandish,” Pruzansky told JTA in an interview.

Who is Pruzansky and why should his views matter? He’s a pulpit rabbi in America, not an Israeli politician. He does not have a national following.

But he is the spiritual leader of the largest synagogue in Teaneck in what may well be the biggest modern Orthodox suburban community in America. And the largely insouciant response among the 800 member families at his shul, Congregation Bnai Yeshurun, to the stream of similar commentary offered by the rabbi over the years on his blog and from the pulpit is a sign of where political discourse is in some corners of the American Jewish community — particularly in Orthodox synagogues, where right-wing views on Israel tend to dominate.

It’s not clear how widely espoused viewpoints like Pruzansky’s are, but they are certainly widely tolerated.

A Bnai Yeshurun board member, Stan Steinreich, said Pruzansky — a one-time lawyer who was born in the Bronx and grew up in Monsey, N.Y. — enjoys broad support in the synagogue. Steinreich noted that anyone who finds him an objectionable spiritual leader has ample alternatives in Teaneck, a township located a few miles from New York City that is filled with Orthodox shuls.

Bnai Yeshurun is a self-described “mega shul” that’s so big it holds six weekday morning services (seven on Shabbat) and is open from 5:30 a.m. until 11 p.m. daily.

“Bnai Yeshurun is lucky to have a spiritual leader of Rabbi Pruzansky’s intellect, of his depth,” said Steinreich, who runs an eponymous communications firm. “Along with that comes a broad spectrum of opinion, and there will always be some things — as I think with any rabbi — where you sometimes agree and other times disagree.”

Abraham Foxman, the national director of the Anti-Defamation League, denounced Pruzansky’s latest screed, published at the end of a week in which five Israelis were killed in a terrorist attack at a synagogue in the Har Nof neighborhood of Jerusalem.

“This is outright racism and bigotry,” Foxman told JTA. “We all feel the anguish and pain of the tragic loss, but our response isn’t death and destruction. Coming from a rabbinic authority, it’s just hideous.”

Foxman, who lives in Teaneck, used to be a Bnai Yeshurun member but quit in 1995, a year into Pruzansky’s tenure, to protest the rabbi’s vitriol toward Israeli leaders. Not long before, Pruzansky had called the government of Prime Minister Yitzhak Rabin a Judenrat — the term used to describe the Jewish councils that did the Nazis’ bidding during the Holocaust.

“We’re not immune from extremism on either side. The issue is: Is it tolerated, for how long and in what circles?” Foxman said. “I certainly don’t believe the majority of his congregation supports these views, but now that they’re aware I would hope that they would care.”

Despite his controversial positions and writings, including strident criticism of President Obama, Pruzansky for years has enjoyed the embrace of the Orthodox establishment. He is an executive committee member and a former vice president of the Rabbinical Council of America, the main modern Orthodox rabbinic association. Pruzansky was slated to speak at next month’s annual Orthodox Union convention, though he recently informed event organizers that he wouldn’t be able to make it.

And for seven years, Pruzansky led the RCA’s conversion beit din, or rabbinical court, in Bergen County, of which Teaneck is a part. He resigned last month to protest the RCA’s appointing of a multigender committee to review its conversion process and suggest safeguards against possible abuses. The RCA’s review was launched in the wake of the Oct. 14 arrest of Barry Freundel, a prominent Orthodox rabbi in Washington and the head of the conversion rabbinical court there, on charges that he spied on women in the mikvah.

The RCA’s review committee “consists of six men and five women, bolstering the trend on the Orthodox left to create quasi-rabbinical functions for women,” Pruzansky wrote in an Oct. 30 blog post announcing his resignation. “I do not wish to be coerced to apply standards and guidelines that, to my thinking, may not comport with the requirements of Torah, and the makeup of the committee will almost ensure that outcome, however it is presented.”

Pruzansky then got into a public spat with The New York Jewish Week after the newspaper mischaracterized his role with the beit din and his association with Freundel. Pruzansky wrote of The Jewish Week’s editors: “They should apologize. But, I guess, to follow their way of reporting, both The Jewish Week’s publisher and Julius Streicher (Der Sturmer) published newspapers that dealt a lot with Jews. Same business, I suppose. That’s bad company to be in.”

The Jewish Week — whose publisher, Gary Rosenblatt, also lives in Teaneck — said in an editorial that it found the Der Sturmer comparison “outrageous, particularly coming from a leading community rabbi and RCA executive member. And to date, the lack of a public expression of remorse from the rabbi and the institutions he serves, or is affiliated with, speaks volumes.”

Meanwhile, in Israel, officials across the political spectrum — from Justice Minister Tzipi Livni of the centrist Hatnua party to Economy Minister Naftali Bennett of the far-right Jewish Home party — have spoken out forcefully in recent days against the kind of collective punishment that Pruzansky seems to advocate. And Prime Minister Benjamin Netanyahu last week weighed in with a statement saying, “There can be no discrimination against Israeli-Arabs. We must not generalize about an entire public due to a small and violent minority. The vast majority of Israel’s Arab citizens are law abiding and whoever breaks the law, we will take determined and vigorous action against him.”

In his blog post, Pruzansky faulted Israelis for failing to recognize their enemies.

“Israel has to act, especially as the violence has spiraled out of control,” he wrote. “At a certain point, the unrestrained behavior of unruly animals becomes the fault of the zookeeper, not the animals.”

Among other things, Pruzansky suggested relocating the mosque atop the Temple Mount to Saudi Arabia and said Arab-Israelis who support terror should forfeit their citizenship, though “those who wish to stay and be peaceful, acknowledging the sovereignty of the Jewish people in the land of Israel, are welcome to stay.”

In the interview with JTA, along with saying he didn’t believe his views were outlandish, Pruzansky said his mosque suggestion was a bit tongue in cheek.

Within his own synagogue, Pruzansky said the response to his commentary on Israel, Arabs and the Obama administration’s Middle East policies range from complete agreement to complete disagreement, with everything in between.