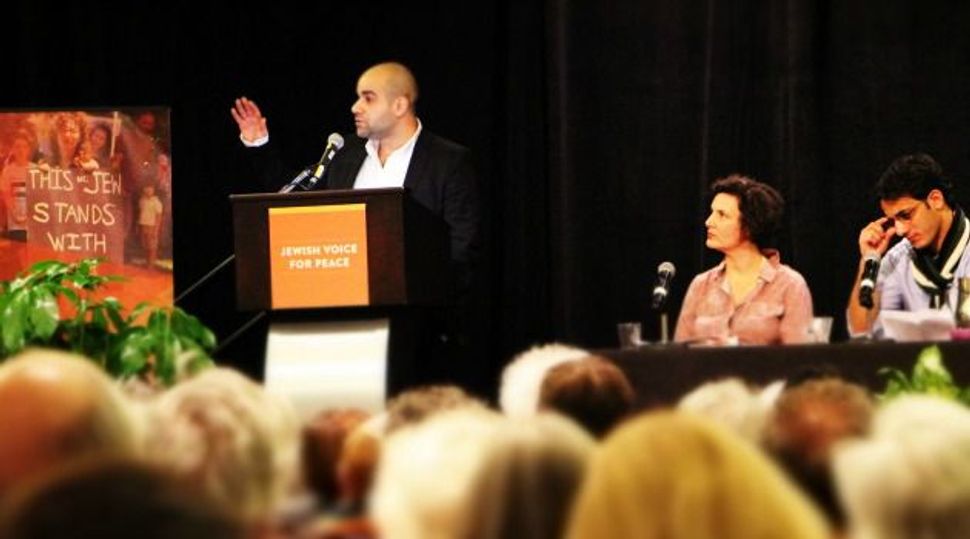 Image by Courtesy of Rebecca Vilkomerson

At the opening plenary of Jewish Voice for Peace’s recent national conference, Rabbi Alissa Wise, JVP’s co-director of organizing, asked the crowd of some 600 how many were attending their first such gathering; about three-quarters of the room shot up their hands.

For the group whose advocacy of boycotting, sanctioning and divesting from Israel makes it a pariah in most of the rest of the Jewish community, these have been boom times. And for many of its members, the reason appears to be a continuing desire to assert their opposition to Israel’s fundamental policies in a Jewish context rather than abandon their Jewish identity altogether.

One of those raising his hand was Noah Knowlton-Latkin of California’s Claremont Colleges. Like many of those in attendance, Knowlton-Latkin, a sophomore, was involved earlier in Students for Justice in Palestine, a campus group devoted to organizing students to oppose Israel’s occupation of the West Bank and siege of Gaza. The group also pushes college administrations to cut their economic and academic ties to Israel.

But last summer, Knowlton-Latkin reached out to JVP to express his concerns in a Jewish context. “It was great to find out that this existed,” said Knowlton-Latkin, who came to the conference with two other Jewish Claremont students, both members of SJP.

JVP’s recent conference, which took place in Baltimore from March 13 to 15, was notable for several new developments. Two weeks earlier, after a lengthy process that included study committees and membership surveys, JVP’s board of directors voted to fully support the movement to boycott, divest from and sanction Israel, or BDS, as it is popularly known. JVP’s call for a full economic boycott of Israel comes after years of supporting a more limited boycott of only companies that operated in the occupied territories.

JVP’s full embrace of BDS includes endorsing a right of return for Arabs and for descendants of Arabs who fled or who were expelled by Israel’s army in the 1948 war that established the state. That population, most of whom remain stateless refugees, now numbers more than 5.2 million. Israel and its supporters, including even dovish Zionist parties such as Meretz, argue that full implementation of the United Nations resolution calling for their return would render Jews a minority in their own state. It would mean, they say, the end of Zionism.

But JVP’s president, Rebecca Vilkomerson, told the Forward: “For there to be a sustainable and just peace, that is one of the issues that we have to grapple with. We believe that there can be a homeland for Jewish people that is not based on the systematic denial of rights of Palestinians.”

JVP does not offer details on how that could be if such a return indeed took place.

Most striking at this conference was the way Israel’s hard-right turns, and particularly last year’s war in Gaza, have fueled JVP’s growth among a cohort of mostly young people who find the response of other Jewish groups, including the dovish group J Street, simply inadequate. JVP’s leaders anticipate that this trend will only quicken following the recent election victory of Prime Minister Benjamin Netanyahu. They point to his election eve disavowal of a two-state solution and his election day warning about Arabs voting, plus the prospect that he will soon lead an even more right-wing government.

There are now 65 JVP chapters, up from 40 a year ago. Vilkomerson says JVP now has 9,000 dues-paying members, compared with 600 when the Forward last profiled the group in 2011. In the tax year that ended in June 2013, JVP had $1.1 million in donations. Vilkomerson said she expects this year’s total to top $2 million, almost all of it from individuals. The group has more than 204,000 Facebook followers, more than twice as many as the American Israel Public Affairs Committee and about eight times as many as J Street.

For all their alienation from the mainstream community, JVP members seem to share an urgent need to voice their angst in a Jewish context, and to project it outward to the world, also citing their status as Jews. Critics condemn this as mere exploitation of their Jewishness in order to gain a hearing the group would otherwise be denied.

But many JVP members do come from backgrounds of serious Jewish engagement. The conference itself opened on a Friday night, with the group celebrating Kabbalat Shabbat, and included a memorial service for those killed in the war in Gaza, during which members chanted the Mourner’s Kaddish and the prayer for the dead, El Maleh Rachamim. JVP says the group offers the members a place to be their “whole selves.”

“21yrs in many jewish spaces & I’ve never felt so at home,” one participant, Talia Bauer, wrote on the group’s Facebook page after the conference.

Another participant wrote, “For three days, I was immersed in a Jewish community unlike I have ever been a part of, one rooted in justice that welcomed all of me.” She wrote anonymously, she said, to avoid her family learning of her involvement with JVP.

Some in the mainstream grant them this point. “Any sort of Jewish engagement by young people is a positive thing,” said Steven M. Cohen, a professor at Hebrew Union College-Jewish Institute of Religion who studies the American Jewish community. He said that JVP, along with anti-democratic far-right groups and “any group that represents lots of Jews,” should be invited to be members of the Conference of Presidents of Major American Jewish Organizations and similar mainstream organizations. “JVP doesn’t show concern for the security of the State of Israel and doesn’t care if there is a Jewish State of Israel or not,” he added. Nevertheless, he said, “We should not exclude JVP from conversations — we should engage them.”

That view is unthinkable to many Jewish community standard-bearers.

“The positions and actions taken by Jewish Voice for Peace are anathema to mainstream Jewish organizations,” said Abraham Foxman, national director of the Anti-Defamation League, in a statement to the Forward. “The group’s activities, which include partnerships with anti-Israel organizations that deny Israel’s fundamental right to exist, put them at the farthest fringe of the Jewish community and would certainly preclude their participation among mainstream organizations.”

JVP, he said, “uses its Jewish identity to provide the anti-Israel movement with a veneer of legitimacy and to shield the movement’s most demagogic supporters from allegations of anti-Semitism.”

For many, the decision to join JVP was a painful, personal one, reflecting a lost faith in the State of Israel. Rabbi Brant Rosen, a co-chair of JVP’s rabbinical council, who served as a congregational rabbi in suburban Chicago for 17 years, joined in 2009, after Israel launched Operation Cast Lead, its military campaign into Gaza, with numerous reports — contested by Israel — of high civilian deaths rates.

Michael Davis, a congregational cantor in the Reform movement and a member of JVP’s rabbinical council, grew up Orthodox in Israel. He said that his own worldview changed after the assassination of Yitzhak Rabin at a fateful Tel Aviv peace rally in November 1995. “That was the end of the dream for me,” he told the Forward.

For Vilkomerson, it was the second intifada, starting in 2000. “There are these moments of cracking open, where people sort of make the leap,” she said.

Speaking after the Israeli election, Vilkomerson says she now expects another wave of people to come into the JVP fold. “Given that the American Jewish community is generally interested in peace and democratic values, we expect a lot of self-reflection about how to support a true peace in the days to come,” she said.