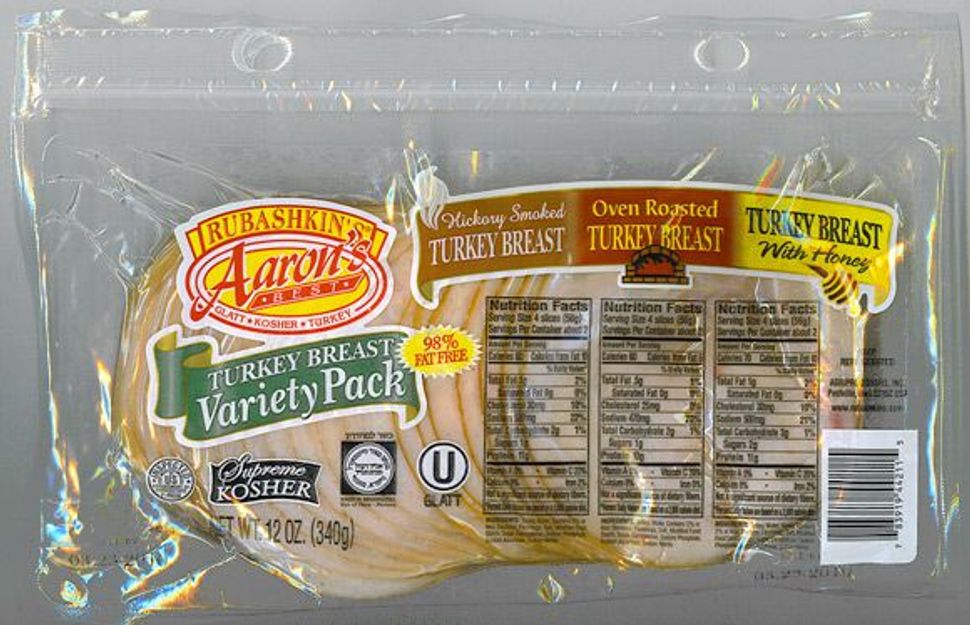 A reader from suburban Chicago was mystified when he made a trip to the kosher aisle of his supermarket this last weekend. There, among the kosher soups and meats, he found packages of Agriprocessors’ turkey and corned beef, being sold under the Aaron’s Best label.

The presence of these packages was a mystery because Agriprocessors ceased to exist this past summer — nearly a year after an immigration raid at the company’s Iowa slaughterhouse — when new owners bought the company and renamed it Agri-Star. How then, did meat from a company that no longer exists end up on the supermarket shelves all of these months later? Is it old meat — or is there a new company masquerading as the recently departed? The new owners of Agri-Star are also not producing beef in their Iowa facility, so whence the corned beef?

Our reader is not the only one who has had questions of this sort. Menachem Lubinsky, a kosher trade consultant, and one-time spokesman for Agriprocessors, recently saw Rubashkin’s label meat in Brooklyn stores and wondered: “Is this old product or new? And how did it get here?”

Calls to the store and the company did not immediately clear things up. A spokesman for the Jewel-Osco store in Evanston, Ill. said that the packages came from Agri-Star, the new company that purchased Agriprocessors out of bankruptcy in July. When that purchase happened, though, Agriprocessors ceased to exist, and the label our reader saw clearly has the old company’s name. Presented with this conflict, the spokeswoman for Jewel-Osco wrote back: “Our records show that the product was sourced from Agri-Star. You may want to give them a call directly to determine their packaging strategy.”

A lawyer for Agri-Star, Shalom Jacob, said that his company is indeed using the labels from the old company; Agri-Star gained control of Agriprocessors’ old brand names, such as Aaron’s Best and Shor Habor when it bought the company. But Jacob also said that the meat could have been produced earlier this year, when Agriprocessors still existed. Deli meat can last for up to a year in its package. The chicken breasts our reader found had a sell-by date of next March. The presence of corned beef seems to have an answer in Agri-Star’s arrangement with beef producers in South America.

The uncertainty raises the question of why the new company would use the old brand names. One of the benefits of a new ownership would seem to be the opportunity to break with the Rubashkin past — and all of its negative associations. So far, they don’t appear to be taking advantage of that opportunity.