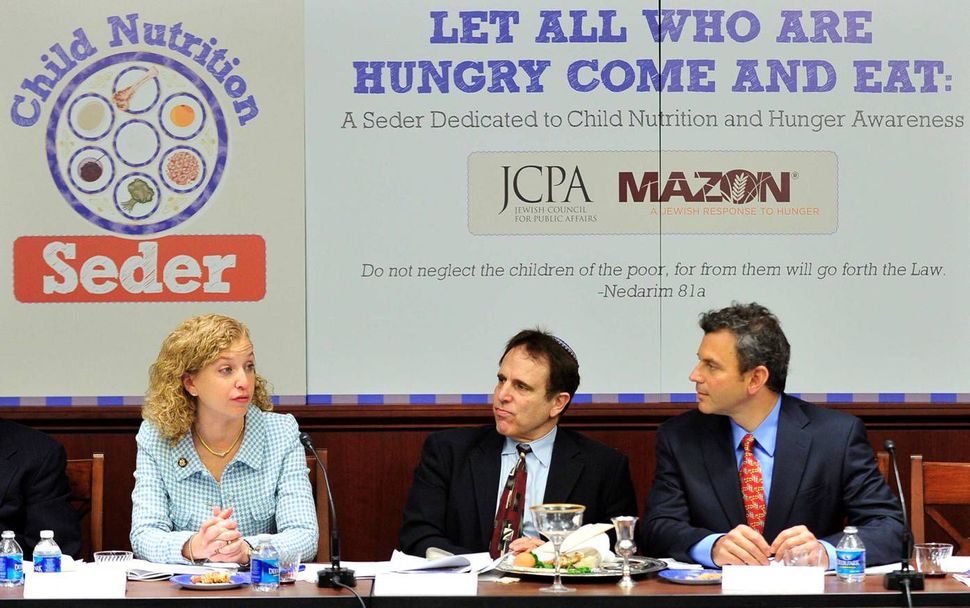 Ten O’clock in the morning might be a little early for a Passover Seder, especially if one intends to drink all four glasses of wine. But this was a Seder with a cause, and for dozens of Capitol Hill staffers, anti-hunger activists and students, its seemed just right.

The Congressional Seder on March 18 was dedicated to fighting hunger and is one of 40 similar Childhood Nutrition Seders taking place across the country before and after Passover. Organized by the Jewish Council for Public Affairs and Mazon: A Jewish Response to Hunger, their purpose is to mobilize both Jews and non-Jews to be anti-hunger advocates and to fight for reauthorization in Congress of the Child Nutrition Act before it expires.

It looked almost like a real Seder: Rabbi Steve Gutow, head of the Jewish Council for Public Affairs, read the Haggadah, which was written for the event, while sitting in front a traditional Seder plate. But nothing else was traditional. The Haggadah’s Four Questions were adapted to ask: “What does it mean to be hungry in America?” and “What will it take to end child hunger in America?” The Four Sons from the Haggadah were played by four students from the Tucson Jewish-Latino Teen Coalition, who spoke of their personal experiences as recipients of school food programs. And the Ten Plagues – they too got a new version to reflect 10 faces of hunger in America.

Three members of Congress stopped by for the early morning Seder, as did several administration staffers. The event ended with the signing of a petition calling on lawmakers to approve refunding for the child nutrition programs. The petition — no big surprise here — was printed on a matzo shaped poster.