Why Jewish Feminists Should Care About the Murder of David Kato 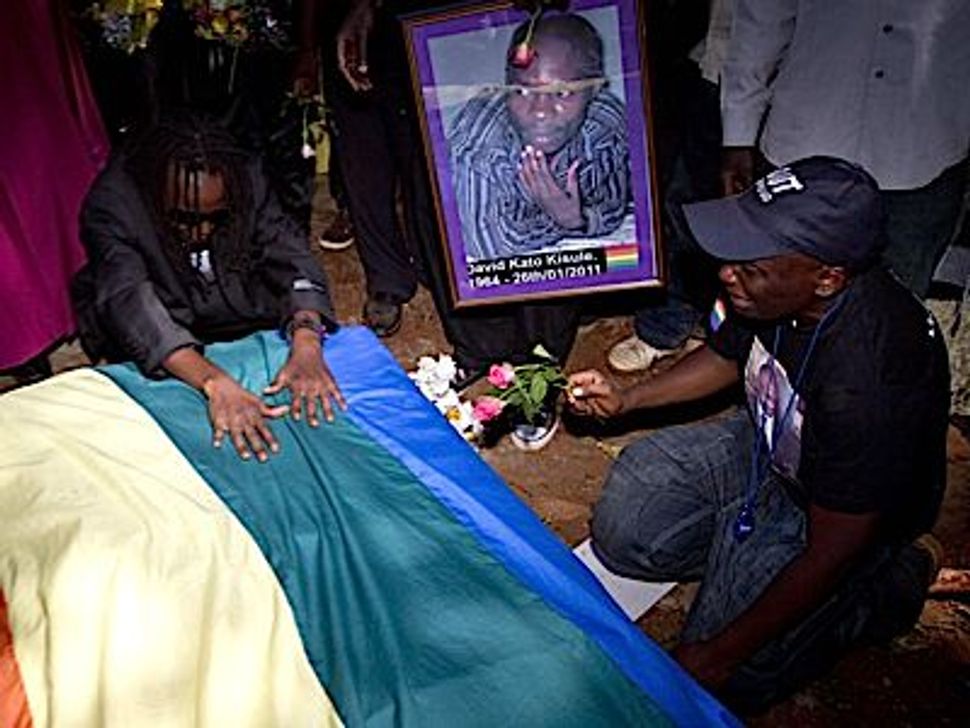 At the funeral of murdered activist David Kato, mourners pay their respects. Image by Getty Images

While the world has been watching in nervous anticipation as the situation in Egypt unfolds, other events on the African continent worthy of our attention seem to be eluding the public eye and miss out on a much-needed outcry — especially from Jewish feminists.

David Kato, a Ugandan teacher and outspoken gay rights activist, was murdered last week in his home. This happened right after Kato won a lawsuit against a local tabloid magazine, Rolling Stone, for publishing his photo and name under a banner calling for the execution of 100 LGBT leaders. “Hang them!” the headline read.

Richmond Blake and Rafaela Zuidema interviewed Kato a couple of weeks ago, and wrote about it on The Huffington Post:

A fast talker with emphatic hand gestures, Kato launched into harrowing stories of a transgender friend who was denied medical care after being gang-raped and a fellow LGBT activist who died from what Kato suspected to be poisoning. In defiance of such tragedies, Kato made himself one of the most visible and outspoken LGBT leaders in Uganda and was unceasing in his efforts. … “There aren’t many people now who are willing to stand up and say they support LGBT rights, but I believe we can find those who are open-minded and show them this is a matter of basic human rights,” Kato said confidently.

The tragic circumstances around this interview reflect incredibly disturbing trends. For several years now, the LGBT communities in Uganda and other African countries have been under threat of life and limb. Most horrifying to me is the increasing practice of what is alarmingly called “corrective rape”. This is where men — sometimes gangs of men — target a lesbian woman and rape her, presumably to make her straight, as if that notion contained any sound reasoning. Violently rape and torture me and then I’ll love you and all who are like you. Uh-huh. Voice of America News reports the following:

Ndumie Fundi, founder of Lulekisiwze an organization that helps women targeted because of their sexual orientation, says that in just one township, Gugulethu near Cape Town, 10 lesbians are being raped, assaulted, or both, each week. Fundi says that in most cases, like that of Millicent Gaike, the perpetrators say they are acting out of hatred for lesbians. “Andile raped Millicent last year in April, [Easter long weekend] for five hours,” Fundi said. “He strangled her, he threatened [to throw] her body in the river, he is going to make her pregnant and he hates the fact that she is a lesbian, and he is going to get his firstborn child from Millicent.”

This is horrifying on so many levels. In addition to all the classic aspects of rape, there is a deeper level of woman-hatred here. As if men are so personally outraged by the very thought that a lesbian exists, a woman who does not live her life revolving around the male body , that it gives men the right to destroy her body from the inside out, like sticking a snake into a sewage pipe. This is a world view in which women do not exist in any way other than in the sexual service of men, and the failure to fulfill that role renders her worthless and rapable, even murderable. Chilling.

At last year’s conference of the Jewish Orthodox Feminist Alliance (JOFA), my friend Laura Shaw, speaking at the opening plenary, called on Orthodox feminists to look beyond our own lives and collaborate with feminists around the world. I have thought about her words often, especially this week reading about David Kato, African lesbians and corrective rape. (We need to give this a different name, for starters. How about lesbian-bludgeoning?) The Jewish community must care about these events. Jewish feminists in particular, should put the protection of women’s bodies — and along with that, the protection of LGBT rights — on the top of our agenda. Our job is not to look out for Jews only, but for the protection of women, and fight against the violence embedded in patriarchal thinking. Violence against the LGBT community is an extension of the same twisted patriarchal system that keeps women, and Jewish women, in harm’s way. We need to care deeply about this.

We have to expand our understanding of advocating for Jewish women. We are ALL women. When a woman in the world suffers because she is a woman, I suffer, too. In fact, when a human being is hurt by another just because of who she or he is, I am hurt, too. When David Kato was murdered, and when Millicent Gaike was tortured, a piece of my own humanity was damaged. This is not only what makes us Jewish — it’s what makes us human.

Why Jewish Feminists Should Care About the Murder of David Kato