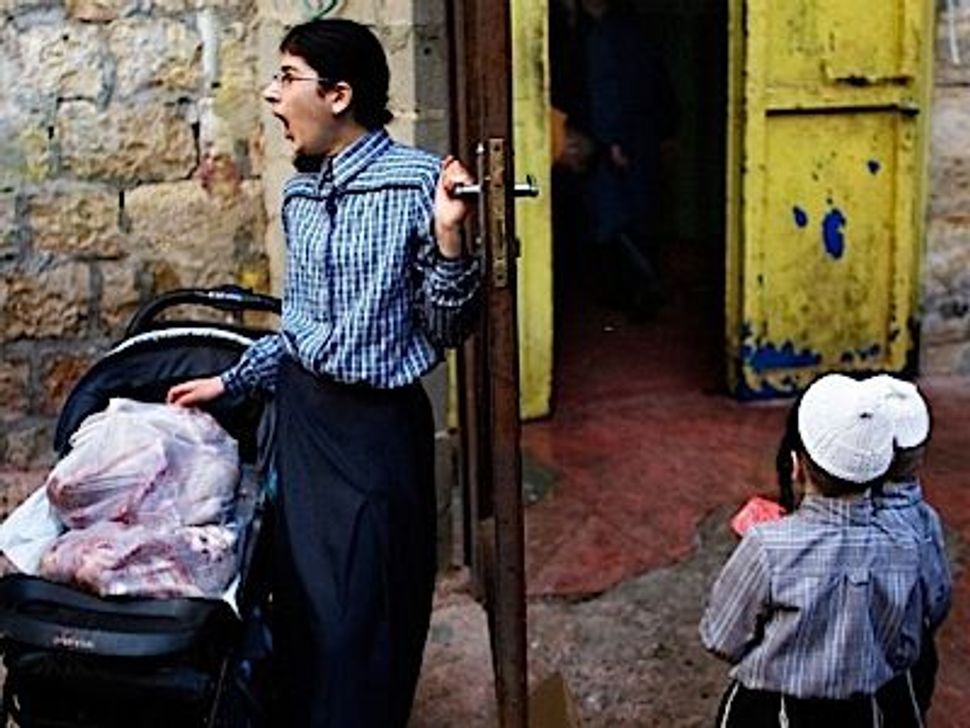 In certain ultra-Orthodox Jerusalem neighborhoods, saying thank you or owning an expensive baby carriage can be considered ?immodest.? Image by Getty Images

William Kolbrener has a compelling new essay in the Forward about the culture of silence between men and women in his Haredi Jerusalem neighborhood. In it, he notes the deep disrespect for women and girls to which it leads, as illustrated by the arrogant way a man clucks his tongue at Kolbrener’s daughter and her friend as he waves them to the back of the bus. It is also glaringly clear in the abuse hurled by multiple men at young girls in Beit Shemesh, including Na’ama Margolese, as they have endeavored to do nothing more than walk to school.

But there is another point missing from all of the discussion of the new vigilance on modesty and the backlash against it. The extreme focus on distancing from women turns them into sexual objects. There is something perverse about the obsession with female dress of these “guardians of modest,” and I don’t mean perverse just in the sociological sense. These men are so focused on sublimating their own sexual impulses that they see women only as sexual objects, whose images and very personhood must be contained to the point of invisibility.

And it is internalized all too quickly by too many religious women.

I’ve been observing this phenomenon since my college days in the Haredi women’s yeshiva Neve Yerushalayim, when a newly frum friend and I started walking up the staircase cut into the hillside in Har Nof to get to our destination, and noticed a clutch of yeshiva bochurs hanging out at the top of the stairs. She insisted that we walk all the way around a long, windy road to get to the top of the hill instead of taking the stairs, lest we walk too close to the young men. And this was more than 25 years ago. Of course, I wanted to know why the guys couldn’t just step aside as we passed, but my friend had already internalized the idea that women must accommodate men’s need for gender separation, and given up her voice in the dynamic. It was at that moment that I knew I could never be frum.

There are Haredi writers who have pointed to the sexualization of women in the general culture, visible in advertisements and commercials featuring scantily clad women, and I couldn’t agree more with that assessment.

But there is a flipside to focusing on modesty to the point of seeing women almost only as sexual objects. It is a paradoxical sexualization amid all this repression of perceived sexual danger, and something I would love to see some Haredi defender of the faith explore.