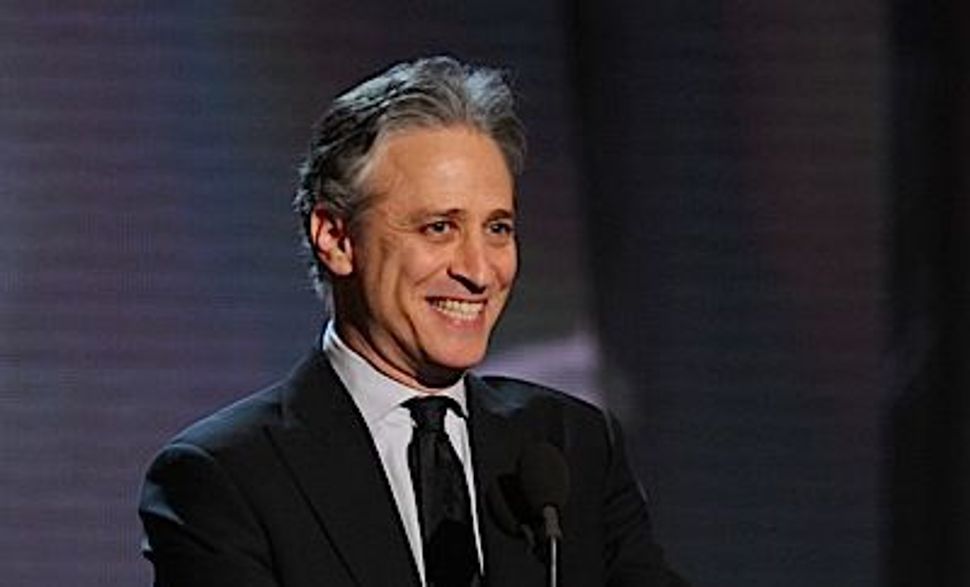 When I was just starting to write feminist blog posts, I wrote one complaining about the lack of genuine, women-focused discussion of reproductive rights in “dude” political culture, particularly on “The Daily Show.” While Stewart’s and similar shows tackled war and torture, gay rights and religion, I felt there was a squeamishness which curtailed discussion of abortion and women’s sexuality — and too much fawning respect for male authority figures who oppose women’s rights. Stewart’s weak interview with Mike Huckabee, in which he failed to effectively refute Huckabee’s points on abortion, exemplified this.

Then 2010 Irin Carmon, in an epic moment of reporting, blew the lid off the guy-centric culture at the beloved late night comedy news show. Her piece in Jezebel contained interviews with former employees who revealed that the onscreen “bro” culture was reflective of the shows inner workers: “behind the scenes, numerous former female staffers tell us that working there was often a frustrating and alienating experience.”

Recently I’ve also been turned off by Stewart’s treatment of protest culture, from his ironic “rally for sanity,” which I felt targeted mass demonstrators’ political passion itself instead of its extreme iterations, to his show’s baffled, disdainful treatment of Occupy Wall Street. In fact, because of this, I had stopped watching it entirely.

But in an idle moment last week, feeling frustrated about the “War on Women,” I turned on the show and saw a thorough upending of the GOP’s birth control mandate backlash. The segment “The Vagina Ideologues” explored the absurdity of the GOP crying “religious freedom.” It was followed up with a second segment mocking Sean Hannity’s all-male panel to discuss birth control.

Since then, the hits from Stewart on feminist issues have just kept coming. He took on a pair of ridiculous comments about women in the military — with an unforgettable chat with Samantha Bee — and then came back to the birth control battle with a segment called “The Punanny State,” which addressed the all-male birth control panel in Congress.

Stewart’s response to a minister who said the birth control mandate was like forcing kosher delis to eat pork was “while delicious, this makes no f-ing sense.” He wasn’t interested in lampooning both sides, nor mocking birth control, nor mocking feminists; he was straight up being our advocate without losing any edgy humor (although given what we know about the male-heavy lineup of the show, his staff’s subsequent imitation of all-male panels had an ironic twist).

But I was most impressed with his segment on Virginia’s proposal to force women considering abortion to undergo transvaginal ultrasounds, which he already-famously compared to a “TSA pat-down inside your vagina:”

Because this last segment dealt with the issue of abortion, which is far more tenuously supported among liberal men than contraception, his strong position, and the moral outrage that coexisted with biting humor, was notable.

There are a number of things that these segments prove. First, of course, that it’s possible to be funny and talk about reproductive rights at the same time. But second and most important, that the GOP’s extremism on birth control and abortion may be finally causing middle-of-the-road people like Stewart to wake up, to be appalled — and to realize that, perhaps, feminists have a good point. Just because we’re paranoid about the right wing doesn’t mean they aren’t really out to get us.

Stewart has been an extraordinary ally in the past two weeks. But I hope that the lessons linger for Stewart and his ilk: Include women in conversations about women, and don’t shy away from reproductive rights.