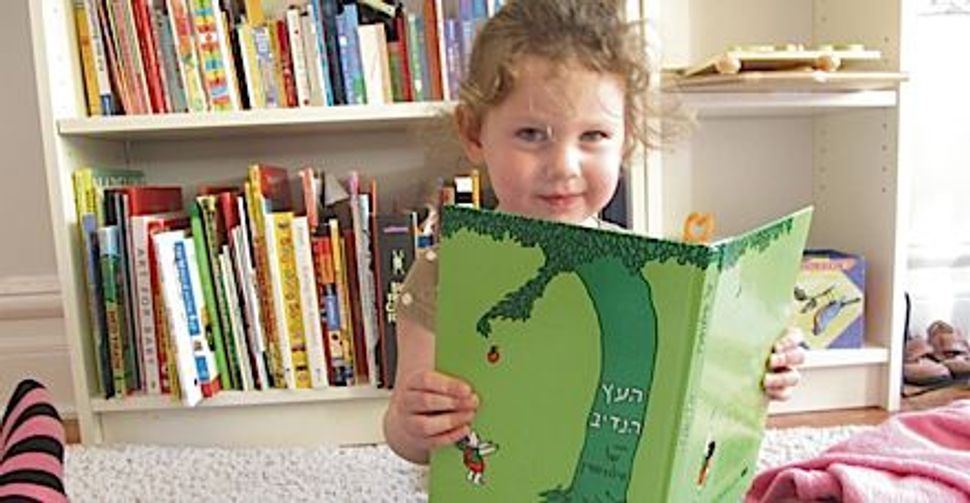 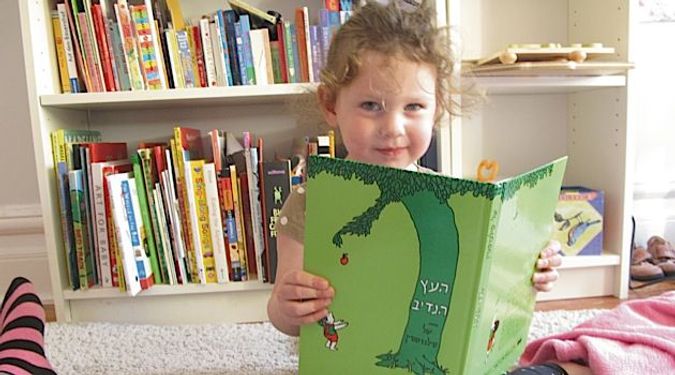 Benefits Abound: Kolben hopes her daughter, Mika, will learn to speak Hebrew (not Spanish) with some help from Dad. Image by deborah kolben

The other night, I handed my daughter, Mika, a plate of chicken and carrots for dinner. She glanced at it momentarily before professing snidely, “Mama, this is not delicioso!” The declaration was remarkable for two reasons: The first was that I had made dinner, the second that my 2.5-year-old cracked a joke. Her hero, Dora the Explorer, calls everything she eats “delicioso” and everything she does “excelente”; the piece of schnitzel I made was clearly neither. Another amazing thing about this was that my daughter used a word in Spanish — correctly. Granted, we’re not raising her to speak Spanish. We are hoping for Hebrew.

When Mika was born, my husband and I decided that we wanted her to be bilingual. My husband’s parents are Israeli immigrants, and he was born in this country shortly after they arrived. Until he went to school, Hebrew was his only language. (My Hebrew is limited to what I learned in Hebrew school, which, unfortunately, wasn’t much.)

And so, starting when Mika was just a few months old, before she could understand even a word, he spoke to her almost entirely in Hebrew. He sang her quiet lullabies at night. I was Mama; he was Aba (Father). Mika’s first word was or (light).

But as she got older, the Hebrew thing got harder. Mika’s baby sitters spoke English. Her mama spoke English. Aba soon felt like he was facing an impossible task. The more English that Mika understood, the harder it became to speak to her in any other language. My husband, who works long hours, had so little time with Mika that when he was with her he wanted her to understand him.

So slowly we began to justify not speaking to Mika in Hebrew. We came up with 100 excuses and 100 ways to rationalize that it wasn’t just laziness.

We knew a woman in the neighborhood who spoke to her daughter exclusively in Estonian. I should have been sensitive to this, but honestly, she was hard to be around. At times I wanted to turn to her and say, “Would it kill you to speak English when there are other people around?”

Then, this past March, The New York Times published an article about “Why Bilinguals Are Smarter.” Unlike when we were growing up (in the dark ages of the 20th century), and speaking a second language was considered a hindrance that could stunt your academic and intellectual development, this new research contains evidence that speaking two languages can have a “profound effect on your brain,” improve cognitive skills and even ward off dementia in old age.

So now, on top of our guilt that Mika couldn’t easily communicate in my husband’s mother tongue came yet another way that we were screwing her up.

The problem was that everybody was extolling the benefits of bilingualism but nobody was laying out for us a plan for how to enforce it. Matt Gross, a travel writer for The New York Times who also blogs at Dadwagon, recently wrote about raising a bilingual child (his wife speaks Chinese).

After spending three weeks with his 3-year-old in Taipei, Taiwan, Gross was impressed with how well his daughter could communicate in Mandarin. So he decided to offer up a short tutorial on how to do what he’s done. It boils down to three main points: 1) The foreign-born parent must speak the foreign language to the kid as often as possible, even if the spouse doesn’t understand; 2) the parent must surround the kid with foreign language material, and 3) the kid should attend bilingual preschool.

But the thing is, even for those parents who do figure it out, there still remain some unintended consequences. My friend Sarah Tuttle-Singer moved with her two kids to Israel from Los Angeles. The kids now speak Hebrew fluently, but she complains that they will no longer speak a lick of English. They refuse to even call her “Mom,” insisting instead on “Ima.”

“I think the hardest part about raising a bilingual child who prefers the ‘other’ language is that it makes me feel like I’m losing an emotional connection to them,” Tuttle-Singer said. “Since so much is conveyed through language, when I feel like we aren’t able to communicate freely in my native language, it makes me feel a stunning disconnect.”

Even though it’s frustrating, I still want Mika to speak Hebrew, and not just because it may make her smarter. A good half of her family lives in Israel, and I want her to feel just as connected to them as she does to her aunts and uncles and cousins here. I think that speaking Hebrew will give her a firmer connection to Judaism, in whatever way she chooses to practice it.

My husband, Mika and I are traveling to Israel for two weeks in April. In preparation, my husband began speaking to Mika in Hebrew again. When he asked her if she wanted Safta (Grandma) in Israel to get her a matana (gift) that was gadola (big) or ktana (small), she appropriately chose the larger one. And when he asked what she was going to say to Saba (Grandpa) and Safta when they picked her up at the airport, she smiled and screamed, “Hola! ”

We still have our work cut out for us.