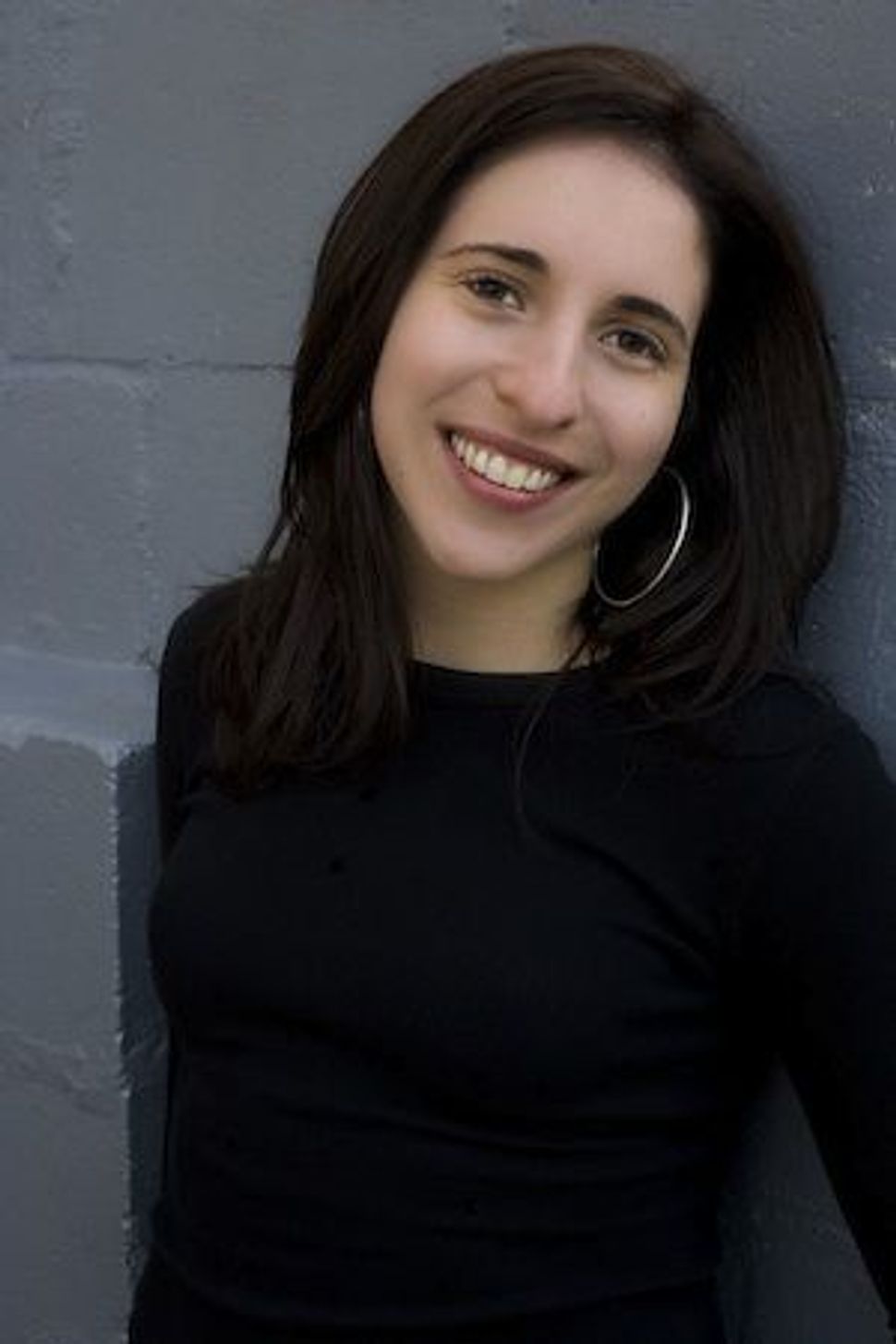 Journalist, blogger (and Sisterhood contributor) Dvora Meyers is out with her first book, a self-published collection of six essays titled, “Heresy on the High Beam: Confessions of an Unbalanced Jewess.” In the essays, Meyers, who was brought up Orthodox, examines her childhood and young adult years through the lens of her obsession with gymnastics — both as an athlete and a spectator.

Meyers shares with her readers her triumphs and hardships at the gym and at home in Brooklyn, where she was raised by her mother following her parents’ divorce. After undergoing back surgery for severe scoliosis, Meyers returned to gymnastics for a time. Eventually, however, as Meyers began to shed her religiously observant lifestyle, she also found a different physically demanding activity to love: break-dancing.

Meyers spoke with The Sisterhood about writing “Heresy on the High Beam,” what she learned from the process, and the role gymnastics still plays in her life.

Renee Ghert-Zand: At what point did you decide to write a memoir, using gymnastics as a lens to examine your life?

Dvora Meyers: It started off very innocently. I was starting grad school and I was trying to figure out what to write for my first workshop. It just struck me that at 23, I was as obsessed with gymnastics as I’d ever been. I didn’t do the sport anymore, and I wasn’t that good. But I started to have this sense that the strength and ferocity of this obsession could imply something deeper. My professor said to me, “You’ve got this whole Potok thing, but about gymnastics.”

I decided more recently that at some point I was going to have to look them over, finish them, fix it, put it out there in some form. A month or so before I turned 29, I decided I didn’t want to go into my 30s with this project anymore. I just wanted it out there and I could move on.

To what extent was writing “Heresy on the High Beam” a journey of self-discovery?

The process has been going on for years. It’s been a start-and-stop process. The final process didn’t yield anything in terms of self-discovery, because I had sat with these ideas for such a long time and I had largely figured them out.

I think a more recent discovery was the physical basis of my feminism. It’s not just a purely intellectual, “I’m as smart as anyone else.” There’s a real body component, which is an interesting thing to hit upon.

Did writing a memoir about your obsession with gymnastics give you a clearer perspective on yourself as a child?

I don’t like to pathologize, like to say the only reason I did gymnastics was because my parents were getting divorced. I had a lot of fun there, too. It wasn’t just strictly an escape coping mechanism. But it definitely made me realize that in many ways that my childhood self was probably a lot smarter than I gave her credit for.

I was so obsessed with gymnastics after I found out I was having surgery that it was like a whole other level. In many ways, I didn’t process the risks of the surgery, which was probably a good thing. So the whole time, all I was thinking over and over was that I can’t do a handspring anymore, which was this horrifying thought— which saved me from having even more horrifying thoughts like I may not walk again after this. So in many ways, I look back and see I was crazy, but also sort of smart and protecting myself pretty well.

Writing the essays helped me figure out how I related to my parents, especially my mom, because that is the more enduring parental relationship that I have. I write about her a lot because in many ways it’s easy. She’s a three-dimensional character to me because she’s been around my entire life. What I feel about her and know about her will carry through, and she’ll come through — despite the flaws — as someone who loves me, took care of me and really did her best for me.

With my dad, I don’t have that. He’s not a fully fleshed out character in my life, so it is hard to write him that way. I didn’t want it to come off being unfair to him, so that was very difficult.

Has your newfound interest in break-dancing replaced your obsession with gymnastics?

Breaking gave me something that I could do…I’m still limited, there are still things I can’t do because of my back. It gave me enough that I could do, and I didn’t have a past set of experiences that I could compare it to, so there was no self-loathing involved. It was also around a time when I was religiously transitioning. [I]t helped with the transition, and it gave me a community of people so if I was leaving the Orthodox community in some form, at least I wasn’t going out there and going it alone. I had another small community based around a subculture, again.

As a fan of gymnastics, that has not abated. I cover events and I’ve had a gymnastics blog, Unorthodox Gymnastics for five years.

Is “Heresy on the High Beam” just the first in a line of memoirs that we can expect from you?

I think I’ve scratched whatever itch I need to scratch in terms of writing about myself. I’d like to do more long-form writing, more reporting, more about other people.